Cox Confident in Cyberknife Ahead of $3 Million Pegasus World Cup 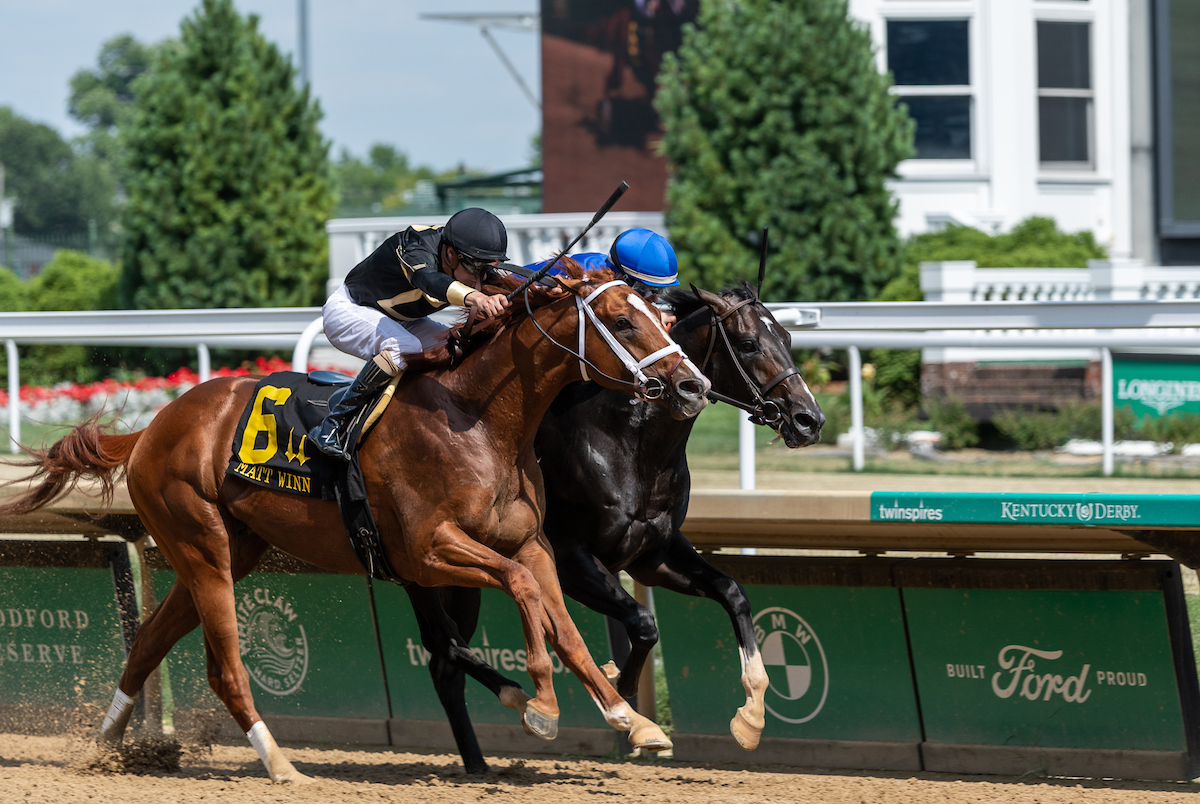 HALLANDALE BEACH, FL – Two-time Eclipse Award-winning trainer Brad Cox says he’s as expectant of a big performance on Jan. 28 by Gold Square LLC’s Cyberknife in Gulfstream Park’s $3 million Pegasus World Cup Invitational (G1) presented by Baccarat as he was with Knicks Go the past two years. Knicks Go won the 2021 Pegasus to kick off what proved to be a Horse of the Year campaign and was second last year behind Life Is Good, a finalist for 2022 Horse of the Year.

“It’s going to be a good race,” Cox said by phone from New Orleans. “We felt confident with Knicks Go both times. He ran two great races. Obviously, one was a winning effort and the other was second to a very, very good horse. I feel every bit as confident with this horse as I did with Knicks Go the two previous seasons.”

Cox loves what he’s seeing in Cyberknife’s training since the likely Pegasus favorite finished second by a head behind favored Cody’s Wish in the $1 million Breeders’ Cup Dirt Mile (G1) at Keeneland, including another powerful workout Sunday morning at the Fair Grounds. With jockey Florent Geroux aboard, Cyberknife worked five-eighths of a mile alongside multiple stakes-winner Warrant in 1:00.60 before working on past the wire to finish in 1:12.60 for six furlongs.

Cox said Cyberknife galloped out seven-eighths of a mile in 1:25.40. Warrant’s official work time of 1:00.60 was the fastest of the morning among 44 works at the distance. Cyberknife was the only horse to work three-quarters of a mile.

“I feel we’re right where we need to be for him to run a big race,” Cox said. “We’ve got one more work here at the Fair Grounds, and then we plan on shipping that following Monday.”

The Pegasus will be the career finale for Cyberknife, a son of 2017 Horse of the Year and 2018 Pegasus winner Gun Runner, before retiring to stud at Spendthrift Farm in Lexington, Ky. The now 4-year-old colt will try to tack on another Grade 1 to go with victories in the Arkansas Derby and Haskell Invitational. He also was second in the Travers (G1) and third in the Pennsylvania Derby (G1) during last year’s $2 million season.

The 6-year-old son of Bernardini, who has won 10 of 20 starts and $2.3 million, will be making his first start since finishing fifth in the Lukas Classic (G2) Oct. 1 at Churchill Downs.

“He went very well this morning,” Hall of Fame trainer Bill Mott said. “I was happy with him. He galloped out well and cooled out. It’s looking like he’s coming into the race well.”

Consecutive winner of the Charles Town Classic (G2) and Alydar at Saratoga and the 2021 Woodward (G1), Art Collector was originally being considered for the Cigar Mile (G1) Dec. 3 at Aqueduct and Harlan’s Holiday (G3) Dec. 31 at Gulfstream, the local prep for the Pegasus.

“We were thinking of the Cigar Mile, but we lost some time with him due to a foot abscess,” Mott said. “Then we considered Harlan’s Holiday, but we felt we just needed more time.”

Jet Set Racing Stable’s Super Corinto breezed a half-mile in 49.03 seconds at Gulfstream Park Sunday morning in preparation for a start in the Pegasus World Cup.

The work was the fifth in a series of works since the Amador Sanchez-trained 5-year-old captured a Dec. 8 optional claiming allowance at Gulfstream. The Argentine-bred son of Super Saver was a Group 1 winner in Chile before being sent to Sanchez, for whom he finished second behind Chilean Group 1 winner O’Connor in his U.S. debut Nov. 12.

Both Chilean imports, who took turns beating each other in Group 1 races before heading to the U.S., are among the 12 horses invited to the Pegasus World Cup.

Everything Clicking for Ivar Heading into G1 Pegasus Turf

After Ivar encountered a couple of setbacks the past couple of years, trainer Paulo Lobo is happy that everything has been clicking for the 7-year-old Brazilian-bred horse heading into Gulfstream Park’s $1 million Pegasus World Cup Turf Invitational (G1) Jan. 28.

Ivar had his penultimate Pegasus Turf work Saturday at The Thoroughbred Center in Lexington, Ky., tooling five-eighths of a mile in 1:02.

“Ivar is ready,” Lobo said. “His work [Saturday] was very good, in company nice and easy, like he likes to do. His final work will be next Saturday here, and then we’re going to ship him either that Monday or Tuesday.”

Ivar has competed in the past three runnings of the $2 million Breeders’ Cup Mile (G1) on turf. He finished fourth by a total of one length at Keeneland this past fall, third in 2021 at Del Mar and another good fourth at Keeneland in 2020. Six of the eight horses that finished in front of Ivar in those races came from Europe.

“I think his race was very good,” Lobo said of the 2022 Breeders’ Cup Mile won by European standout Modern Games. “He lost to a very top horse. Javier Castellano was riding him for the first time. He rode a very good race, and since then we’ve pointed for the Pegasus Turf and we’ve never missed a day and never had a bad day. Everything that we planned is happening, no problems.”

Ivar won Keeneland’s 2020 Shadwell Turf Mile (G1) in his fourth U.S. start after being a leading 2-year-old in Argentina. Lobo has had to adjust plans at times the past two years because of minor issues and turf cancellations. Ivar ran only three times in 2021 and four times last year, when he resumed competition off an eight-month layoff to win the Jonathan B. Schuster Memorial at Horseshoe Indianapolis. He was second in his two starts before the Breeders’ Cup, in the Woodbine Mile (G1) won by Modern Games and Keeneland’s Turf Mile (G1), a race Ivar won in 2020.

“We were ready to run last May and had a little foot problem that delayed his first race for 2022,” Lobo said. “But he’s been doing very well since. If you look at his past performances, he’s almost always running in Grade 1 races. It’s always tough. The three times he ran in the Breeders’ Cup, he ran very well. He has been representing America at a top level.”

Castellano will be back on board in the Pegasus, Lobo said.

Lobo said Grade 1 winner In Love will not run in the Pegasus Turf but that the 6-year-old Brazilian-bred mare Justify My Love will compete in the $500,000 Pegasus Filly & Mare Turf Invitational (G1) on the undercard. Like Ivar, Justify My Love is owned by Bonne Chance Farm LLC and breeder Stud RDI LLC and was sired by the Japanese-bred and raced Agnes Gold.

Justify My Love was a Group 2 winner and Group 1 placed in Argentina before being sent to Lobo last year. Off a nine-month layoff, she was sixth in her first two starts before capturing a Churchill Downs’ turf allowance race Nov. 19, her last start.

“She’s a very nice filly,” Lobo said. “It took a little while for her to adjust here, but she had a very nice win at Churchill Downs. She’s in top form now, physically and mentally. I think she’ll run well over there. The race is very tough, but I think she’s going to enjoy a mile and an eighth. She’s training super, this filly. Super.”