“Mike and Mike” Set the Bar for Broadcast Pairings 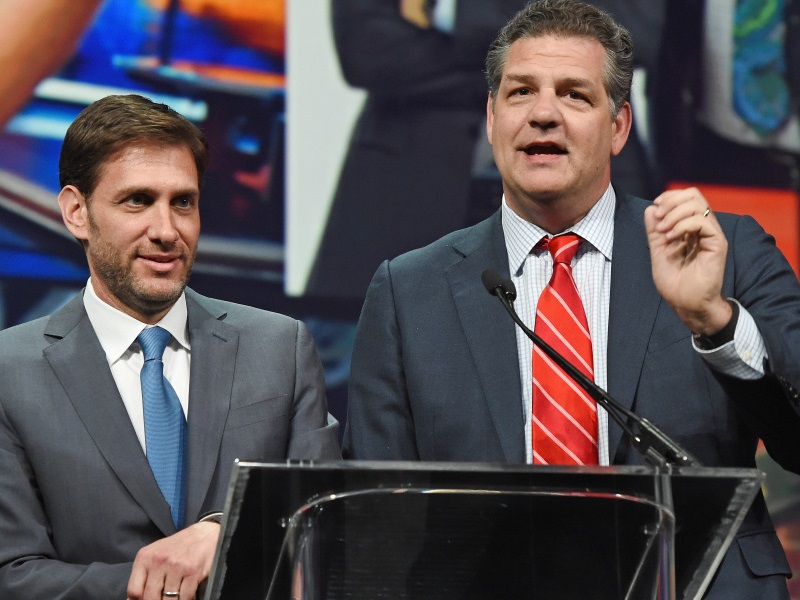 Media partnerships are no different than a marriage. It takes two parties acting together to be successful. If one side fails to pull its weight, the tandem falls on its face. The unbelievable on-air marriage of Mike Greenburg and Mike Golic, ESPN’s “Mike and Mike,” comes to an end Friday after nearly two decades. Sports fans likely won’t put on their socks or drive to work the same way ever again.

Crafting a great on-air team often involves hits and misses. Who could forget Rush Limbaugh added to the ESPN Sunday NFL Countdown team with Chris Berman, Tom Jackson et al? That’s a lot of broadcasting history of legendary success, but a team that lacked continuity in style or thought, and died a short lifespan amid controversy.

But when an on-air team clicks, it’s superior programming. Greenie and Golic obviously had that. They understood their roles, stayed in their lanes and consistently delivered entertaining and informative radio and later TV. They recognized the value of some playful conflict, but never stooped to the click-bait nature of today’s social and even traditional media. They pulled off the nerd vs. meathead jock shtick without taking themselves too seriously. It was magic.

Horse racing has had its successful pairings over the years. Few worked better together than the classy combo of Dave Johnson and Charlsie Cantey; the handicapping ying-yang between country-folk Mike Battaglia and city-slicker Bob Neumeier always made for entertaining segments; and on a smaller, but maybe even longer-running scale, Nancy McMichael and Mark Patterson on Mountaineer’s simulcast feed make you feel like you’re eaves-dropping on their living room conversation before placing your bets.

But broadcasting can be a revolving door, and we seldom get to see extended tandems in our industry. Many rising stars shoot through the circuits and ascend while staying long enough only to expire a half-sheet of return address labels. Often young women are coveted, then passed over in a racing culture that unfortunately doesn’t help itself by begging to get younger. Men seem to be able to hang around in the media and get older and less beautiful; women are held to an unfair standard in that regard.

I would love to see a group get together and stay together for the long haul on racing’s bigger circuits and in national media. Far too often we see teams of broadcasters and racing analysts put together in a mish-mosh manner without the consideration of how they play off of one another. It’s almost as if A+B has to equal C, no matter whom you put in roles A and B. But that’s not how it works. “Mike and Mike” worked because of Mike AND Mike. Often horse racing media personalities fly solo, even when paired with others. The need to dominate the airspace is an unbecoming quality, but predictable at times when you are in the business of trying to prove to people that you’re smarter than everyone else.

XBTV developed a strong tandem before the Breeders’ Cup with Zoe Cadman and Rich Migliore in discussing workouts. As it turned out, the conversation was much better when they ad-libbed between news elements than when they simply were discussing what they saw on video. They had a spark despite two distinctly different personalities. Like “Mike and Mike,” they found a pretty sweet spot as a duet. The same can be said for analyst Jeff Siegel when he teams with either Aaron Vercruyssee or Laffit Pincay III. Siegel is a fountain of knowledge on his own, but he really comes to life when coupled with either of his longtime partners.

I look forward to seeing which tandems in racing broadcasting can stand the test of time. Mike Greenburg and Mike Golic serve as a reminder of how much better two can be than one, even when you’re talking about two supremely talented individuals.