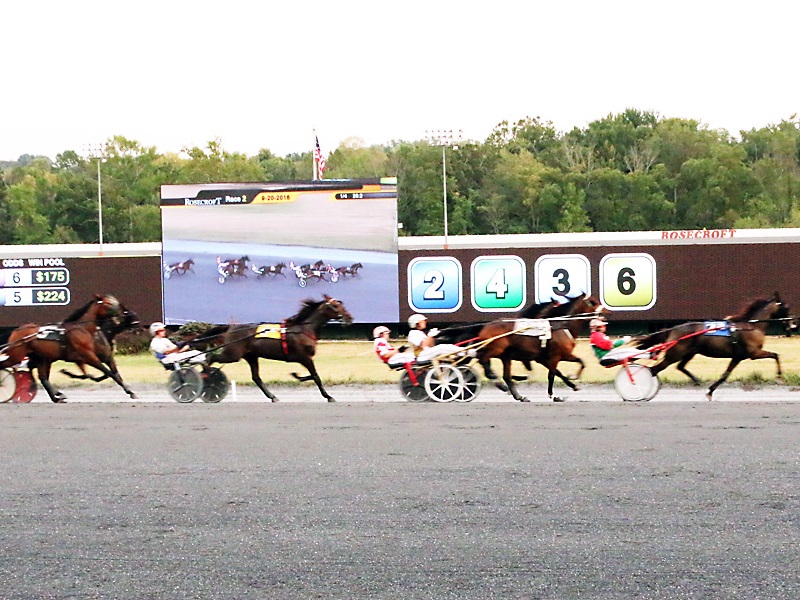 On tap tonight at Rosecroft Raceway is a 12-race card. The feature rolls in Race 8, as seven pacers will compete for a share of an $8,500 purse. The field in Race 8 caught my eye and below are comments on every horse based on a fast track.

1-Abelard Hanover (9/2) - 9-year-old been facing better and has held his own. This appears to be the spot to get the trip he needs, on or close to the lead. Hasn't been able to pass horses in lane so start is key and off 12 days.

2-Beammeupscottie (10-1) - Racing well in 2 straight after a sick scratch and steps up. Looks like a price shot that could be used underneath from this post, but unlikley to hit the top of the ticket versus this field.

3-Jeremes General (8-1) - Has been facing rugged foes and will respect chances to be a player tonight. Hasn't had much success vs. #5, but chances for success go up as he starts inside of main foes.

4-Silver Bullet (7-1) - Can't say a win seems to be in the cards, but competes and usually is around the money. Doesn't have the same gate speed as some others and that makes it tougher, but maybe finds the bottom of the trifecta.

5-Kiss A Dragon (5/2) - Morning line chalk looks like the one to beat. Gets some post relief and Rocktavious is not in this field. But will need a smooth journey to take a picture.

6-Hickory Aloha (3-1) - Having a very nice year facing the top pacers on the grounds. Coming off a sick scratch is a cause for concern and hasn't raced in 13 days. Can beat this field if all systems are go??

7-Sams Triple Crown (3-1) - In from the Big M and off 2 weeks, but is not a toss. Worth respecting but not crazy about the short program odds. Can make some noise if trip works out, especially if #6 doesn't leave.

My key will be #3-Jeremes General as he offers value at the morning line price of 8-1. Also, with main foes in the #5 and #6 posts, Jeremes General should be on the lead or able to get into striking postion to make a charge. Allan Davis is a decent pilot and it's my hope Jeremes General will be overlooked at the windows.