Harness Horse of the Year Battle Going to the Wire 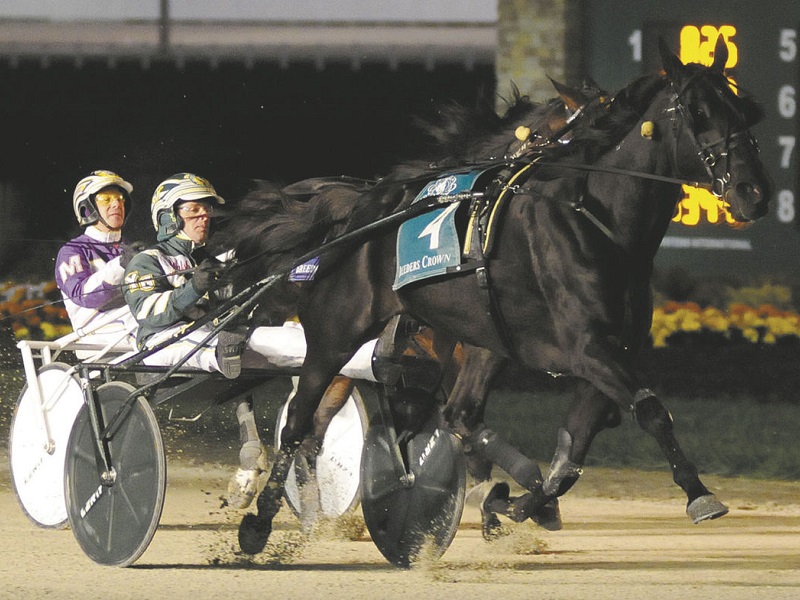 Hannelore Hanover doesn't need to impress Horse of the Year voters, but she did her best to sway a few more of them with a title-defending victory in the $175,000 TVG Mares Trot at the Meadowlands last Saturday.

Hannelore Hanover parlayed a pocket trip into a 2-length victory over pace-setter and Breeders Crown Mare Trot champion Emoticon Hanover in 1:52.3. She won for the 10th time this year and 36th time in a $2.6 million career for trainer Ron Burke.

But even with her prior victory against the boys in the Breeders Crown Open Trot, Hannelore Hanover figures to be in a head-and-head battle with champion trotters Ariana G and Manchego for the top year-end honor.

Ariana G, 12-15 and also a millionaire this year, held the top spot in the Hambletonian Society/Breeders Crown Top 10 poll heading into the week. Manchego remained unbeaten in 12 starts with an easy win in the Breeders Crown 2-year-old Filly Trot last month. Both are trained by Hall of Famer Jimmy Takter.

Yannick Gingras drives all three Horse of the Year contenders and, understandably, would not rank them. "All three of them are really special," he said. "I just wanted to do my job. Now it’s time for the voters to do their job."

IN THE XPRESSLANE: Millionaire stable-mates Downbytheseaside and Fear The Dragon will meet again in the $308,060 Progress Pace finals at Dover Wednesday. Downbytheseaside overcame post 9 and rallied into a sizzling pace to win the Progress elimination by 3 lengths in 1:50.1. ... David Miller drove 3-year-old trotting division leader What The Hill ($12.80) to victory in the TVG Open Trot and he guided Mach It So ($5.80) to a half-length victory in the TVG Open Pace in 1:49.2 ... Smalltownthrowdown, last season's Yonkers Trot runner-up, won his seventh consecutive race in Yonkers' featured $40,000 open trot Sunday. He led from start to finish in 1:56.4 and paid $6.40 to win. ... Fourth Dimension (Brian Sears) emerged as the leading contender for next year's Hambletonian with an easy 1-1/4-length victory in the Valley Victory Stakes at the Meadowlands.