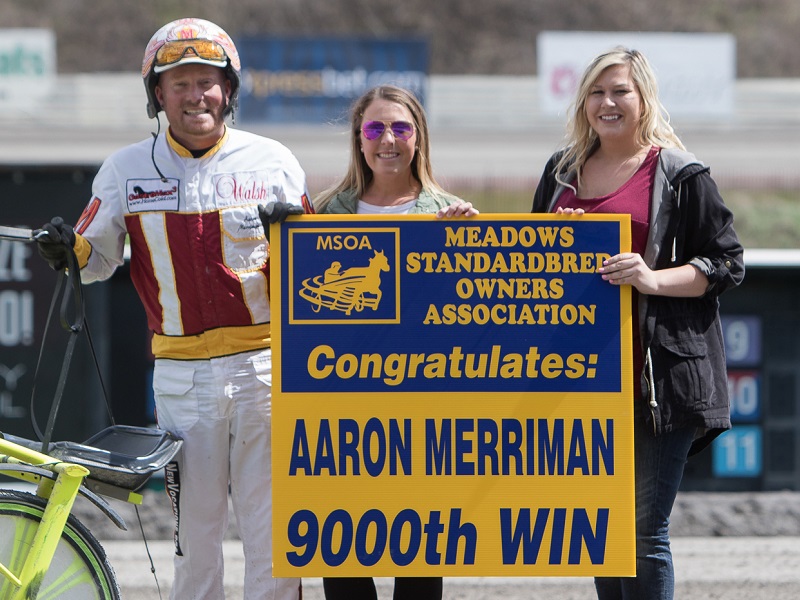 Aaron Merriman became the fourth driver in harness racing history to win 1,000 races in a year when he guided odds-on favorite Official Kisser to victory in the sixth race at Northfield Park last Saturday.

While Tim Tetrick's all-time, single-season record of 1,189 wins in 2007 is safe, Merriman could surpass Walter Case Jr. (1,077 wins) for the second most wins ever.

"A lot of things have to go right to win that many races in a year," Merriman said in an interview with Ken Weingartner of the U.S. Trotting Association. "When I got it, it was just very surreal."

Heading into this week, Merriman drove in 4,327 races this year, mostly at Northfield and at the Meadows. He is the first driver in history to win 800 races in four consecutive years. The 39-year-old is less than 300 wins from 10,000 for his career.

Merriman could divert from his regular schedule and compete in the $25,000 North America Driving Championship January 7-9 at Miami Valley Raceway in his home state of Ohio. The second annual event will be limited to 30 drivers from the U.S. and Canada with the most career wins. Doug McNair took home the $10,000 top prize in the inaugural challenge and will return to defend his title.

Each driver will compete in four races during the first two days, earning points based on their finish. The top 10 point-getters will return for eight drives on the final day.

The Meadowlands hosted the first qualfier for the World Harness Handiapping Championship last Saturday and it will host four more rounds early in 2018. Qualifying rounds are scheduled on Saturdays January 20, February 17, March 10 and April 7, with at least two contestants advancing to the $75,000 finals April 28 at the Big M.

Go to PlayMeadowlands.com for more information.