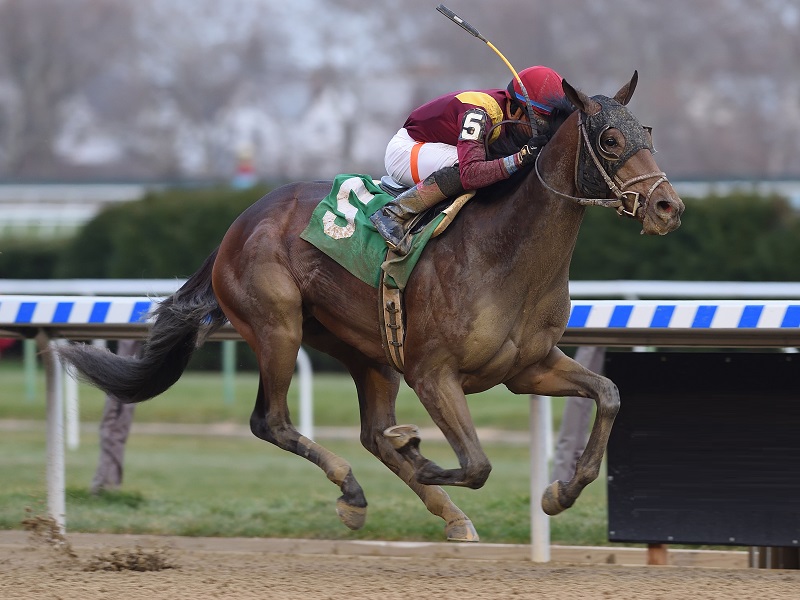 The post-Breeders’ Cup freshman scene typically winds down with the Delta Downs Jackpot. But following this year’s devastating hurricane season in that part of the country, the decision to postpone the event for 2017 figures to have a trickle-down effect. After all, it was just 2 years ago that Exaggerator burst onto the stage at Delta and went on to a Preakness victory and Derby runner-up.

The main beneficiary of the Jackpot’s absence will be Sunday’s $400,000 Springboard Mile at Remington Park. Not only does that burgeoning race fit the calendar and region of the country, but this year the Springboard Mile will offer Kentucky Derby qualifying points for the first time. Those two major points happen to be a coincidence that could really jumpstart this race nationally.

The Springboard Mile is a 2-turn race over a traditional mile oval in Oklahoma City. The field will be drawn Tuesday, and highlights a six-stakes card that also features the $100,000 Trapeze for 2-year-old fillies. G3 Bob Hope winner Greyvitos and G1-placed Bravazo headline the expected Springboard Mile entrants in terms of known resumes. But with juveniles, it’s always about ceiling and not credentials this time of year.

The Springboard Mile will be the fourth major 2-year-old route stakes since the Breeders’ Cup. These page-turning events annually are led by the Kentucky Jockey Club at Churchill Downs, the Remsen at Aqueduct and the Los Alamitos Futurity.  We know what we have from the BC Juvenile in Good Magic, Bolt d’Oro et al. But what has transpired since to lead us into the 2018 sophomore class?

It’s been since Super Saver in 2010 that a KJC winner factored in the Triple Crown. Winning alumni like McCracken, El Kabeir and Gemologist have had some trail impact in recent years. The Nov. 25 renewal of this 1-1/16 miles race looks to be a pretty legitimate contest at this point, won by well-bred Enticed. The Kiaran McLaughlin trainee had been third in the G1 Champagne just behind eventual BC Juvenile champ Good Magic, so his KJC score did not come out of the blue. By Medaglia d’Oro out of It’s Tricky, there’s plenty to look forward to in future routes. Meanwhile, Kentucky Jockey Club runner-up Tiz Mischief was one of the most impressive 2YOs I scouted during the 2017 Keeneland Fall Meet. We could know even more about this race’s depth after Bravazo’s expected reappearance in the Springboard Mile on Sunday.

The last Remsen winner to light the board in a Triple Crown race was ’05 victor Bluegrass Cat, runner-up in the next spring’s Derby and Belmont. No Remsen champ has won a TC event since Go For Gin’s 1994 Kentucky Derby splash in the mud. Critics are tough on the Remsen for those reasons, and its 1-1/8 miles distance so early in the career likely contributes to it being a funky race moving forward. Simply put: most all 2YOs have no desire or real ability to run 9 furlongs this soon. With that, the 2017 winner Catholic Boy still will have some lingering dirt questions to answer come spring. Was he simply more developed than his dirt brethren when moving from turf and scoring Dec. 2 at the Big A? We’ve seen many Remsen winners turn out to be better turf horses – think Court Vision, and even Mo Town from last year and his recent Hollywood Derby success. Runner-up Avery Island will have to bounce back some at Gulfstream, but has the pedigree and talent; Vouch appears to be a rising player for a crafty Arnaud Delacour barn that could be among the horses to watch at Tampa. A time of 1:52.50 here doesn’t inspire you to think this is a historic Remsen, but we saw Honor Code, Cairo Prince and Wicked Strong crawl even slower here in 2013 and they turned out just fine.

Saturday’s Los Al Futurity edition left as many questions as it did answers; so it is, at a minimum, one of the most intriguing launching pads into 2018. Breeders’ Cup Juvenile runner-up Solomini was disqualified and placed third after the race's leading trio exchanged bumps and shoves in the final furlong. Whether you agree with the DQ or not, the fact that neither Solomini nor ballyhooed stablemate McKinzie was able to separate from the pack is a bit concerning. Instilled Regard moved forward enough to sandwich himself squarely in the middle of the Baffert club. Either they’re all three major players, or they’re three horses heading different directions of progression. This race has had an eerie history of disappointment in terms of health. Winners like Mastery, Shared Belief, Violence et al never made it to the Triple Crown. Point Given’s 2001 Preakness and Belmont wins are the last in the TC series by a Los Al/Hollywood Futurity alum.