Girvin is Heads Above in Ohio Derby 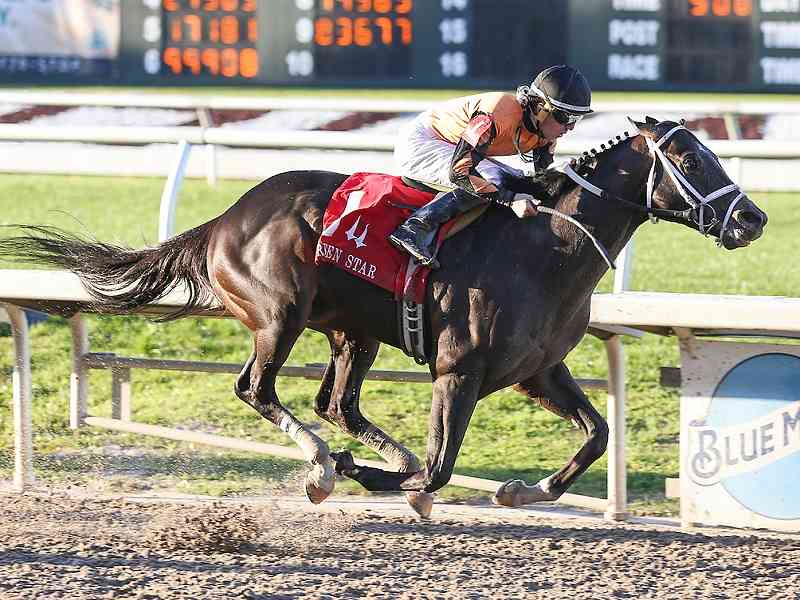 Let's face it - when ranking the epicenters of thoroughbred racing, Cleveland, Ohio probably doesn't fall very high on the list.  Lexington, Louisville, Arcadia or Saratoga it is not.  But for one day a year at least, it does rank that high.  And that day is this Saturday, as Jack Thistledown Racino hosts the Grade 3, $500,000 Ohio Derby.

And with four Kentucky Derby alums entered, along with Hall of Fame jockeys Mike Smith and Kent Desormeaux and conditioner, Steve Asmussen, this year's Ohio Derby looks like a good one.  Maybe this race will never attract the Derby winner.  Or the hot Triple Crown horse.  That's alright.  The Ohio Derby is the kickoff of the (very unofficial) Summer Derby Series, which snakes through Ohio, Indiana, Iowa, West Virginia and Pennsylvania and rewards participating horses with massive purses in graded races.

Without further adieu, let's take a look at this year's Ohio Derby field –

1. Talk Less (Radosevich/Colon) - 12/1
You have to really admire owner, Ron Paolucci.  This is his race.  Most owners have their sights set on the Kentucky Derby.  Or the Travers.  Or the Breeders' Cup.  'Loooch' wants the Ohio Derby.  This is his hometown race.  And he sends out a three-pronged attempt to win it this year.  The first of his entrants is Talk Less, a son of Blame who has won two consecutive races - his first two tries on dirt - since moving to the Jake Radosevich barn.  Those Beyers came back light (68 both times) and this is a big step up in class.  On the bright side, he gets the hottest jockey at Thistledown, 34% rider, Luis Colon, and if you bet him, you get two other horses for free.

1A. Vibe (Hess/Feliciano) - 12/1
The second of the Loooch trio, Vibe kicked off his career in Southern California against the likes of Gormley, Colonel Samson, Term of Art and Klimt.  He's competed in three stakes races, but has yet to find the board in one.  He did win a first-level allowance race at this distance last out at Churchill Downs on a wet, sealed track, but like his stablemates, the water than he's shown capable of handling.  He did earn a 79 Beyer for that Churchill win, and it did come at this 1 1/8-mile distance, so he's checked that box at least.

1X. Game Over (Radosevich/Radosevich) - 12/1
The third of the Loooch entry, Game Over is at least right now, arguably the most talented.  A perfect 2-for-2 in his young career, he has won sprint races at Oaklawn and Churchill, with escalating Beyers (78 to 84) in tow.  That said, what a tough step up in class.  His pedigree - by Mineshaft and out of a Soto mare - indicate the added distance is within his scope, but getting it in a Grade 3 off just two career starts won't be simple.  Worth pointing out that the barn's go-to rider, Luis Colon, was named on Talk Less, but you have to feel a little positive that the barn purchased this one privately after his last start with this race in mind.

2. Irap (O'Neill/Leparoux) - 3/1
It's hard to believe there were much more shocking winners in the 100+ year history of Keeneland's Blue Grass Stakes than Irap, who traveled to Lexington as a maiden and left a Grade 2 winner.  And those who backed him in the Blue Grass were rewarded with odds of 31/1.  But before we admire him for having turned a significant corner, let's remember that his Blue Grass win was sandwiched between big defeats - prior he was 4th, beaten 8 1/2-lengths in the Sunland Derby, and after he was 18th, beaten 40 3/4-lengths in the Kentucky Derby.  I'm of the belief that he took advantage of an easy lead and a speed-favoring strip to win the Blue Grass.  Plus, McCraken not being fully cranked likely helped the cause.  But hey, Irap won and, even better, he reunites with Julien Leparoux here.  It's tough to get a read on the pace scenario, but it shouldn't be fast, which will bolster his chances.  I'm not a huge believer in him, but he is likely the one they'll need to catch when the field turns for home.

3. Untrapped (Asmussen/Santana Jr.) - 9/2
You can't help but admire a horse that has danced every dance this year, as the Ohio Derby will be Untrapped's sixth graded stakes try of the season.  In just under six months, he has finished 2nd in the Risen Star (Gr II) and LeComte (Gr III), 3rd in the Rebel (Gr II), 6th in the Arkansas Derby (Gr I) and 12th in the Kentucky Derby (Gr I).  Unfortunately for the connections, there are no wins in that span and while he has always been well-backed at the windows (the Kentucky Derby was the first race he started at odds higher than 9/1), he hasn't delivered his backers a win since last November.  In my eyes, he's simply a horse that isn't interested in winning races.  Use him in your Trifecta, and maybe your Exacta, but I won't be backing him in the top spot.

4. Sorry Erik (Desormeaux/Desormeaux) - 6/1
The Desormeaux brothers make the trek from Los Angeles to Cleveland with Sorry Erik, a 3-time winning son of Wilburn.  But before we get too giddy about those three wins, it's fair to point out that two of the three came in claiming races (he was claimed for $20,000 in January from Paul Reddam) and the third came in an optional claiming event where he was entered for a tag.  He faced off against Girvin twice this spring at Fair Grounds, but was beaten by 5 1/2-lengths in the Louisiana Derby (Gr II) and 10 1/2-lengths in the Risen Star Stakes (Gr II).  He finished second last out in his comeback race on the turf, a solid performance.  It's also one he'll need to improve upon if he's to factor here.  The 6/1 morning line price feels awfully low and I won't be surprised if he slides up from there.

5. Girvin (Sharp/Smith) - 2/1
For me, this should be the overwhelming Ohio Derby favorite. Yea, he tried the Kentucky Derby with relatively forgettable results - he was 13th, beaten 19 1/2-lengths, under the Spires.  But given the circumstances surrounding that defeat - his foot issues, the sloppy going, speed-favoring track and traffic trouble he encountered that day - make me very willing to toss the Derby.  He's been working with regularity since late-May which leads me to believe his health troubles are behind him, and his Derby jockey - Mike Smith - make a cross-country trip to ride him.  Smith generally doesn't travel for the sake of seeing new cities and when he's in town, he’s generally sitting on a live mount.  If he gets a clean run and Irap doesn't get loose on the lead, I think we're looking at the 2017 Ohio Derby winner.

6. Fast and Accurate (Maker/Houghton) - 8/1
The 17th-place finisher in the Kentucky Derby, Fast and Accurate gets back to dirt racing after a relatively mediocre try in the Arlington Classic (Gr III) last out in Chicago.  He was beaten 8 3/4-lengths that day, which is cause for concern.  His resume is bolstered by a win in the Spiral Stakes (Gr III) at Turfway, a track for which he showed his affinity with two straigh wins last winter.  The problem...he's just 1-for-6 elsewhere.  And he was beaten 28 3/4-lengths and 11 3/4-lengths in his two prior dirt tries.  His only victories have come on the turf and synthetic, and I don't think it's much of a stretch to say that trend will have continued once they've crossed the line Saturday.

7. Hinton (Drury/McKee) - 20/1
The longest shot on the board, Hinton would be quite the shock for conditioner, Thomas Drury Jr.  The son of Candy Ride is 3-for-4 in his young career, but that's where the good news ends.  The wins came against far inferior competition at Belterra Park and Turfway Park, and he's yet to run in a stakes race.  His career high Beyer is just 75 and his lack of early speed and outside draw aren't to his benefit in a race like this.  Veteran jockey, John McKee, has the mount.

By the way, I’d be remiss to not give a tip of the cap to Justalittlesmoke, who runs in Race 7, the J. William Petro Memorial Handicap, a race for Ohio-bred fillies and mares going 1 1/16-miles.  All horseplayers can appreciate consistency, so check these numbers out.  This mare is 14-for-22 in her career with earnings of $677K.  She’s 12-for-15 on a fast dirt track.  She’s 9-for-14 at Thistledown.  She’s 7-for-9 in 2016 and 2017.  Credit to trainer, Robert Gorham, owner, Mast Thoroughbreds and jockey, Terry Houghton, and all of the people behind the scenes for her remarkable career!  She’s a single in my Pick 4.