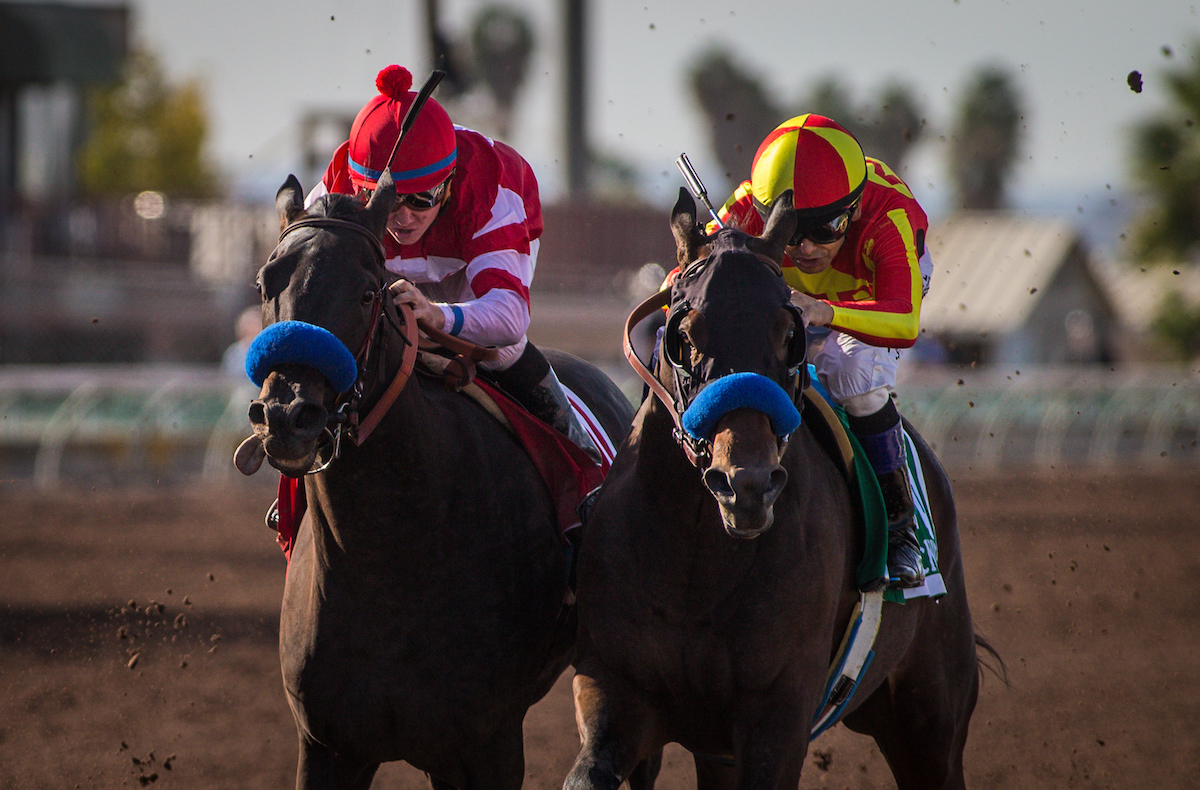 The evidence is mounting that the Southern California-based 3-year-olds are strong in 2018.

This brings to mind what happened during a recent three-year period in the Triple Crown races. SoCal based 3-year-olds enjoyed considerable success in these historic races from 2014 through 2016, winning seven of the nine.

SoCal-based California Chrome won the Kentucky Derby and Preakness Stakes in 2014 before he was thwarted in his bid for Triple Crown glory by finishing in a dead heat for fourth in the Belmont Stakes. Tonalist won the Belmont after having raced in Florida and New York earlier in 2014.

In 2016, SoCal-based Nyquist won the Kentucky Derby and SoCal-based Exaggerator took the Preakness. Creator, stabled in Louisiana (at the Fair Grounds) and Arkansas (at Oaklawn Park) early in the year, captured the Belmont.

In 2017, SoCal-based horses were shut out in the Triple Crown races when East Coast runners Always Dreaming, Cloud Computing and Tapwrit won the Kentucky Derby, Preakness and Belmont, respectively.

SoCal-based Greyvitos invaded Remington Park in Oklahoma and won the Springboard Mile by 2 1/4 lengths on Dec. 17. That was something of a hint at the possible quality of the SoCal 3-year-old class of 2018. Unfortunately, all was not well with Greyvitos after the Springboard Mile. Daily Racing Form’s Steve Andersen reported on Jan. 5 that the Virginia-bred son of Malibu Moon is on the shelf after undergoing surgery to have a bone chip removed from a knee. Greyvitos’ trainer, Adam Kitchingman, is hoping the colt can return to racing as early as April.

Last Saturday in New Orleans, SoCal-based 3-year-old Instilled Regard raided the Fair Grounds to win the Grade III Lecomte at one mile and 70 yards. He prevailed by an emphatic 3 3/4 lengths for Hall of Fame trainer Jerry Hollendorfer as the 2-1 second choice in the wagering. Principe Guilherme, the 6-5 favorite, finished second for fellow Hall of Fame trainer Steve Asmussen. In fact, Asmussen-trained sophomores finished 2-3-4 in the Lecomte. Snappy Sinclair ran second at 28-1, while Zing Zang ended up fourth at 24-1.

And then at Oaklawn Park in Arkansas on Monday, another SoCal-based 3-year-old succeeded, this time in the one-mile Smarty Jones. Mourinho, backed down to 3-5 favoritism, registered a sparkling 3 3/4-length victory in front-running fashion for Hall of Fame trainer Bob Baffert. This time Asmussen-trained runners finished 2-3. Combatant ran second after also having been the runner-up to Greyvitos in the Springboard Mile. Tap Daddy got the show dough in the Smarty Jones.

Instilled Regard climbs to No. 2 this week on my Kentucky Derby Top 10 list after he had been No. 6 last week. Here is this week’s Top 10:

In Instilled Regard’s final 2017 start, he held his own vs. two of the leaders of his class in SoCal, Solomini and McKinzie, in the Grade I Los Alamitos CashCall Futurity on Dec. 9.

In Installed Regard’s first 2018 start, he came home energetically to win the Lecomte on the main track at the Fair Grounds when ridden for the first time by multiple Eclipse Award winner Javier Castellano. The length of that stretch to the finish is 1,346 feet.

Heading to the far turn, Castellano then appeared to push down a bit on the gas pedal. Instilled Regard responded eagerly, but without getting headstrong. The colt advanced on the far turn while racing three wide to take command at the head of the stretch. He drew clear with about a furlong to go and went on to win by daylight. He also galloped out strongly after the finish.

“He’s got a great mind,” said Castellano, “and I like the way that he conducted himself.”

A $1.05 million auction purchase, Instilled Regard lost his initial two races, both sprints. But he blossomed once given the opportunity to run in longer races around two turns.

Instilled Regard exited the maiden ranks with a 4 1/4-length win in a 1 1/16-mile race at Santa Anita on Oct. 29, though his Beyer Speed Figure was just a 74. He then took a big leap in the Beyer department by recording a 92 in the 1 1/16-mile Los Al Futurity, a career-best figure that he matched in the Lecomte.

These are the Beyer Speed Figures for winners of the Lecomte going back to 1992:

Instilled Regard has quite an interesting pedigree. He is a son of Arch and the Forestry mare Enhancing.

Arch’s most significant triumph came in the 1998 Super Derby at Louisiana Downs, back when it still was one of the nation’s most important 3-year-old events. It was a Grade I race in 1998 and had a $500,000 purse. Support for the Super Derby has waned to such an extent that it was an ungraded race on the grass with a $100,000 purse in 2017.

In Arch’s next start after the Super Derby, he won the Grade III Fayette at Keeneland by a neck over Touch Gold. Touch Gold had been victorious the year before in the Grade I Belmont to deny Kentucky Derby and Preakness winner Silver Charm’s bid for Triple Crown immortality.

Frank Brothers trained Arch. Brothers, like so many others, was saddened by the recent death on Dec. 27 of his mentor, Hall of Fame trainer Jack Van Berg.

As a sire, Arch’s most accomplished offspring was Blame, who won the Grade I Breeders’ Cup Classic at Churchill Downs by a head, handing runner-up Zenyatta the only defeat in her extraordinary 20-race career.

On Jan. 20, 2016, Arch died of an apparent heart attack at famed Claiborne Farm in Kentucky.

Forestry is the sire of Instilled Regard’s dam. Forestry also is the broodmare sire of Nyquist, who won the 2016 Kentucky Derby after having been voted a 2015 Eclipse Award as champion 2-year-old male.

Another appealing aspect to Instilled Regard’s pedigree is his second dam, Heavenly Prize, who was voted a 1994 Eclipse Award as champion 3-year-old filly.

In Monday’s Smarty Jones, Mourinho led all the way under Drayden Van Dyke. It was quite a meaningful victory for Van Dyke, a SoCal rider who was raised in Hot Springs, Ark., where Oaklawn Park is located.

Mourinho recorded a career-best Beyer Speed Figure of 99 in the Smarty Jones. He now has recorded two wins and two seconds from four career starts. When he won a six-furlong maiden race by 4 1/2 lengths at first asking at Santa Anita on Sept. 30, Instilled Regard finished third.

While some question just how far Mourinho wants to run, at least the Smarty Jones proved he can get the job done going one mile. This was his first race around two turns. And keep in mind his sire did manage to win a big race going 1 1/4 miles. Mourinho is by 2010 Kentucky Derby winner Super Saver.

On a muddy main track that seemed to favor early speed, Firenze Fire rallied from off the pace to win last Saturday’s one-mile Jerome by a half-length as a 2-5 favorite at Aqueduct. Jason Servis trains the Florida-bred Poseidon’s Warrior colt, who was assigned an 85 Beyer Speed Figure.

Some believe Firenze Fire will be at his best in one-turn races, like the Jerome. His biggest victory so far came in the Grade I Champagne at one mile around one turn. Good Magic finished second, while Enticed ended up third. Good Magic subsequently won the Grade I Breeders’ Cup Juvenile at Del Mar. Enticed went on to win the Grade II Kentucky Jockey Club at Churchill Downs.

Firenze Fire failed to fire in the BC Juvenile at 1 1/16 miles around two turns. He finished seventh and lost by 20 lengths. However, he was sick for a time prior to that race.