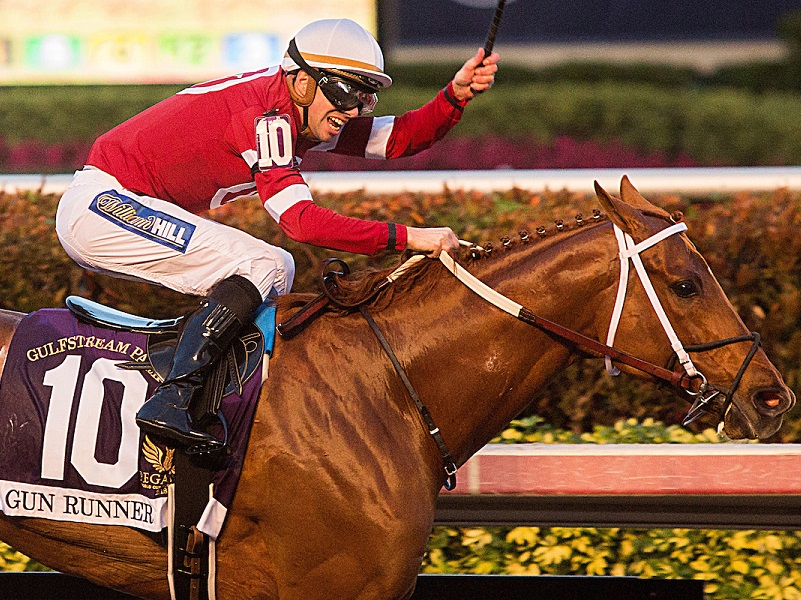 Near the conclusion of Saturday's Pegasus World Championship, 2017 Horse of the Year Gun Runner and jockey Florent Geroux thundered home through a warm, windy Gulfstream stretch and then rode off into the sunset.

He's gone, now. Off to stud. No doubt, already eyeing a few choice mares across the paddock at Three Chimneys in Midway, Kentucky. His profile page on the farm's website is as alluring as a Hemsworth brother. He'll have plenty of 'dates.' Tinder profile not required.

That's great. For him. For racing fans, not so much.

The best against the best at their best is exhilarating. However, following the 2018 Pegasus, yours truly also felt strangely unsatisfied, empty and a bit cheated. Not by the event. Pegasus Part Deux accomplished its mission-to attract the world's best to compete for the world's richest purse. Consternation came with the realization that this really was Gun Runner's finale.

The son of Candy Ride departs while at the sport's pinnacle. Fast, healthy and magnificent. He's the reigning 'Undisputed Heavyweight Champ!' A white-hot winner of 6 consecutive Grade 1 races by an average margin of more than 4 lengths. Perfection in motion!

However, as far as this fan is concerned, Gun Runner has unfinished business on the track. He enters the breeding shed as the second highest-earning Thoroughbred of all time, roughly $1.5 million behind Arrogate--a foe that accomplished something Gun Runner couldn't: Victory in the Dubai World Cup.

And that's what irks me. Gun Runner's career seems an unfinished masterpiece. Mona Lisa minus the smile. David without pecs. American Gothic missing a pitchfork.

In about two months, if he were to hang around, Gun Runner would be 3/5 odds against the world to collect a winner's share of $12 million in the 2018 Dubai World Cup renewal. The $6 million in earnings would vault him clearly atop the money heap, establish the equivalent of an equine-earnings Everest and erase the memory of last season's loss to Arrogate.

Gun Runner might be the greatest Thoroughbred of all time…but we'll never know it for sure. Why? Because, post-Pegasus, in the absolute best form of his life, he's been retired to a life of food, leisure and sex with a harem of beautiful and accomplished mares.

Again, bully for him. Bull crap for us.

Last season, Gun Runner was excluded from the inaugural Pegasus because of a mandatory quarantine at Fair Grounds, in Louisiana, due to an outbreak of the equine herpes virus. Arrogate romped and Gun Runner's camp lamented their horse's absence. Roughly two months later, in the Dubai World Cup, they finally met Arrogate. Breaking lengths behind the field, circling foes throughout and charging through the lane, Arrogate caught Gun Runner on the lead and passed him like he was mired in quicksand. The final margin was 2 ¼ lengths.

Neither runner would ever be the same.

Conversely, Gun Runner never lost another race. Defeat in Dubai proved to be another forward step in an amazingly consistent development that began at 2 and continued through the 2018 Pegasus. Roughly 2 ½ months after Meydan, he dispatched a Grade 1 Stephen Foster field at Churchill Downs by 7-lengths. Then, at Saratoga, he won the Whitney by more than 5 and the Woodward by greater than 10! Despite those dominant victories critics couldn't forget the Dubai defeat. Even though, since last they had met 7 months previous, Arrogate hadn't won and Gun Runner hadn't lost, the former still was a slight favorite over the latter in the Breeders' Cup Classic at Del Mar. As we now know, the public got it wrong. The maroon and white circle and 'W' dominated where 'The Turf Meets the Surf' and Arrogate then retired.

Racing fans have been fortunate over the past few years. Thanks to mismanagement and some unfashionable breeding, we got to enjoy California Chrome for longer than expected. Arrogate raced throughout his 4-year-old season. And, although he doesn't act his age, Gun Runner is now 5. Remember when stars used to retire following sophomore seasons.

Gun Runner ultimately may leave 'money on the table' in Dubai and elsewhere in 2018 but, rest assured, Winchell Thoroughbred and Three Chimneys folks have done the math. They've surely calculated how much more money the horse might earn on the track compared to what he's worth at stud in this bullish market; considered the cost of insurance to keep him racing and analyzed inherent risks in further competition.

In the end, though, 'it's all about the Benjamins.' We can fantasize about competition, sportsmanship and a 'my-horse-is-better-than-your-horse' sentiment. However, when the rubber meets the road, once in a while you 'gotta 'make it rain.' And that's not necessarily a negative. The potential to hit a financial grand slam is a major incentive for folks to invest in horses in the first place. Owning a stud like Gun Runner is like having a license to print money. Legal US tender. Not that counterfeit stuff my uncle used to mint in his basement.

Selfishly, post-Pegasus, I just wasn't prepared to bid farewell to an unfinished masterpiece.