Pegasus Aftermath: Where Do the Runners Go From Here? 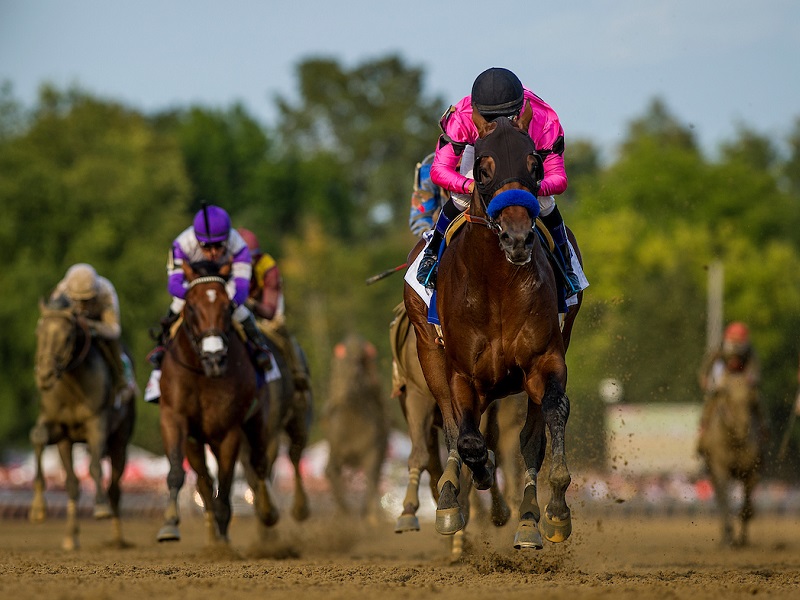 The second running of the Pegasus World Cup at Gulfstream Park was much like the first; a rousing success and a coronation of a super horse on a stage he deserved. Gun Runner heads off to retirement and down the line to the Hall of Fame with another comprehensive victory that reminded us all that horses are actually allowed to run—and thrive—after their 3-year-old season. But what about the rest of the 12-horse field? Let’s take a look just where they might land, in order of their finish, after being left in Gun Runner’s wake.

West Coast (2nd): It was no surprise to see this newly minted 4yo improve on his 3rd-place finish to Gun Runner in the Breeders’ Cup Classic and make the Horse of the Year sweat off the far turn, before ultimately being swatted aside. But the fact he was a football field clear of the rest (10 ¾ lengths, to be exact) says all you need to know, which is he’s about 1/5 right now to be Champion Older Male in 2018. Bob Baffert mentioned the Dubai World Cup as a next possible goal, and it’s hard to argue when West Coast figures about 3/5 in that spot.

Gunnevera (3rd): I never thought much of him, and it’s true he’s better at home at Gulfstream than anywhere else, but he’s made a niche running underneath in some big races (the Travers and BC Classic come to mind) and there’s little doubt he’s going to have a useful campaign. He too is rumored to be heading to Dubai, and while he’s nowhere near in the same league as West Coast, the 1 ¼ miles will be to his liking and running 2nd for $12 million is never a bad thing.

Fear the Cowboy (4th): Yet another Gulfstream lover, you have to give this veteran credit for running 4th at 74-1, as he was outgunned on paper and had never made a dent against a group like this. What that means going forward is yet to be determined, but what is quite apparent is that he has really raised his game in his last two (which includes a fast-figure romp in the local GIII Harlan’s Holiday), and if he stays healthy he’s going to win some middle-of-the-road graded stakes this year and amass a big bankroll in doing it.

Seeking the Soul (5th): One of the more fortunate horses of the past several years to win a GI, this guy is second-tier but is much like ‘Cowboy in that he’ll win some graded stakes this year and make a good living in doing so. That Clark win at Churchill Downs seemed an aberration, as it came in a GII-type of race in very slow time, so don’t be fooled into thinking this is a legitimate GI horse later this year, even though he’s likely to dance a lot of those dances.

Stellar Wind (6th): Much like Gun Runner, she’s off to the breeding shed after a spectacular career that sadly saw her blink when racing’s biggest lights were on (not that she had any business being competitive in a spot like this).

Collected (7th): The biggest disappoint is clearly at a crossroads in his career, which is why Baffert said a return to the turf could be in the cards. Sure, they tried to rate him and he was awful in the GII San Antonio before the Pegasus, but it’s obvious he’s not the same horse who looked like a 50-50 proposition off the far turn of the Classic before ultimately settling for 2nd, or the one that held Arrogate comfortably at bay in the GI Pacific Classic. I’ve seen more than a few people I have a lot of respect for say he could be a crack miler on the grass, which I would agree with if he was at his best, I just fear that a gutty 2017 campaign may have put those days in his rearview mirror.

Sharp Azteca (8th): Raise your hand if you thought this freakishly fast one-turn star was going to be 5th after a quarter-mile? I thought so. So, it’s little surprise he didn’t do any running when he was, for some reason, robbed of the only chance he had, which was gutting the field. With that being said, I still think he can win important two-turn races, though obviously he’s a wildcard in those spots, while he’s hell to pay going one-turn. Assuming he comes out of this the right way, a GI New York double in the 7F Carter and Met Mile later this spring would surprise no one, but the fan in me would love to see him try West Coast one more time going 1 1/8 miles in the GI Whitney this summer at Saratoga.

Giant Expectations (9th): This talented NY-bred predictably chased and tired after his connections gave it the old college try and reminds me of about 6-10 horses in the Kentucky Derby every year, in that they had no business being in the race and may not come out of it all that good after getting their head ripped off. I’d be very leery of this 5yo wherever he shows up next, which will presumably be in a graded stakes at Santa Anita.

War Story (10th): Probably the next big disappointment after Collected, especially after that huge 4th in the Classic, when he was beaten just 4 lengths. Though, in hindsight, aside from the win in the GII Brooklyn at a who cares 1 ½ miles, he was nothing but Gun Runner’s whipping boy while running 4th behind him in a tri of GI’s; the Whitney, Woodward and aforementioned Classic. The good news is that that monster is obviously out of the picture now, the bad news is the slower 4ths in the Whitney and Woodward seem a lot more the rule than the fast 4th exception in the Classic.

Singing Bullet (11th): The longest shot on the board actually beat a horse home, which is another bet I lost on Saturday. At least I’ll have a chance at getting it back when I bet against him in an optional-claimer when he resurfaces next.

Toast of New York (12th): Admittedly, I thought he was a wiseguy exotics player in here after his return win (off a three-year layoff) and the fact he had a huge number on the dirt when 2nd in the 2013 Classic. Obviously, he bombed, but there’s a lot of talent here and I think with a proper campaign, he can win some stakes races this year. Where those take place remains to be seen, as he’s based in Europe.