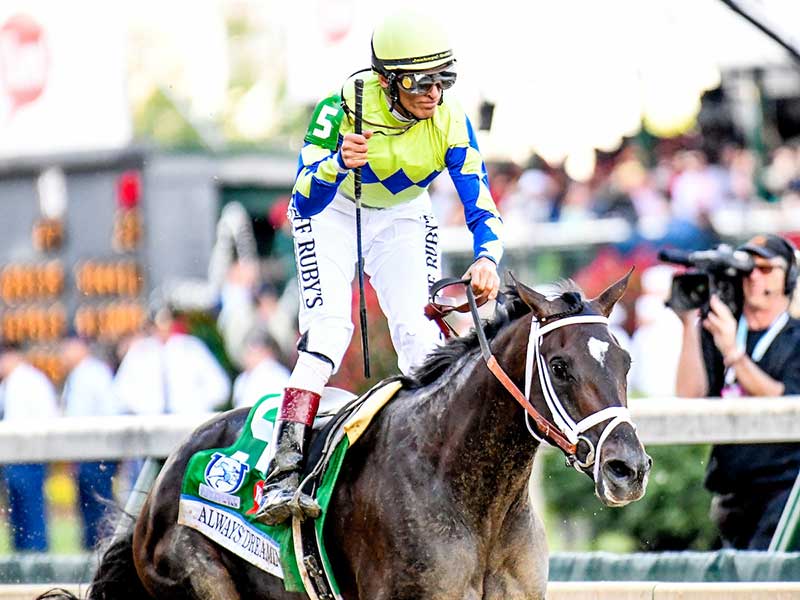 With Valentine’s Day fast approaching (and the prices of roses not coincidentally as rapidly rising), just where does the horse you love for this year’s Triple Crown reside? True, the first Saturday in May is about three months away, but a quick study of the last decade’s Derby winners gives you some idea where you should be by Feb. 14.

Always Dreaming broke his maiden Jan. 25 at Tampa Bay Downs in his sophomore unveiling after 2 losses as a juvenile. He would add an entry level Gulfstream allowance (March 4) and the G1 Florida Derby (April 1) in his 3-prep run to the roses.

Nyquist already had been crowned a 2-year-old champion and was a G1 Breeders’ Cup Juvenile titlist. He had not yet made his 3-year-old debut as of Valentine’s Day, but would do so the very next day on Feb. 15, 2016, a victory in the 7-furlong G2 San Vicente. It would be the first of two preps, followed by a G1 Florida Derby (April 2) score.

American Pharoah pocketed 2-year-old champion honors on the strength of wins in the G1 Del Mar Futurity and G1 FrontRunner. At this time in 2015, he was still exactly 1 month away from his sophomore unveiling in the March 14 G2 Rebel, the first of 2 preps, followed by the G1 Arkansas Derby (April 11).

California Chrome was a 2-time stakes winner at age 2 and had already won the Cal Cup Derby on Jan. 25 of his sophomore season. He would prep 2 more times, winning the G2 San Felipe (March 8) and G1 Santa Anita Derby (April 5) in succession.

Orb won his 3-year-old return Jan. 26, 2013 in a Gulfstream Park allowance and at this stage of the game was still looking to make his stakes debut. He’d do so with a win in the Feb. 23 G2 Fountain of Youth and following month’s G1 Florida Derby (March 30).

Animal Kingdom had yet to start as a 3-year-old at this time in 2011 and had yet to break into the stakes ranks. He returned March 3 with a narrow allowance loss before winning the G3 Spiral (March 26) in his stakes debut. His March 3, 2010 loss by a head is the last time we’ve seen ANY Derby winner lose ANY race as a sophomore on the trail – quite a remarkable fact.

Super Saver, winner of the G2 Kentucky Jockey Club at 2, would not make his 3YO debut until the March 13 G3 Tampa Bay Derby. He followed that third with a runner-up in the G1 Arkansas Derby (April 10).

Mine That Bird was Canada’s champion 2YO of 2008, but had made a barn change over the winter to Chip Woolley in New Mexico and didn’t start until the Feb. 28 Borderland Derby when second. He added a fourth in the Sunland Derby (March 29) before his improbable 50-1 upset in Louisville.

Big Brown had only a Saratoga blowout turf maiden win in his debut on his resume at this point in 2008. He would make his 3YO and dirt debut in an off-the-turf allowance March 5 and come back 24 days later in the G1 Florida Derby (March 29) with a smashing romp.