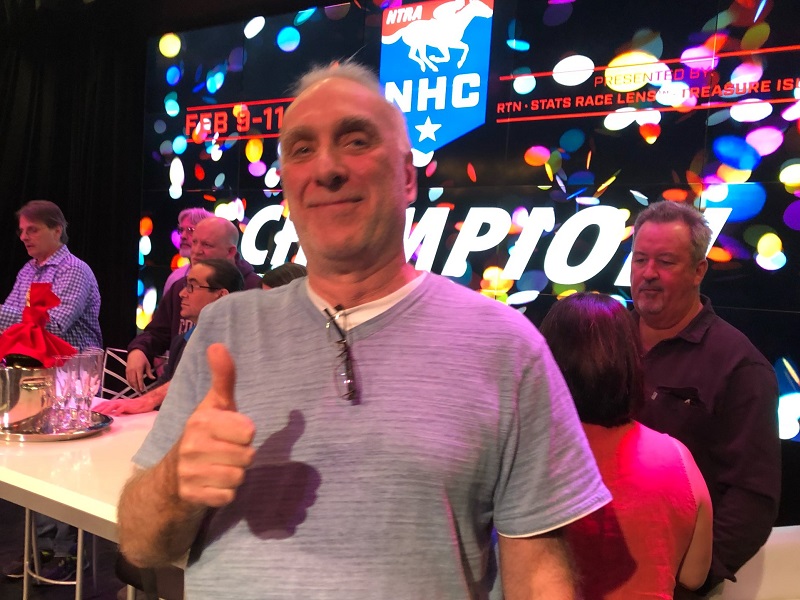 As a former NHC competitor, yours truly bows at the waist to those that emerge from the yearly Treasure Island scrum with a prize. The NHC first demands qualification. No purchase necessary…or even available. The format includes three days-worth of handicapping and muythical wagering. A real grind. Frustrating. Painful. Exhilarating. Depressing. In short…a horseplayer’s dream!

As you can imagine, in an environment containing so much external stimuli it’s difficult to concentrate. But focus is key. Decisions matter. So many decisions. Go with #3 as lone speed at Gulfstream at 15-1 odds? Back #8 at Oaklawn at 7-1 with a much-the-best Thoro-Graph pattern? Or, play #10 at Laurel, a 6-1 shot that’s unbeaten over a wet track?

C’mon, pick one. Clock’s ticking. Or pick two. They’re approaching the gate. Why not play all three? One of them has to win. Right? What if all three win? You’ll be in front. You don’t want to be in front. It’s too early. You’ll become a target. You don’t want to be a target. That’s too much pressure. Don’t be silly, all three can’t win. Just pick one and let’s go. There are like a thousand more races to play. C’mon, they’re at the gate!

According to scientists (presumably), subjects in similar prolonged, close-contact, high-pressure situations, gradually develop a united front against common foes. Even though they actually are in competition they gradually begin to root for each other and against everyone else—especially those whose names appear on the leaderboard. They begin to share success, failure, pain, and frustration. High fives and consoling pats on the back soon are exchanged between competitors that hours earlier were complete strangers. Friendships form. Some lifelong.

At the conclusion of the NHC, one player must emerge victorious. However, each individual participant is cognizant of the gargantuan odds against it actually being them. But it could happen. After all, if anyone in the world understands an upset, it’s members of this group. Longshots win about as often as that kid in the movie sees dead people--All the time! Going in each asks, ‘Why not me?’ ‘Indeed, why not you!’

According to published reports, Chris Littlemore scaled the handicapper’s Everest using only a pen and Daily Racing Form past performances. No sheets, no computer printouts, black boxes, graphs, stats and trends, tea leaves or crystal balls. Amazing! He went ‘Old School’ and emerged victorious. Of course, he had a few edges: First, he hails from Canada--just like last season’s NHC champ Ray Arsenault. Why neighbors to the north suddenly have produced back-to-back NHC champs is anyone’s guess. Maybe all those cold winters cooped-up inside playing the races actually were beneficial? Second, Littlemore’s a former auto parts guy from Canada. Can anyone recall another Canadian-based auto parts guy that made good south of the border?

Over the years, the NHC format has evolved so that everyone doesn’t compete on all three days. The first day winnows the field to 70 players and the second produces a top 10 group that comprises the Final Table. That’s both good and bad news. Obviously, picking winners at decent prices is the goal, especially out of the gate. You ‘gotta be in it to win it. But imagine the aggravation level of being stuck on the sidelines Sunday watching Final Table play while simultaneously cashing tickets on 20-1 winners!

As Day 2 NHC action unfolded Saturday in Vegas, Xpressbet account holders attempted to outscore XBTV.com personality Millie Ball online in Week Six Beat the Host action. She checked in with a total of $22.50 based on $5 win wagers on one horse in each of 8 mandatory races. Ball’s total, and that of most of this season’s hosts, was not insurmountable. Tamara Hecker won the $1,500 weekly top prize with $256 in earnings. Fernando Jose ($234.50) was second and John Veneziano ($222) third. They collect $750 and $250, respectively.

Just two weeks of BTH competition remain, so if you haven’t whipped the host and qualified for the $25,000 Championship Round, you’d better hurry. Santa Anita’s Tom Quigley and Pegasus World Cup Betting Championship winner Eddie Olczyk will host, in that order.

If you’ve ever considered attempting to qualify for the NHC, a great place to begin that journey is with Xpressbet’s Beat the Host competition. It’s fun, affordable and limited to Xpressbet account holders, so you don’t have to beat the world to collect! Register free today and we’ll see you Saturday.