Another 'Two' Bite the Dust on Triple Crown Trail 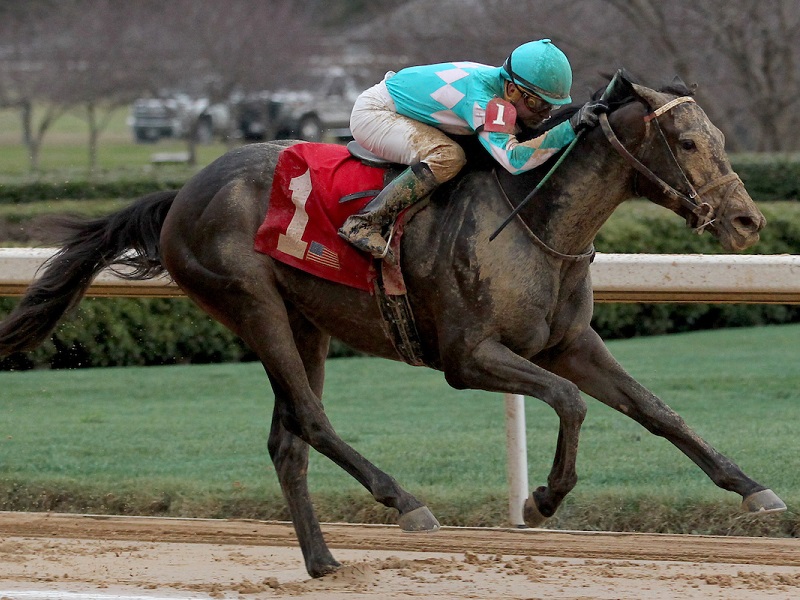 'Another one bites the dust,' is the usual saying. However, this weekend more than 'one' sampled dust or, more appropriately, 'mud.' In a pair of Road to the Kentucky Derby starting gate qualifying point races--Risen Star at Fair Grounds and Southwest at Oaklawn Park--two strong favorites, Instilled Regard at 7/5 and Mourinho at 6/5, failed. What's worse is that they didn't just lose, they were off the board. Out of the money. Trifecta MIA's!

Those results continued a February trend that saw favorites in such races win just 2 of 7 overall.  Avery Island and Paved were the punctual choices but both wins merit asterisks. The former came at around even money against just four rivals in the Withers at Aqueduct. The latter belongs to a filly that's not even on the Derby trail. She won the El Camino Real Derby Saturday at Golden Gate as the slight favorite on a synthetic surface.

That's it. No more Derby prep races in February. Just when the 'fastest-two-minutes-in-sports' picture should be clarifying, it's as murky as the Mississippi bottom.

Kicking things off February 3 in the chase for Kentucky Derby starting gate qualifying points were tarnished favorites Enticed in the Holy Bull at Gulfstream--a 2-1 choice that could only manage fourth behind dominating 3-1 winner Audible--and Shivermetimbers in the Robert B. Lewis at Santa Anita--nowhere as 2-1 favorite behind 9-1 winner Lombo.

A week later, Catholic Boy committed a mortal sin by failing at 70-cents-to-the-dollar in the Sam F. Davis at Tampa Bay Downs. Flameaway delivered the devilish upset at over 10-1.

The rash of vanquished Kentucky Derby prep-race public-choices continued President's Day weekend. Saturday, at Fair Grounds in Louisiana, Bravazo, a 21-1 shot, outlasted Snapper Sinclair, at 41-1 odds, to ignite Risen Star mutuels. Monday, at Oaklawn Park in Arkansas, My Boy Jack rode the rail at nearly 9-1 over a sticky, muddy surface to close for victory over a pair of nearly 5-1 shots--Combatant and Sporting Chance, to upset the Southwest Stakes.

The weekend's most valuable Derby points prep race was the Risen Star and it produced perplexing results. It's not that winner Bravazo--now top dog with 54 Derby qualifying points-- isn't talented. And it's great to have 82-year-old trainer D. Wayne Lukas back in the limelight. But the race raised more questions than provided answers. Off the turn, heavily-favored Instilled Regard loomed menacingly, perfectly positioned to assert his authority under Javier Castellano. He never followed through. On a racetrack that appeared to act as a conveyor belt (hardly any runners altered positions in the race) front-running longshots Bravazo and Snapper Sinclair were propelled to the finish together. Instilled Regard drifted in a bit through the lane and lost third late to Noble Indy. Conveyer belt or not the favorite was a disappointment.

In the Southwest, Mourinho flopped as the 1/5 darling. But that wasn't half the story. When a California invader trained by Baffert fails in Hot Springs it's headline news. Man bites dog! Sun sets in the east! Browns win Super Bowl!

So, Doctor Redboard, what happened to Mourinho in the Southwest?

Glad you asked. The course was compromised. Yes, everyone ran over the same soggy, sticky mess but, as usual, some handled it better than others. Winning rider Kent Desormeaux, one-half of the world-famous 'Galloping Desormeaux Brothers,' described the drying-out surface's consistency as "peanut butter." Jiff, Skippy, chunky or smooth is anyone's guess. No matter. Winner My Boy Jack gobbled it up. Mourinho appeared allergic. He finished fourth.

Closer examination of Mourinho's past performance lines reveals tiny veneer cracks. His maiden triumph was impressive enough, leaving Peace (maiden winner) and eventual Lecomte victor Instilled Regard in his wake. However, second-time out in the Speakeasy going six furlongs at Santa Anita, Mourinho blew a three-length stretch lead to finish second at 30-cents-to-the-dollar! Can you say, 'Red Flag?' Historically, heavily-favored Baffert runners blow three-length stretch leads at Santa Anita about as often as Gulfstream Park races start precisely at post time.  In his third outing, at seven furlongs in the Grade 3 Bob Hope at Santa Anita, Mourinho again disappointed as favorite when second to talented Greyvitos.

Conversely, Southwest victor My Boy Jack has steadily developed. Seven consecutive increased or paired Beyer/Thoro-Graph figures tell the story. That the majority of his races were on turf probably clouded the 'Jack issue for horseplayers, but his last try in the Sham Stakes-third behind consensus highly-ranked soph McKinzie--was on the main and in line with development. Clearly, for him to win the Southwest, he would need to improve again and Mourinho would need to regress. He did and he did.

We haven't seen the top 2017 2-year-olds in the afternoon yet. Chad Brown has champ Good Magic scheduled for a Fountain of Youth start March 3 at Gulfstream, and Mick Ruis has had to maneuver Bolt d'Oro around a training hiccup toward the San Felipe at 'Anita a week later. Baffert headliners McKinzie and Solomini also will be deployed this month, and all eyes will focus on the trainer's most recent ultra-impressive-but-behind-the-8-ball maiden winner Justify, as he attempts to outrace history and the calendar on his way to Churchill Downs.

As my horseplayer friend used to say, "Stay tuned. Things are about to get interestinger."