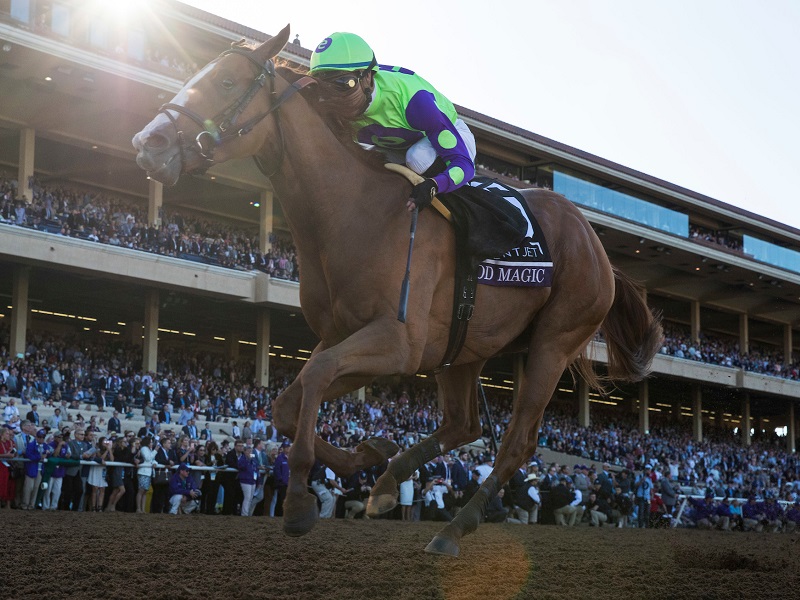 The champ is back.

Good Magic, who was voted a 2017 Eclipse Award as champion 2-year-old male, returns to the racing wars this Saturday in the Grade II Xpressbet Fountain of Youth Stakes at Gulfstream Park. The 1 1/16-mile affair has drawn a field of 10.

Trained by two-time Eclipse Award winner Chad Brown, Good Magic has not appeared under silks since his impressive 4 1/4-length victory in the Grade I Breeders’ Cup Juvenile at 1 1/16 miles last Nov. 4 at Del Mar. The colt made history on that occasion, becoming the first maiden to win that particular Breeders’ Cup race.

Much certainly was expected from Good Magic even before his first career start. The Kentucky-bred son of Curlin races for the partnership of e Five Racing Thoroughbreds (Bob Edwards) and Stonestreet Stables (Barbara Banke). They acquired Good Magic for $1 million at Keeneland as a yearling.

When Good Magic’s racing career was launched at Saratoga last Aug. 26, he ran second as a 3-5 favorite to Hazit in a 6 1/2-furlong maiden special weight affair. Good Magic then finished second when 4-1 to Firenze Fire in Belmont Park’s Grade I Champagne Stakes at one mile on Oct. 7.

After the Champagne, Good Magic was plenty good enough in the BC Juvenile to get his initial win vs. the likes of Solomini and heavy favorite Bolt d’Oro. Bolt d’Oro, sent off at 3-5 following back-to-back Grade I scores in the Del Mar Futurity and Santa Anita’s FrontRunner, raced wide throughout in the 1 1/16-mile BC Juvenile and suffered his first defeat in four lifetime starts.

Good Magic completed his serious preparation for the Fountain of Youth with a sharp four-furlong workout in :48.30 last Saturday at Palm Meadows. He worked by himself, whereas in recent drills he had been working with -- and more than holding his own with -- Economic Model, a 5-year-old. All Economic Model did last Saturday afternoon was to win the Grade III Hal’s Hope at Gulfstream, a performance for which he was assigned a 104 Beyer Speed Figure.

“He’s been working great every week [and] today was more of the same,” Brown said. “The horse seems ready to get back to racing. He’s doing what you want to see 2 to 3. He’s filled out physically some.”

Good Magic is only horse on my current Kentucky Derby Top 10 list entered in the Fountain of Youth. Here is this week’s list:

Fountain of Youth contender Free Drop Billy won the Grade I Breeders’ Futurity by four lengths at Keeneland last Oct. 7. However, he finished ninth, 29 1/4 lengths behind Good Magic, in the BC Juvenile.

Strike Power is two for two going into the Fountain of Youth. The Kentucky-bred Speightstown colt caused a stir when he won a 5 1/2-furlong maiden special weight race in his career debut at 12-1 by eight lengths Dec. 23 at Gulfstream. He then registered a 2 3/4-length triumph in Gulfstream’s Grade III Swale at seven furlongs on Feb. 3.

After Strike Power posted a 102 Beyer Speed Figure in his Dec. 23 debut romp, he recorded an 87 in the Swale. Good Magic’s top Beyer is his 100 in the BC Juvenile. Free Drop Billy’s highest figure is his 90 in the Holy Bull. No one else in the Fountain of Youth has ever recorded a Beyer Speed Figure of 90 or higher.

While Brown has Good Magic ready to go in this Saturday’s Fountain of Youth, what is up with another of the trainer’s 3-year-olds, Mask?

Do you remember Mask? He won Gulfstream’s Mucho Macho Man Stakes by 6 1/4 lengths at one mile on Jan. 6. But on Jan. 30, Daily Racing Form’s Jay Privman reported: “The unbeaten 3-year-old colt Mask, considered a top prospect for the Kentucky Derby, has had a setback ‘that will require him to miss approximately two weeks of training,’ trainer Chad Brown said.”

Added Privman: “Brown said the timing of the setback, details of which he did not want to disclose, would keep Mask out of his next scheduled start, the Grade II, $400,000 Risen Star Stakes at Fair Grounds on Feb. 17.”

Privman broke the news of Mask’s “setback” on Jan. 30. It is Feb. 28. Even though a month has passed, there has been no further news that I have seen regarding Mask. He seems to have completely disappeared. Perhaps he is in an equine witness protection program.

After Justify’s eye-popping 9 1/4-length debut victory in a seven-furlong maiden special weight race Feb. 18 at Santa Anita, he was listed at 300-1 at the Wynn Race Book in Las Vegas on its sheet dated Feb. 19 showing odds to win the May 5 Kentucky Derby.

What? Mask currently is the same 18-1 price as Justify? Really? Considering Mask’s milk-carton status, I can’t blame anyone who would be perfectly willing to book all bets on Mask at 18-1.

As I expected, the travesty continues. Rags to Riches is not one of the 10 finalists appearing on the 2018 Hall of Fame ballot.

Even though she stumbled at the start of the 2007 Belmont Stakes, she became the first filly to win it in 102 years, defeating Curlin by a head in an epic renewal of the 1 1/2-mile classic.

Only three fillies have ever won the Belmont. Ruthless took the inaugural Belmont in 1867. Tanya won it in 1905.

While the Hall of Fame’s Nominating Committee again dropped the ball big-time by not putting historic Belmont Stakes winner Rags to Riches on the 2018 ballot, there is some good news this year regarding the Hall of Fame.

Here at Xpressbet.com in 2007, I wrote: “It’s ridiculous that the finalists must compete against each other for induction. Racing is all about competition. But the competition should take place on the track, not on Hall of Fame ballots.”

Take 2006, for instance. There were no contemporary inductees that year. Zero. Was that because there was not a single horse or single trainer or single jockey who deserved to get into the Hall of Fame that year? No, it was because the format was far too restrictive. In 2006, only one finalist per category (one male horse, one female horse, one jockey and one trainer) was allowed into the Hall of Fame. And in 2006, it also took at least 75% support, which I felt was way too high.

It is my view that a 50.1% threshold this year probably is too low. If you put the “over/under” as to how many of the 10 finalists will be voted into the Hall of Fame this year at five, I am going with the “over.” Actually, I will not be surprised if close to 10 get in. But if that does happen, I do not think it is a bad thing. If, say, six or more of the 10 finalists are deemed by the voters to be worthy of being Hall of Famers, then go ahead and let them in. It is sure a lot better than it was in 2006.

In 2006, after the Hall of Fame announced there would be no contemporary Hall of Fame inductees that year, I wrote this:

“You’re going to tell me not one of those people or horses deserves to be in the Hall of Fame?”

Of the 12 finalists in 2006 who didn’t get in, 10 now are in the Hall of Fame (Maple, Solis, Veitch, Wheeler, Best Pal, Manila, Silver Charm, Inside Information, Silverbulletday and Sky Beauty). Does that give you an indication of just how screwed up the format was in 2006?

The only two 2006 finalists not presently in the Hall of Fame are Perrett and Stute. Perrett is one of this year’s finalists (for the umpteenth time).

I think a compelling case can be made that no one has been more of a victim of the various Hall of Fame formats than Stute. I believe he most likely would be in the Hall of Fame if the format had been more like it is now rather than how it was during the many years he was a finalist.

I have been keeping track of the Hall of Fame finalists since 2000. Consider what Stute was up against from 2001 through 2006. Again, in those years only one trainer could get into the Hall of Fame each year.

In 2001, Stute was a trainer finalist with Richard Mandella and Sonny Hine. Mandella was voted in. The plain truth is Stute had no chance when having to compete against Mandella.

In 2002, Stute was a trainer finalist, as were Bud Delp and Hine. Delp was voted in. Again, Stute had no chance.

In 2003, Stute was a trainer finalist, as were Sonny Hine and Veitch. Hine was voted in.

The three trainer finalists in 2004 were Shug McGaughey, Veitch and Nick Zito. McGaughey was voted in.

In 2005, Stute returned as a trainer finalist. Dale Baird, Gary Jones, Veitch and Zito also were finalists that year. Zito was voted in.

To illustrate how fierce the competition was for Stute in those years to try and snag the one Hall of Fame entry from the trainer category, he appeared on the ballot with seven other trainers from 2001 through 2006. Six of the seven -- Mandella, Delp, Hine, Zito, Veitch and Jones -- ultimately were deemed worthy of Hall of Fame membership.

As for this year’s 10 finalists, I congratulate them. Inasmuch as I consider it to be a particularly strong group this year, it is good for them that now more than one finalist per category can be voted in.

“There is absolutely no reason all 10 could not enter the Hall,” Daily Racing Form’s Jay Hovdey wrote after this year’s finalists were announced. “The rules say it’s okay. The Nominating Committee, by a super majority vote, all but said it’s okay. And, more importantly, the qualifications of the 10 candidates shout from the rooftops, ‘It’s okay!’ ”

While I do think Blind Luck, Havre de Grace and Heavenly Prize certainly are deserving finalists as female horses, I can’t help but feel it is a crime that they are on a ballot that yet again has excluded Rags to Riches.