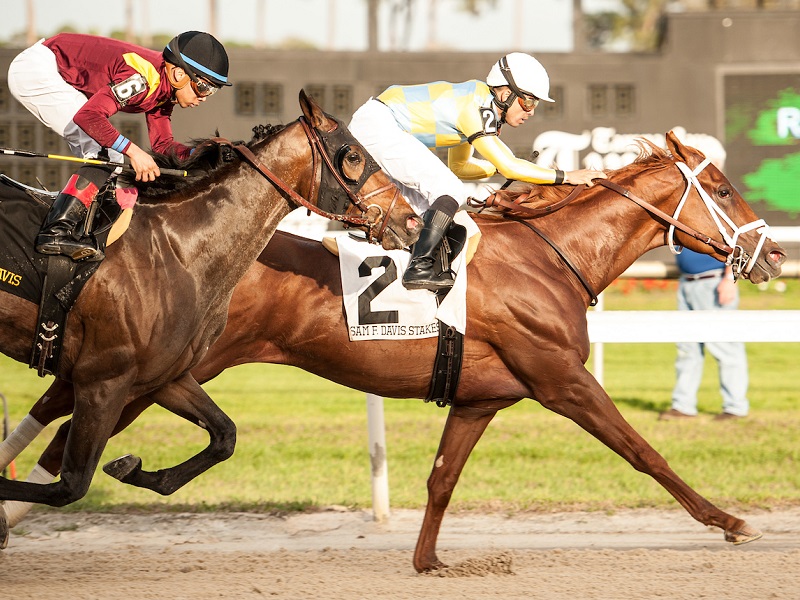 Remember when this year’s Kentucky Derby Trail was easy to predict?  I’ll be honest with you…I hardly do either.  But it was.  I promise.

Between the Los Alamitos Futurity (December 17) and the Smarty Jones Stakes (January 15), favorites won 4-of-6 ‘Road to the Kentucky Derby’ Points races and finished second in the other two.  The average winner paid a little more than $4 and chalk players were thrilled.  Horses like McKinzie, Instilled Regard and Mourinho started to ascend Derby Lists.

But for as calm as December and January were, the last five weeks have been anything but.  In eight Points races since the Smarty Jones, favorites have gone just 2-for-8, with four off-the-board finishes.  Among those beaten at short odds were Good Magic (0.70/1) in the Xpressbet Fountain of Youth, Catholic Boy (0.70/1) and Instilled Regard (1.40/1) in the Risen Star.

And whether or not you’ve decided to ‘check’ or ‘hold’ on those horses is a key determining factor on how you’ll approach Kentucky Derby Future Wager Pool 3, if at all.

This year’s Kentucky Derby Future Wager consists of four separate ‘pools’ held between November 2017 and April 2018.  And common sense would seem to indicate that odds should lower – and come into clearer focus – the closer we get to the First Saturday in May.  For example, you should expect to get better odds on a horse in November than you do in March.

But due to the tumultuous nature of this year’s Derby Trail, that may not be the case this time around, especially with the more precocious horses in the group.

And there are a handful of horses that, if you aren’t giving up on them, may be worth more value now than ever.

There are 13 common horses between Kentucky Derby Future Pool 2 (February 9 – 11) and Pool 3 (March 9 – 11).  Of those common horses, four horses have a higher Morning Line this time around than their final odds in the last pool.

If you still believe in those four horses, now is the time to strike.

Catholic Boy’s defeat in the Sam F. Davis isn’t the end of the world.  Yes, he should’ve gone past Flameaway down the lane, but he was beaten just ½-length in a race that was run in stakes record time.  He’s slated to come back in the Xpressbet Florida Derby on March 31 and if he wins there, there’s no reason to think he wouldn’t be in the 10/1 range on Derby Day.

Good Magic is in a similar position.  He tired noticeably in the Xpressbet Fountain of Youth, but that was his first start in four months and his trainer, Chad Brown, has mapped out his campaign to aim for a peak performance on May 5.  If you think he can get there, 15/1 odds would be a steal.  My colleague, Jeremy Plonk, isn’t as convinced.  He goes next in the Blue Grass at Keeneland, and an impressive win there could put him below 8/1 on Derby Day.

Instilled Regard is probably the biggest red flag of that trio.  His effort in the Risen Star was as dull as it gets and, quite frankly, it shouldn’t have been.  Catholic Boy and Good Magic have earned the benefit of the doubt for their early season struggles.  Their races came off layoffs.  But Instilled Regard has raced every four or five weeks since September and he had just won the Lecomte on January 13 prior to his Risen Star flop on February 17.  In spite of his bullet workout at Santa Anita on March 7 I would still proceed with caution.

So whether you go ‘all in’ with the Futures or generally pass, Pool 3 has the makings of an interesting betting opportunity.