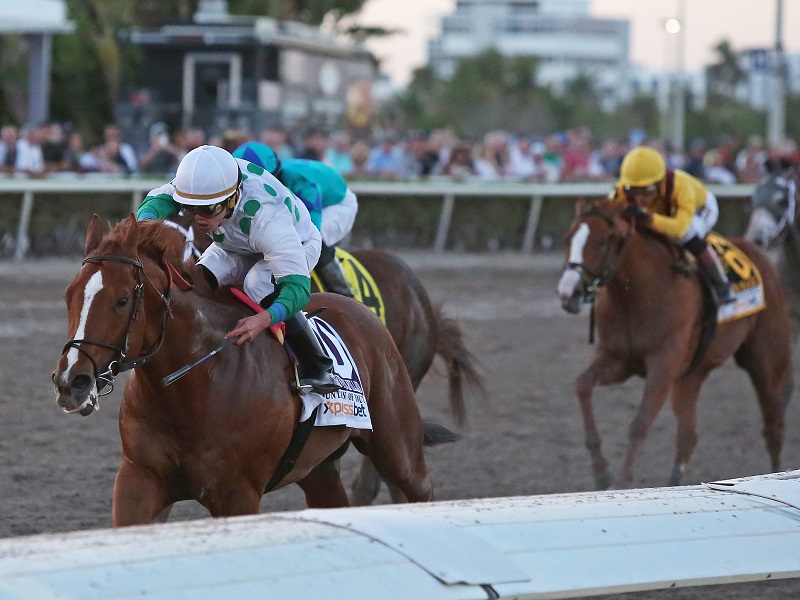 Saturday’s GII Xpressbet Fountain of Youth at Gulfstream Park marked the return of reigning 2yo champion Good Magic, who was sent postward as a legitimate 7/10 favorite and seemingly found a cushy spot to kick off his 3yo campaign. And while his meek 3rd-place finish only enhanced the adage “they still have to run the race,” it also brought to light several questions about not only his future going forward, but about that of the top-2 finishers, Promises Fulfilled and Strike Power as well.

First off, major kudos to Irad Ortiz, who was extremely aggressive aboard Promises Fulfilled from his outside stall and was hell-bent on getting the lead. His Quarter-Horse style early may have caught Luis Saez off-guard, as he conceded the early lead on Strike Power, even though that colt has proven to be extremely fast in his first two lopsided sprint wins to start his career. From there, the Gulfstream merry-go-round was in full flight, as the top-3 essentially ran around the track together. The fractions of 23.80 and 48.30 were extremely modest for the level, and it wasn’t a huge surprise that Promises Fulfilled held sway to the line, even though he was a rightful 18-1.

It’s tough to take too much away from Promises Fulfilled, since, after all, he was making his first start since November and clearly has improved off a solid, if unspectacular, 3rd in the GII Kentucky Jockey Club at Churchill Downs to end his 2yo season. But this run just has the “what happens at Gulfstream stays at Gulfstream” mantra that a lot of races in Hallandale Beach have. And sure, maybe he comes back and wins the Florida Derby and heads to Churchill Downs as a legitimate Kentucky Derby contender, but they aren’t going 48 and change in Louisville, and it’s unlikely they go that slow in the Florida Derby either, so I’d be very willing to make Promises Fulfilled prove it in that one.

I’d make Strike Power prove it even more, and would go so far as to say he’s a total toss to me in the local Derby. I understand he got a lot thrown at him Saturday, in that it was his first start at two turns and first time he didn’t make the front, but the way he had dead aim and couldn’t get by Promises Fulfilled left a very bad taste in my mouth. He also basically stopped on a dime past the wire, which certainly doesn’t give a ringing endorsement for his chances to get another half-furlong in the Florida Derby. And all this comes before even mentioning that he was an unraced maiden in mid-December, and is now (presumably) going right back to the well later this month. I think he’s a tremendously talented individual, and Mark Hennig has done a fine job with him, but he just looks like a potential crack miler, and a fringe two-turn horse, at best, and, maybe more importantly, a horse who is about to hit the wall hard.

As for Good Magic, it’s tough to take anything positive out of his return. Sure, he needed the race, and sure, Chad Brown isn’t going to have him cranked in early March when the first Saturday in May is the main goal, but nothing from this run suggests we’ll be talking about him come Derby Day. I voted Good Magic 2nd in the NTRA poll before this race, and was on record as saying he basically had to win the Fountain of Youth, due in large part to his sizable talent, but also due to the fact that this was an extremely weak renewal of the race. So, to see him essentially be all-in before the far turn and run one-paced to the line doesn’t speak volumes about what you would have thought would have been a bigger, stronger version of the horse who broke his maiden in the Breeders’ Cup Juvenile. It also makes you wonder if 1 ¼ miles is going to be within his scope too. I’d expect him to move forward in his next start, which is likely the GII Blue Grass at Keeneland, but I also know darn well he’ll be 7/5, and that’s the type that you just have to play against.

I can’t possibly see anyone else from the Xpressbet Fountain of Youth making a dent in a meaningful Derby prep going forward, but it’s worth noting that Storm Runner would have been much closer if he hadn’t been shut off inside early on and dropped back, and that the speedy Machismo ran surprisingly well to close from 7th to be 4th, when he was surprisingly taken back off the pedestrian early pace. Also, who am I to question Todd Pletcher’s genius, but not even the wonders he works at Gulfstream could get the plodder Marconi to run any good, in what was an odd spot to try off a trio of 1 1/8-mile races to kick off his career. He seems destined for the allowance ranks by mid-summer, though I’d bet a beer we see him in the Belmont first.