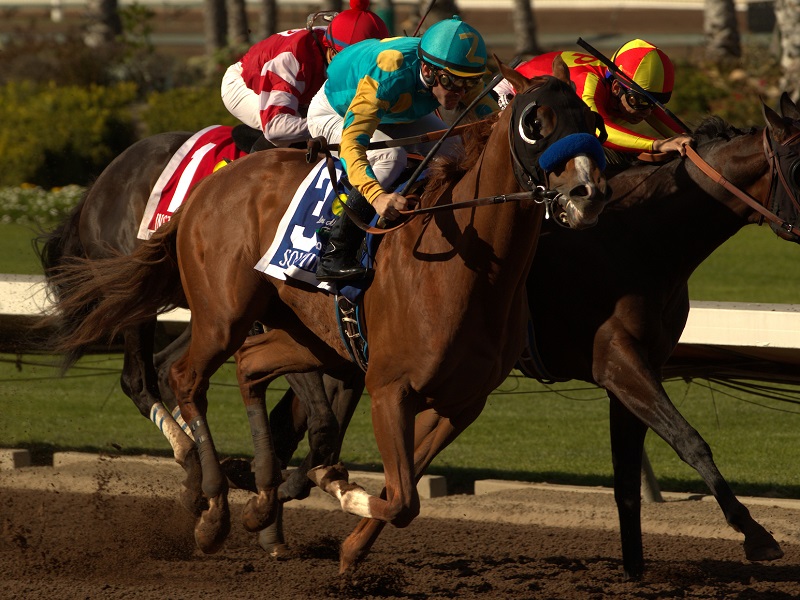 This Triple Crown Prep season, Xpressbet is giving customers a chance to get their Money-Back on key races like the Rebel and Jeff Ruby, plus they can cash in on 0% Takeout offers this Saturday at Oaklawn and Turfway.

85 Kentucky Derby Points are on the line in the G2 Rebel Stakes, and with so many Points up for grabs, a top-quality field of sophomores has been assembled.  Here’s a look at the four most likely winners.

In a few years, they might just want to rename the Rebel the Bob Baffert Stakes.  Why?  Well, Baffert has owned this race.  He’s won six of the last eight editions, including three straight from 2010 – 2012 and again from 2014 – 2016.  His winners in that span include American Pharoah, The Factor, Lookin at Lucky and Hoppertunity.  This year’s entrant, Solomini, spent time last fall chasing Bolt d’Oro in the G1 Breeders’ Cup Juvenile and G1 FrontRunner, and was DQ’d in somewhat controversial fashion in the G1 Los Alamitos Futurity, a race McKinzie ‘won.’

And since McKinzie and Bolt d’Oro just put on a show last weekend in Santa Anita’s G2 San Felipe.  And if Solomini is even ‘nearly’ as good as those horses, he should win this for fun.  And given Baffert’s impeccable record in this race, he’s definitely the horse to beat, despite a 3-month layoff.  His recent workouts, viewable on XBTV, have all been scorching.

Todd Pletcher won this race last year with Malagacy, a lightly-raced horse based in Florida.  Can he do it twice in a row, this year with Magnum Moon?  Magnum Moon was an impressive Gulfstream debut winner for Pletcher, having won his first race by 4 ½-lengths on January 13.  Among the horses he beat that day was Machismo, who broke his maiden next out by over 11-lengths.

Magnum Moon went on to win a first-level allowance race at Tampa on February 15 (at 10-cents on the dollar) and you’ll note that Luis Saez was along for the ride that day, which is a massive vote of confidence from Gulfstream’s leading rider.  It’s not often he passes up a day at Gulfstream to ride elsewhere.  He’s along for the ride once again, which once again bodes well for his chances.

I’ve yet to see Sporting Chance run a race I didn’t like.  He ran well in his debut at Churchill in June, despite starting for a barn that doesn’t currently excel with first-time starters.  And then he set the world ablaze at Saratoga, breaking his maiden by a neck over eventual G1 winner Free Drop Billy.  He’d go on to win the G1 Hopeful (again over Free Drop Billy).  Injury forced him to miss the Breeders’ Cup, but he came back decently last month, finishing 3rd, beaten 7-lengths, in the G3 Southwest.

Sporting Chance’s effort in the Southwest was solid, despite racing around two-turns for the first time on a track that seemed to favor horses racing inside.  It was also the first time Sporting Chance was asked to stalk and race behind horses, which should benefit him in the long run.  Common sense would dictate he should take a step forward off that race and, if he does, he should be in the mix.

Luck hasn’t been on Combatant’s side, having drawn in the 9 or 10 Post in four of six lifetime starts.  That’s rough for a horse that prefers racing midpack.  How do you carve out a good trip in a tough race if you’re forced to race three, four or five wide around the turns?

Combatant got the worst of it last out in the G3 Southwest as he was caught wide and made a huge rally before running out of gas.  The winner that day, My Boy Jack, broke on the inside and scraped the paint en route to a 4 ½-length win.  Switch their trips and you may get a significantly different outcome.   If the pace is quick and if Ricardo Santana can save ground he has the credentials to run better than he did last time at a higher price.

Saturday’s All Stakes Pick 3, which covers Races 8 – 10, falls into Xpressbet’s popular 0% Takeout promotion.  Make a winning bet and we’ll deposit the Takeout back into your account next week.  Here are some thoughts on how to play it.

I’m going four deep to start the sequence, but if DAZZLING GEM (3/1) runs back to his last race (in the mud), they may all be running for second.  My issue with singling DAZZLING GEM is that race was the exception of his career, not the norm.  That performance snapped a six-race losing streak and with just a 4-for-14 career mark, he’s not the type of horse you can count on to win.  For that reason, I’m also adding LEOFRIC (4/1), DALMORE (12/1) and HEDGE FUND (4/1) to my ticket.  LEOFRIC is the ‘hometown’ horse (he’s 4-for-5 locally) and DALMORE just won by 8 ½-lengths at Santa Anita and was purchased privately by Loooch Racing following that race.  HEDGE FUND is an underrated Todd Pletcher runner who just won an allowance at Gulfstream

I’m going three deep in the Azeri, with my top pick being the incredibly versatile MARTINI GLASS (4/1), who has won 9-of-22 lifetime including the G3 Royal Delta last out over Lewis Bay at Gulfstream.  Last year she finished second in the G1 Spinster at Keeneland and in the G1 Delaware Handicap, behind Songbird.  Simply put, she can run.  BLUE PRIZE (7/2) ran like a star in the G2 Fall City Handicap last November by 8 ½-lengths at Churchill, but she’s been away since.  If she comes back atop her game, look out.  Finally, I’ll use ACTRESS (3/1).  I don’t like that she lost the G3 Houston Ladies Classic last out, but she won the G3 Comely and G2 Black-Eyed Susan last year.