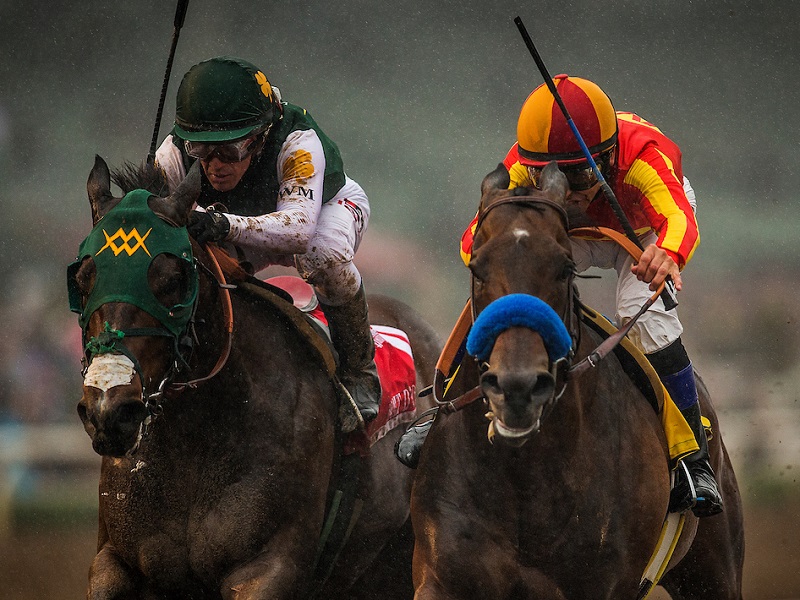 Trainers Bob Baffert and Mick Ruis apparently have set the stage for a Santa Anita Derby rematch between their star 3-year-olds McKinzie and Bolt d’Oro. The 1-2 finishers in the San Felipe Stakes weren’t separated by much on the track…and even less in the steward’s booth in a contested disqualification that put Bolt d’Oro into the winner’s circle.

April 7 marks the date for this year’s Santa Anita Derby rematch if the stars align (literally). It will mark just the eighth rematch of San Felipe 1-2 finishers in California’s premier final prep for the Triple Crown in the past two decades. And in terms of heavyweight rematches, it’s the biggest since Free House and Silver Charm went back after it in 1997.

Are two major clashes like this too much on the trail in this day and age? That’s a fair question. But it’s one we won’t be able to answer until after we see the sequel. Between now and April 7, the question becomes: Which horse do you prefer in the Santa Anita Derby?

Here’s the run-down of San Felipe 1-2 finishers back in a Santa Anita Derby sequel since 1997.

1997 Free House-Silver Charm repeated 1-2 in the Santa Anita Derby and would go on to Kentucky Derby glory as Silver Charm won in Louisville and Free House was a close third.

1998 Artax-Real Quiet were upended in the Santa Anita Derby by Real Quiet’s stablemate Indian Charlie. Artax faltered to third in the SA Derby, with Real Quiet flipping the result in second, a race prior to his upsetting the Kentucky Derby.

2001 Point Given-I Love Silver came right back in the Santa Anita Derby to run 1-3 with Point Given a dominant performer in the Triple Crown series, capturing the Preakness and Belmont.

2003 Buddy Gil-Atswhatimtalknbout returned to run 1-4 in the SA Derby and then added sixth and fourth-place efforts, respectively, on the first Saturday in May.

2015 Dortmund-Prospect Park also saw their margins spread in the SA Derby redux, finishing 1-4, before Dortmund would go on to be third to American Pharoah in Louisville.

2016 Danzing Candy-Mor Spirit was the most recent San Felipe 1-2 rematch, but neither found paydirt in the SA Derby, as Danzing Candy tired to fourth and Mor Spirit repeated his runner-up bid. The SA Derby went to San Felipe third Exaggerator, the eventual Kentucky Derby runner-up and Preakness winner.

So, not only has a San Felipe 1-2 rematch not been a precursor to a Santa Anita Derby bounce, it’s actually been rather productive in Triple Crown races thereafter. Baffert won 2/3 of the Triple Crown with Silver Charm, Real Quiet and Point Given in this situation. It’s also produced Triple Crown placings from Free House, Pioneerof The Nile and Dortmund, and Derby superfecta placings from Came Home and Atswhatimtalkinbout … not to mention an extended invitation from Exaggerator’s Derby/Preakness success via the rare “tri-match” of the San Felipe.

History says this showdown should not knock out both the San Felipe returnees. It also says lean heavily toward the San Felipe winner in the rematch on April 7. Now, if we can only figure out just who that really is after McKinzie hit the wire first, but Bolt d’Oro has been engraved on the San Felipe trophy.

You didn’t think this was going to be that easy, did you?