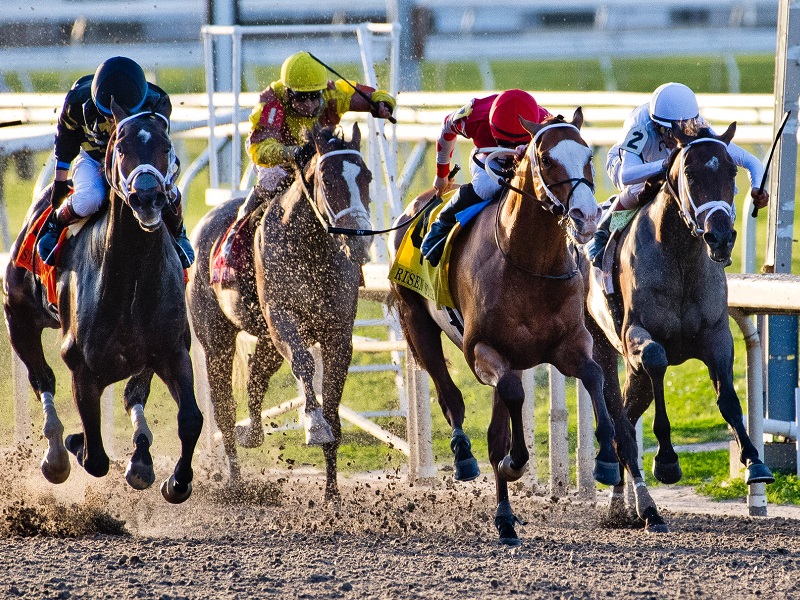 This Saturday’s Louisiana Derby card at the Fair Grounds is truly a marathon.  Fourteen races.  Eight stakes.  Three Pick 4’s.  It’s the kind of card you can get lost in, which makes handicapping in advance a very worthwhile exercise.  After all, handicapping with a ‘plan’ is incredibly valuable and it saves you from wasting too much bankroll on races or horses you don’t have a strong opinion on.

I’ve scoured the card and identified five horses that I think are worth including in your bets.  Some are favorites, but not all of them.  Some are very likely winners – others are a bit more of a reach based on the value they offer.

Plus, at Xpressbet, we’re still running our Money-Back Guarantee and 0% Takeout promotions.  Simply put, they’re one of the best values in racing.  This weekend, you can get your $10 Win bet on the Louisiana Derby (or Sunday’s Sunland Derby) back if your horse finishes 2nd or 3rd.  Plus, if you hit the All-Stakes Pick 3 (Races 9 – 11) Saturday at the Fair Grounds, the takeout is on us!

There aren’t many surface and distance specialists signed on for the Costa Rising, a 5 ½-furlong turf sprint for Louisiana-breds.  And while a lack of ‘horses for course’ isn’t exactly common in a race like this, it makes for somewhat simpler handicapping for me.  Eden Grey’s Kitten has been a little down on his luck lately (he’s lost four straight), but one of those races was on the dirt and two others came against open stakes company.  He’s 4-for-16 at the Fair Grounds, 5-for-16 at the distance and will get a pace to run at.  Look out for him at a big price – 8/1 on the ML.

When I handicap, I’m always on the lookout for horses that I can confidently single and build multi-race bets around.  And in the New Orleans Ladies Stakes, I think I’ve found one such horse in the form of Mom’s On Strike.  She went 3-for-3 over the winter at the Fair Grounds and found a race with enough early speed to set up her late kick.  There’s no reason to believe she can’t win again.  This race is the ‘get out’ leg of the Early Pick 4, so you should consider her as a single.

Statistics play a huge role in my handicapping, and most angles point to Maybe Wicked running a big race in her debut, which comes in Saturday’s 7th race.  She goes out for the Brad Cox barn, which, according to my Racing Form, scores with 29% of first time turf starters, 30% of horses debuting at a mile or longer and strikes at a remarkable 32% rate at the Fair Grounds with Florent Geroux in the saddle.  Plus, her sire, Mizzen Mast, is a respected turf stallion.  Sounds like plenty of positive angles in an otherwise underwhelming maiden race.

The day’s deepest race is probably the Muniz Memorial Handicap, which attracted a loaded field of 11, including Ring Weekend, Revved Up, Forge, Synchrony, Danish Dynaformer and Mr. Misunderstood.  And while none of those would be a surprise (I’d argue Synchrony and Forge are extremely possible), my pick here is a bit of a longshot – Lucullan.  I loved his seasonal debut last month at Gulfstream where he effortlessly closed into a slow pace against a decent field to win by 3-lengths.  He was beaten just a neck in the G3 Hill Prince Stakes last October at Belmont and he’s never been worse than 3rd in five turf tries.  He teams with Hall of Fame rider Gary Stevens for the first time and has plenty of upside.

Talk about a wide-open race!  From top to bottom, you’ve got a field of horses that has successfully overcome the odds (literally) to forge their names near the top of the Triple Crown list.  Bravazo was 21/1 when he nosed out Snapper Sinclair (at odds of 41/1) in the G2 Risen Star, while My Boy Jack was 9/1 when he splashed through the slop to win the G3 Southwest at Oaklawn.  Any of the three could win, but so could Todd Pletcher’s Noble Indy, who adds blinkers and should be part of the early vanguard as well.  The presence of so many speed horses has me looking for a closer and while the most logical of them is My Boy Jack, I’m extremely skeptical of him on a fast track.  He’s 0-for-2 on a fast surface and is a hard sell at 5/2.  What about Dark Templar?  He’s a son of Tapit who goes out for underrated trainer Brendan Walsh.  He has progressed with every start and would love a quick early tempo.  If he gets one, he just may be the right horse at the right price.  I don’t advocate singling him, but you may want to use him in the $200K Guaranteed All-Stakes Pick 4.