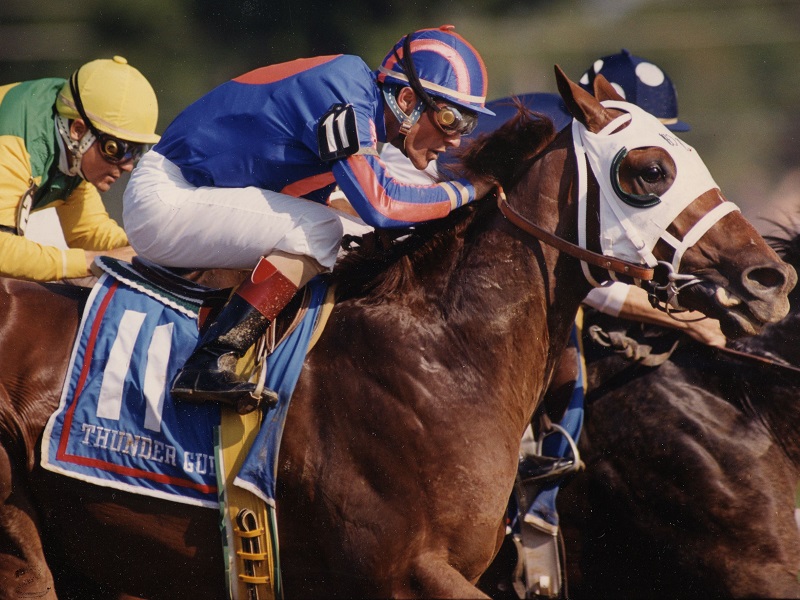 The recent passing of Thunder Gulch sent me scurrying to the bookshelf for a copy of Champions: The Lives, Times, and Past Performances of the 20th Century’s Greatest Thoroughbreds, by editors and writers at Daily Racing Form. The book is a treasure trove of information and includes complete past performance lines of title winners. As I scanned Thunder Gulch’s outstanding career lines from start to finish, I noticed that he won his second lifetime start. That reminded me of something I’ve always believed: Top horses win in either their first or second starts.

They say that one never gets a second chance to make a first impression. And that may be true. However, first impressions in horseracing aren’t quite as critical as they are with humans. Players and fans often will forgive a less than stellar initial voyage, especially if there’s an accompanying trouble line. For example, a tardy start served with a side of ‘bumped’ or ‘stumbled’ can significantly compromise any debut.

Thunder Gulch is such an example. First time out at Belmont Park in September of ’94 at 6.50 – 1 odds, he finished third to Crusader’s Story and Porphyry, a nose and neck better, respectively. ‘Gulch’s comment line reports, ‘Took up, hit rail 1/8 pl.’ Next out at even-money he won by a nose from Porphyry. That ‘Gulch, 3-year-old champion of 1995, took two attempts to win his first race spurred me to delve deeper into the subject.

I used Champions to examine past performances for all 85 US flat racing title holders from the 1990s. Granted, it wasn’t an all-encompassing endeavor designed to provide a definitive answer, but more an opportunity to see if what I had believed for years actually was valid. Thunder Gulch’s passing had launched me down a road I was going to follow for a while…but not all the way to OZ. After all, I’ve got other stuff to do.

My initial reaction was that I finally understood why I had permitted rows and rows of books on shelves to continue to gather dust. Aside from the fact that I’m too lazy to trash them, you just never know when one of those dinosaurs might come to life and roar.  My second thought was the realization that my anecdotal belief that great horses win either first or second time out was solid—well, at least as far as 1990s champions were concerned.

Wanting more information, I dug a bit deeper into the past performances of the exceptions—the 12 ‘90s champions that didn’t win either first or second time out.

Three of the 12 began careers on turf in France. Amazingly, two of those, Cardmania and Lit de Justice, later won Breeders’ Cup Sprint events at six furlongs on dirt! The former for Derek Meredith and the latter for Jenine Sahadi. Coincidentally, both horses also won for the first time going a mile on grass in France—'Mania in his sixth start and ‘Justice in outing lucky number 13. The third member of the group, Possibly Perfect, won maiden in her first US start for Bobby Frankel after three unsuccessful outings en L'hexagone.

Two ‘90s champs that were winless after a pair of initial starts, Pleasant Stage and Pleasant Tap, both won stakes third time out for trainer Chris Speckert and jockey Eddie Delahoussaye. ‘Stage won the Grade 2 Oak Leaf at Santa Anita and then the Grade 1 Breeders’ Cup Juvenile Fillies at Churchill Downs. ‘Tap won the Sunny Slope at Santa Anita.

Three additional ‘90s champions that were winless in two initial starts are Serena’s Song, Skip Away and Timber Country. All lost first out in maiden races, unsuccessfully tried stakes company in second starts and then returned to maiden ranks for victories. A fourth, Canada’s Sky Classic, first tried two stakes and then beat maidens third time out. Queena, trained by Shug McGaughey, also broke maiden in her third try but, unlike other third-time’s-the-charm runners, she didn’t face stakes company before winning.

Tight Spot, an Arlington Million winner for trainer Ron McAnally, was winless in four initial tries before winning at Hollywood Park. His first nine races were on dirt and he won two of those. Moved to turf he triumphed in 10 of his next 12 starts!

Rounding out the list of ‘90’s champions that failed several times before visiting the winner’s circle for the first time are Charismatic and Real Quiet. The former, a 1999 Kentucky Derby hero trained by D. Wayne Lukas, won for a maiden $62,500 tag at Hollywood Park in his sixth start. The latter, a Belmont-nose short of winning the 1998 Triple Crown, won for the first time in his seventh lifetime start, a maiden race at Santa Anita. Before his first win, Real Quiet also was third in a pair of stakes races at Santa Fe Downs.

Perhaps, this journey has bored you. After all, it doesn’t take an ‘Einstein’ to suggest that most great horses win within their first two starts. Duh! Still, I suppose it’s one of those things you always believe, but never actually investigate. Not that this was much of a deep dive —a look at past performance lines for 85 champions from the 1990s. I’d hate to have to hang my hat on such limited data, but it’s enough to support my umbrella.

Ultimately, the exercise, precipitated by the passing of an almost-Triple-Crown-winner from 1995, invited me to visit the accomplishments of top racehorses from nearly two decades ago. As I scanned those past performance lines memories flooded my noggin, rekindling even the smallest details like where I was, who I was with, odors in the air, if I cashed or not.

Now, I’m no Marilu Henner. I can’t tell you last Monday’s date without first consulting a calendar. And I’m no Andy Serling, either. No way I can recall names and details from races decided years ago on the ‘inner’ at Aqueduct. My recollection requires help. Clues. Jogs. Keys to unlock treasure chests containing precious first, second and forever impressions.