Xpressbet Florida Derby Sets Up Much Differently than FOY Stakes 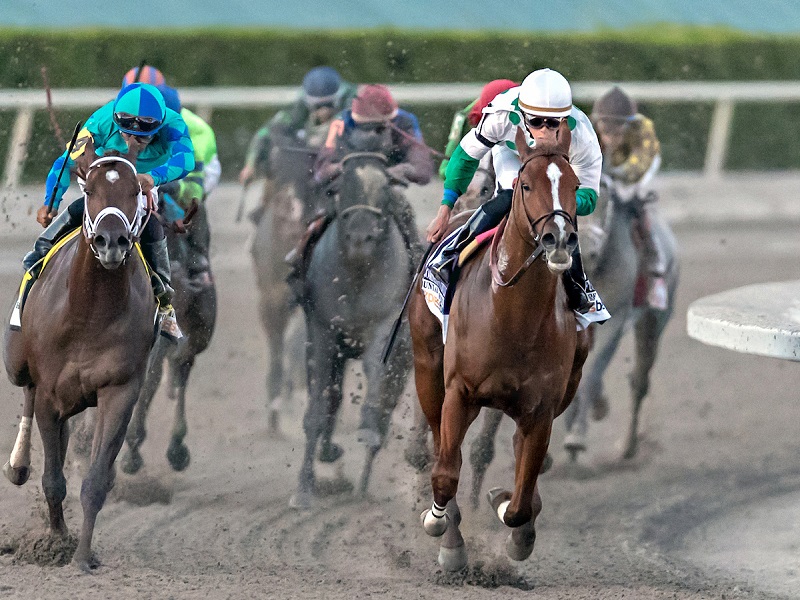 It was just four weeks ago that Promises Fulfilled, under a cagey and aggressive ride from Irad Ortiz, lulled the field to sleep and wired Gulfstream Park’s G2 Xpressbet Fountain of Youth Stakes. That will be fresh in the mind of many a handicapper Saturday, when a field of nine run in their 1 1/8-mile G1 Xpressbet Florida Derby, even though the chances Promises Fulfilled gets loose again are somewhere in the area of the 18-1 he paid in the Fountain of Youth. The hunter may not necessarily be the hunted come Saturday, but the engine figures to be a lot more crowded early on.

The complexion of the Fountain of Youth changed almost immediately, when Ortiz gunned Promises Fulfilled to the lead while somewhat catching Luis Saez, the jockey of the very fleet Strike Power, napping a bit. The former was able to get over to the rail, back things up and basically lead a merry-go-round for 1 1/16 miles. While the fractions of 23.80 48.39 weren’t exactly plow-horse-like over a track that was hardly a lightning strip, they were much slower than expected when you consider Strike Power had set half-mile splits of 45.33 and 45.45 in two lopsided local sprint wins, including the G3 Swale going 7 furlongs. Kudos to Ortiz for potentially catching Saez asleep at the wheel and taking advantage of a track—and first finish line—that has been known to carry a horse home.

Fast forward four weeks and things figure a lot differently in the Xpressbet Florida Derby. Not only is Strike Power drawn down on the rail, his connections have to know that he can’t rate and reel in Promises Fulfilled, especially going an additional half-furlong (and especially the way he looked galloping out after the Xpressbet Fountain of Youth). They also have to know that their horse is decidedly faster early than Promises Fulfilled and can be in front should they choose. Of course, the latter just flexed his muscles on the lead to earn a spot in the Kentucky Derby, so his connections don’t figure to take away the most dangerous asset in racing. Get the picture? Promises Fulfilled breaks from post 4 Saturday, a very advantageous post and one that will allow him to dictate to Strike Power, but regardless, both figure to be going a lot faster early than they did in the Xpressbet Fountain of Youth.

But it doesn’t end there, as the Derby is far from a two-horse field. Actually, the two aforementioned speedsters won’t even be first or second in the betting. That lies with Audible, who figures a solid favorite, and Catholic Boy, who figures a comfortable second-choice. The former actually has the fastest adjusted route fractions in the field and was simply stunning winning the local G2 Holy Bull on February 3, when he was just 2 lengths off a swift 47.14 half-mile. He’s outside Strike Power and Promises Fulfilled in post 8, and with a short run to the first turn, John Velazquez will have to use him a bit early to make sure he secures a good position. Add in the fact he could be a bit keyed up off an eight-week “layoff,” and we could have even more company on or near the front end.

But there’s more, and potentially a lot of it. Mississippi, who has shown a hint of quality in four starts, is in the far outside post (9), dueled with subsequent G2 Louisiana Derby winner Noble Indy through a 47.33 half-mile in a local optional-claimer two-back, and now adds blinkers. So clearly he’s going, to some extent, especially when you factor in the very poor draw and the addition of blinkers, which could have him very amped up early.

Storm Runner is back too. The same Storm Runner who chased a 46.87 half-mile in a local AOC two-back and was right off the early pace in the Fountain of Youth before checking out sharply and losing all chance early on the backstretch. Zillion-to-1 longshot Millionaire Runner is down inside and has shown speed before, and anyone who has seen a horse race before knows there’s seemingly always a 99-1 winging early, even though they have no chance late. The tremendously talented Hofburg is entered too, and he’s got Jose Ortiz, who always errs on the side of aggression, so you would expect he’ll be in the mix during the early proceedings too.

Point being, what was a procession four weeks ago in the Xpressbet Fountain of Youth, looks entirely different four weeks later in the Xpressbet Florida Derby. And while Audible is clearly the horse to beat and wins with ease if he runs back to his Holy Bull score, the connections of Catholic Boy have to be licking their chops, as he’s a proven stalker in a race that figures loaded with speed. Is the workmanlike Catholic Boy good enough to get the better of the more brilliant Audible, while spotting a homecourt edge over a track he’s never been over? That remains to be seen, but the price—and race flow—sure will be right to find out.