Dear Kentucky Derby Superfecta, Where You At? 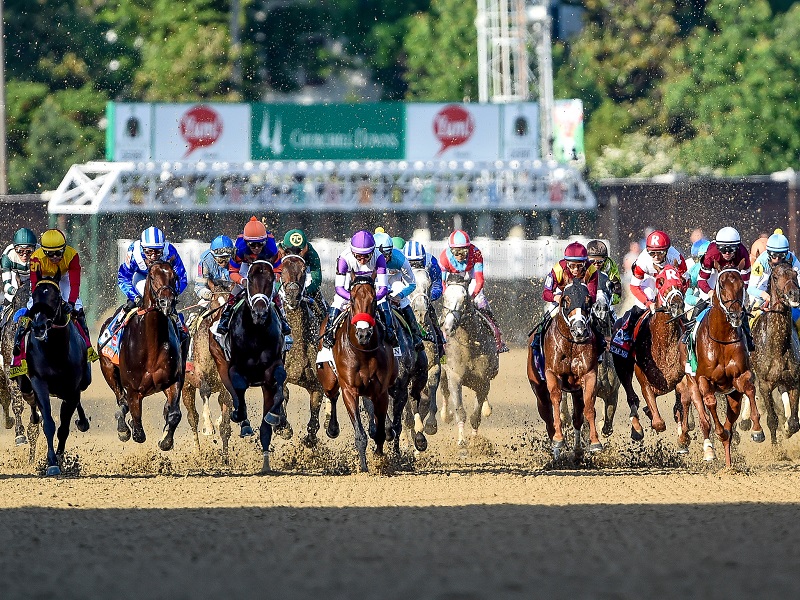 With two Saturdays and just five remaining races on the Road to the Kentucky Derby Presented by Woodford Reserve, there’s not much ‘prep’ time left for the nation’s elite 3-year-olds, or horseplayers. I suppose, at this point, we ought to know the major players. However, the Kentucky Derby offers more than just win, place and show wagering. There are exactas, trifectas, superfectas and, heaven forbid, super high five wagers to be considered. That’s why in advance players ought to attempt to accurately evaluate all possible Derby starters for inclusion or exclusion from tickets. And the sooner, the better.

Last year’s $1 Derby superfacta paid nearly $76,000! For the record, I missed it (no Battle of Midway), but over the years the wager has been good to my friend Will and me. We’ve nailed a few juicy ones by utilizing a caveman approach that involves boxing seven horses for $1 ($840).

For Crist’s sake (Steven, that is), that’s a foolish way to wager! I know. Why give each combination equal weight when some clearly are more likely to hit than others? Makes perfect sense. Still, our clumsy method has worked well--and not just in the Kentucky Derby. We hit the 2011 Belmont Stakes superfecta, too, when Ruler On Ice topped a $1 play that returned $37,026! So, seven years later, we’re still way ahead of the Triple Crown super game and I don’t think we’ll ever alter our wagering strategy. Which just goes to show that there’s more than one way to skin a cat. But why anyone would want Tabby’s pelt I’m not sure.

As the clock on the wall tick-tocks closer toward the first Saturday in May and horse vans exit winter playgrounds of Fair Grounds and Gulfstream to roll north toward Kentucky, now seems an appropriate time to ask, ‘Where you at?’

In other words, what do you think of this year’s sophomore class? Who’s liable to win, place, show or complete the superfecta? While it’s definitely not yet time to break eggs or toss runners, it’s advisable at least to contemplate such matters; to establish general opinions about each runner’s ability to handle a mile and one-quarter in Louisville a month from now. Of course, one must remain flexible, adaptable to additional information right up until around 6:50 pm May 5.

Here’s a quick look at the current top 23 point-earners on the Road to the Kentucky Derby Presented by Woodford Reserve. If the Kentucky Derby were held today, these are the runners that would fill the starting gate. Comments are included and, remember, these opinions are not as much set in stone as they are drawn on an Etch A Sketch

1. Audible - Lazy in the morning, he’s a tiger in the afternoon. The Xpressbet Florida Derby pace favored him, but he won with authority. He’s now dominated in his last four out of five career starts. His obvious talent combined with Florida Derby history—has produced more Derby winners (24) than any other race--make him a legit Kentucky Derby ‘win’ candidate.

2. Noble Indy - Like Audible, he’s trained by Todd Pletcher, last year’s Derby-winning trainer and a man that just might busily saddle four or five starters in this year’s Run for the Roses. The only blemish on Noble Indy’s four-race resume is a third in the Risen Star behind two pacesetters that went one-two around the track. Last out, in the Louisiana Derby, he re-rallied inside to outlast closers Lone Sailor and My Boy Jack for the win—a pair of runners that figure to be in this year’s Derby. We’re not as bullish on ‘Indy as we are on Audible and rank him a slight cut below the absolute best in this class. Exotic possible.

3. Mendelssohn – Brought $3 million as a yearling, won the BC Juvenile Turf and Saturday captured the UAE Derby in Dubai by an incredible 18 lengths. However, the Kentucky Derby is a horse of a different color. Mendelssohn’s jockey Ryan Moore said it best, “He's got a beautiful pedigree, he's got the form, he races forward and there's plenty of experience now. But that's (the Kentucky Derby) a different thing, a hard race with more runners, you can't compare it to today.” We agree and are inclined to make him beat us. However, out of respect for Mendelssohn’s half-sister (Beholder), we’ll keep him around for superfecta consideration, but see many obstacles for him.

4. Bolt d’Oro – Since he first set hoof on a racetrack, he’s been among the best of his generation. Runner-up to Good Magic for 2017 juvenile year-end honors, he traded body blows with McKinzie in the San Felipe at Santa Anita and won the match on a judges’ decision. We’ll see him again Saturday in the Santa Anita Derby against Justify—one of the most exciting 3-year-olds in a long time who has zero Derby points and, therefore, is not even on this list! ‘Bolt’s a ‘win’ candidate.

5. Enticed – He’s slated to appear in the Wood at Aqueduct Saturday. At this point, he’s not quite among our favorites for the Kentucky Derby because he’s been a bit inconsistent. On his best, he fits, but he can’t be counted on to show up.

6. Bravazo – “Draw a line through it.” That’s what Hall of Fame trainer D. Wayne Lukas says to do with this colt’s last race in the Louisiana Derby. If anyone other than D. Wayne advised us to do that, we wouldn’t listen. At all.

7. Promises Fulfilled – Got fried early in the Xpressbet Florida Derby under Robby Albarado when going head-and-head with Strike Power and Luis Saez in what appeared to be some sort of weird hari kari pact. Before that the colt had got away with an easy trip in the Xpressbet Fountain of Youth and that’s not likely to happen in the Kentucky Derby although he figures to try.

8. Magnum Moon – Number three in the Todd Pletcher hit parade convincingly won the Rebel Stakes. He’s headed to the Arkansas Derby next. That race got lengths easier Monday when Justify was chosen to pinch hit for McKinzie in the Santa Anita Derby. ‘Moon’s gotta go to show he’s a legit Derby threat. He’s one of two runners attempting to become the first Derby winner since Apollo in 1882 that did not first race as a 2-year-old. The previously-mentioned-but-absent-from-this-list Justify is the other. At this point, like Justify better.

10. Quip – He won the Tampa Bay Derby and is headed to the Blue Grass Stakes next Saturday. This guy is sneaky good. Replays of his races reveal a hard-trying horse with some speed. He’s won three of four, including a first-out maiden score over the Churchill strip. Keep an eye on this guy for longshot exotic Derby consideration. He’s a reach.

12. Rayya – She’s a filly that finished second in the Dubai World Cup, about an eighth of a mile behind Mendelssohn. She’s reportedly joining the Bob Baffert stable and may be coming to Louisville for the Oaks instead of the Derby.

14. Hofburg – Second in the Xpressbet Florida Derby in just his third lifetime start, he’s got plenty of upside for Hall of Fame trainer Bill Mott. This colt wears the Juddmonte silks and a start in the Kentucky Derby would be rushing things just a bit. However, He’s got plenty of ability and rapidly is learning what it’s all about. If I like Audible (and I do), I gotta give this guy a look at possibly hitting the board in Louisville. It’s a reach, but if Mott goes for it I think I will, too. Keep an eye on this guy. Want to see him train at Churchill.

15. Good Magic – Here’s this season’s forgotten horse. The 2-year-old champ threw in a ‘stinker’ in the Fountain of Youth. He seeks redemption in the Blue Grass Saturday and he’d better show up…or else. He’s clearly the biggest disappointment of the season, although a win in the Blue Grass would immediately rectify the situation. He’s a good horse, but has he developed enough from two to three?

16. Solomini – Switched from the Wood to the Arkansas Derby after McKinzie’s injury, he’ll need to show more than he has lately to regain our confidence. He didn’t change leads in the Rebel Stakes and appears to be a bit difficult to ride. Don’t know that I’d like him in a big Derby field. On the positive side, he didn’t quit in the Rebel lane. Let’s see one more.

17. My Boy Jack – He won in the mud at Oaklawn and then loomed and hung late in the Louisiana Derby at Fair Grounds. Gotta keep him around because he’s experienced (9 starts), his form’s not bad and his late-running style might fit in a field stacked with pace and pressers. Also, it might rain Derby Day.

18. Flameaway – Finished second in the Tampa Bay Derby and is headed to the Blue Grass. Not a fan at this point, but let’s see what he does next.

20. Gronkowski – One of the most dominant football players we’ve ever seen. Equine version…not so much. He gets a slot in the Derby for the same reason the NFL’s Jacksonville gets to play in London each season…international exposure.

21. Free Drop Billy – Was good, then not so good. He’s in the Blue Grass. If he runs really well, we could be talked into putting him on the ticket…maybe.

22. Catholic Boy – Bled badly in the Xpressbet Florida Derby. Will be given plenty of recovery time. Out of the Derby.

23. Snapper Sinclair – Figures to add some pace to the Louisville race. Not quite for us at this point.

Enjoy this weekend’s racing and, if you’ve got the bread, make sure to play Xpressbet’s Showdown! There’s a $300 registration fee and a single, live $20 win wager is required on one horse in each of 10 competition races. That’s a $500 total outlay, but remember that competition wagers are live, so you keep what you win. Pick a few winners and you’re even or ahead for the day. There’s a top prize of $20k and the field is limited to Xpressbet account holders only, so you don’t have to beat the world to collect! 60 players already have qualified for Showdown via Beat the Host and Live. Join them and take a legit shot at the pot!