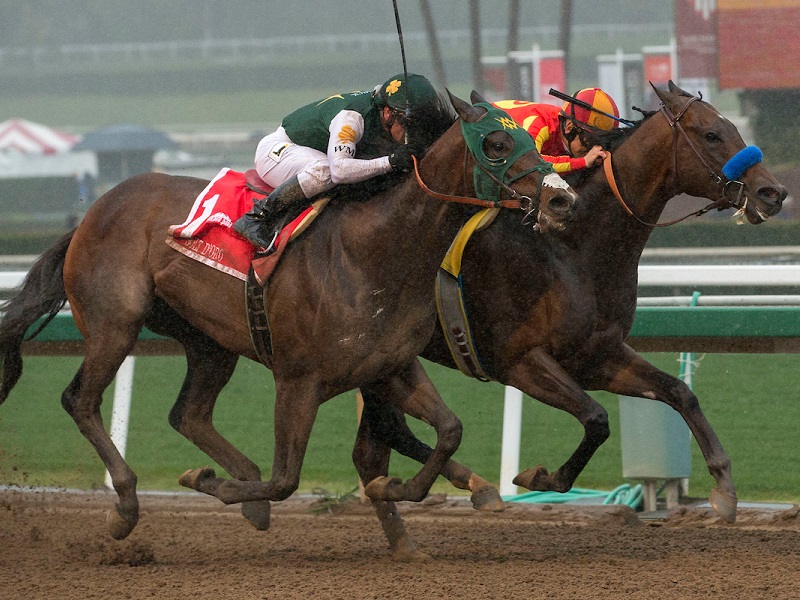 Huge races and great betting opportunities at Santa Anita, Keeneland and Aqueduct make this Saturday a massive day for handicappers.  Here are my answers to five of the burning questions bettors are asking themselves.

1. Who has the edge in the Bolt d’Oro vs Justify Showdown?

Who has the edge?  Yikes!  This is like a beauty contest between identical twins.  They both have an edge!

Bolt d’Oro has the experience, but he’s also such a gritty, determined horse.  You just watch this horse race and it’s clear nothing fazes him.  If he needs to close, he can close.  If he needs to run near the front, he’ll do that too.  Lock him in a battle and he’ll fight you.  Remember that he broke from the rail in the San Felipe and ran behind horses until Javier Castellano tipped him outside of McKinzie.  Not every horse wants to take dirt, but clearly Bolt d’Oro can do it.

Justify, on the other hand, has so much raw talent.  His way of moving is just so impressive and he makes racing look completely effortless.  The fractions from his two-turn allowance debut on March 11 were quick (:22 2/5, :45, 1:09 3/5) and he still drew off like a pro when it mattered.  Obviously, he’s far behind Bolt d’Oro in terms of experience (two career starts to Bolt d’Oro’s five), but based on talent, he may get the nod.

I think Justify ‘won’ the draw in that he’s outside of Bolt d’Oro in an otherwise paceless race (although I expect Core Beliefs to get involved from the outside).  That puts Javier Castellano in the unenviable position of deciding whether to gun Bolt d’Oro to the front, knowing Mike Smith will likely move to sit just off his flank – or – Castellano takes Bolt d’Oro back and risks Justify getting cozy up front and just running them off their feet.

So what happens?  If I had to pick, I think Justify wins the Santa Anita Derby.  My guess is that Castellano uses Bolt d’Oro’s speed to put him on or near the lead and Justify sits the dream trip outside of him.  And when the real running starts, I’ll give the slight nod to Justify with the ‘right’ trip.

And remember, Derby Points are more at a premium for Justify, who HAS to finish 1st or 2nd here to make a trip to Louisville.  Bolt d’Oro, by virtue of his San Felipe win, is already ‘in’ the Derby.  He’s got 64 Points.  Not saying he won’t be cranked, but his connections have had the benefit of circling May 5 on their calendar and working backward with a safety net.

Good Magic should win the Blue Grass Stakes with ease.  But he won’t win the Blue Grass Stakes with ease.  If he does win it, I’ll be surprised if it’s a blowout.  Why?  Personally, at this point, I don’t see how Good Magic isn’t overrated.  Look, I get it.  He won the G1 Breeders’ Cup Juvenile.  But isn’t the Breeders’ Cup the anomaly right now?  How excited am I supposed to get for a horse that’s 1-for-4 lifetime and has lost to Promises Fulfilled, Strike Power, Firenze Fire and Hazit?

My top pick in the Blue Grass is Kanthaka.  He ran into McKinzie and Bolt d’Oro last out and couldn’t run them down, but I’m not sure any 3YO in this crop could’ve that day.  And I’d argue that race – beaten 6 ½-lengths by McKinzie – was better than Good Magic’s seasonal debut – also a 3rd, but beaten 4 ½-lengths by Promises Fulfilled.  Kanthaka should get some pace to shoot at (Sporting Chance, Flameaway, Quip, Machismo) and with great Keeneland rider, Julien Leparoux, in the irons, I think he’s going to run a very big race.

The Blue Grass Stakes is also part of our Money-Back Guarantee promotion!  Place a Win bet up to $10 on a horse in the Blue Grass and we’ll refund your bet if they finish 2nd or 3rd.

And remember, Saturday’s Santa Anita Late Pick 4 is part of our 0% Takeout promotion!  Place a winning wager and we’ll deposit the amount you paid on takeout back into your account next week.

4. Who gets the Kentucky Derby Points in the Wood Memorial?

Kentucky Derby Points are at a premium this time of the year, and 170 of them (100 for 1st, 40 for 2nd, 20 for 3rd and 10 for 4th) are on the line in Aqueduct’s G2 Wood Memorial.  In the past, around 30-35 Points was needed to get into the ‘Run for the Roses.’  But remember, Europe’s Gronkowski has already won an automatic berth into the race by way of the European Road to the Kentucky Derby, which takes a spot away from a local runner.

Enticed (63 Points), by virtue of his win in the G3 Gotham, is already in the Derby field.  Firenze Fire (29 Points) is on the cusp, along with Old Time Revival (20 Points).  But horses like Vino Rosso (7 Points), Restoring Hope (none), King Zachary (none) and Evaluator (none), all of whom could be good enough to run in the ‘Derby, need plenty of help.

I think Enticed is simply the best horse in the Wood Memorial, and I think he’ll walk away with Points.  Restoring Hope has done enough to entice Flavien Prat to leave Santa Anita on arguably its biggest Saturday of the meet to come to New York and ride, and I think that’s plenty of reason to put this progressive son of Giant’s Causeway on a plane to Louisville next.  King Zachary is probably ‘too little too late,’ but I think he can get Points here, while Firenze Fire may do just enough to earn his trip.

So, that’s my guess – Enticed and Restoring Hope get the ‘free passes’ from the Wood by virtue of finishing in the Top 2 and Firenze Fire squeaks into the equation, assuming his connections want to go.  I’m not sold on his chances in route races.

The Wood Memorial is also part of our Money-Back Guarantee promotion!  Place a Win bet up to $10 on a horse in the Wood Memorial and we’ll refund your bet if they finish 2nd or 3rd.

5. Who else am I watching this weekend?

Here are five other horses I think are poised to run well in stakes races this weekend: