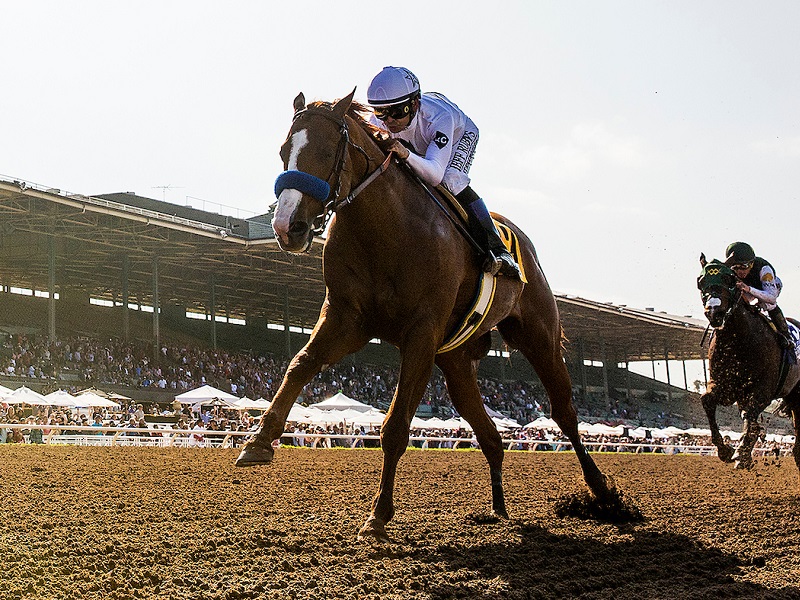 Whether or not Justify wins the Kentucky Derby to become the first horse since Apollo in 1882 to do so without having raced as a 2-year-old, what he already has accomplished is extraordinary.

In the span of just 48 days, Justify went from being an unraced maiden to a Grade I winner in last Saturday’s Grade I Santa Anita Derby. His meteoric rise to stardom began in a seven-furlong maiden race at Santa Anita Park on Feb. 18. I made him the 6-5 morning-line favorite. The bettors pounded him down to 1-2 favoritism.

During track announcer Michael Wrona’s stretch call of that Feb. 18 maiden race, he said: “Less than three-sixteenths to go and it’s Justify by three or four lengths. Camby, under heavy pressure, can do only as well as second placing behind a very promising type. Justify will justify his odds-on quote with the promise of bigger things to come.”

Wrona was both accurate and prophetic.

Justify next appeared under silks in a one-mile allowance/optional claiming race at Santa Anita on March 11. I made him a heavy 2-5 morning-line favorite. The bettors hammered him down to even heavier favoritism at 1-20.

Wrona’s stretch call: “They swing for home and it’s Justify by four, Shivermetimbers second, Calexeman on the inside is next. Justify coming past the eighth pole would have to race in outer space to feel less pressure. He’s not yet battle-hardened, but just who is the most talented 3-year-old to race this weekend? Justify, a colt of limitless potential, wins by six lengths from Shivermetimbers.”

Wrona’s comment as to just who was the most talented 3-year-old to race that weekend was in reference to the Grade II San Felipe Stakes the day before in which McKinzie and Bolt d’Oro had put on quite a show. At the end of a furious stretch battle, McKinzie finished first by a head, but was disqualified and placed second by the stewards for fouling Bolt d’Oro in deep stretch. Bolt d’Oro was elevated to first.

The Santa Anita Derby originally was to have been a rematch between Bolt d’Oro and McKinzie. But McKinzie missed this race and will be absent from participation in any of the Triple Crown events due to what his trainer, Hall of Famer Bob Baffert, reported to be a minor hock injury. McKinzie’s setback prompted Baffert to run Justify in the Santa Anita Derby instead of this Saturday’s Grade I Arkansas Derby at Oaklawn Park.

I installed Justify as the 4-5 morning-line favorite for the Santa Anita Derby. There evidently were those surprised that I did so inasmuch as he had run in only two races. Even Baffert expressed his opinion about this.

“I can’t believe Jon White made him the favorite. He’s letting his emotions get to him,” Baffert said on the Lousville radio program Inside Churchill Downs.

In the Los Angeles Times, Baffert was quoted by John Cherwa as saying about the Santa Anita Derby morning line: “I don’t see making my horse 4-5. He’s only had two races.”

Whether to make Justify or Bolt d’Oro the morning-line favorite was a very difficult decision for me. I gave it considerable thought for several days. But I felt there were a couple of big clues that Justify would be the favorite and quite likely odds-on.

On March 11, the day after the San Felipe, Justify was backed down to 6-1 favoritism in the Kentucky Derby Future Wager when it closed. Bolt d’Oro was 7-1. And last Wednesday, when post positions were drawn for the Santa Anita Derby, Justify was the 6-1 Kentucky Derby favorite at the Wynn Race Book in Las Vegas, with Audible and Bolt d’Oro the co-second choices at 8-1. The odds in the Kentucky Derby Future Wager and at the Wynn carried a lot of weight with me because people were actually betting money, as opposed to the odds being merely a person’s opinion.

Nevertheless, as I stated in the Los Angeles Times’ newsletter “Racing!” last Friday, it would not have surprised me if Bolt d’Oro had been bet to Santa Anita Derby favoritism. I made him a close second choice on the morning line at 6-5.

As it turned out, Justify was indeed sent away as the Santa Anita Derby favorite at 4-5, with Bolt d’Oro the second choice at even money. Hall of Famer Mike Smith rode Justify. Fellow Hall of Famer Javier Castellano was aboard Bolt d’Oro.

With Justify leading Bolt d’Oro by a little more than a length on the far turn, this was Wrona’s race call during the final stages of the race: “Around the far turn in the Santa Anita Derby, as prodigious talent matches established class, it’s Justify by a length and a quarter. Bolt d’Oro taking a run at him, but really having to be pushed on by Castellano. Smith looks confident on Justify reaching the top of the stretch. Back in third is Core Beliefs, then Instilled Regard, Pepe Tono. Justify leading past the eighth pole. He’s a couple of lengths in front. Bolt d’Oro is closing on the inside. It’s Justify by three-quarters of a length. Bolt d’Oro trying ever so hard. But Justify, another exhilarating exhibition by the supremely gifted athlete! He’s on a dizzying ascent to greatness, winning the Santa Anita Derby clearly from Bolt d’Oro, followed in by Core Beliefs and Instilled Regard.”

Bolt d’Oro took not one, but two runs at Justify in the final three furlongs. For Justify, in just his third lifetime start, to turn back two serious challenges by the more seasoned, more battle-tested and classy Bolt d’Oro is further proof that Justify is super special.

In the gallop-out after the finish, I thought Bolt d’Oro might again gain on Justify. But the opposite occurred. Justify galloped out with gusto, opening up on Bolt d’Oro while they were making their way to the clubhouse turn.

Monday morning on Steve Byk’s radio show At the Races, Baffert said of Justify’s Santa Anita Derby victory: “He won that on just sheer, raw talent. He’s just a phenomenal talent. This horse just has so many gears. It’s an honor to train a horse that’s so talented…We knew from Day One that he was something special. He was showing me things like [American] Pharoah and Arrogate. It’s very rare to get those kind of horses…I just can’t believe I’ve had American Pharoah, Arrogate and then Justify, three of the best horses I’ve ever had. It’s just unbelievable.”

You know what’s really scary? Baffert and Smith both have expressed the view that Justify is still learning and that there is room for further improvement. This is very bad news for those who will be trying to beat the grand-looking Kentucky-bred Scat Daddy colt on May 5 in the Kentucky Derby at 1 1/4 miles.

Justify’s Santa Anita Derby triumph solidified his position atop my weekly Kentucky Derby Top 10 list. He had supplanted McKinzie at the top of the list last week.

A NEW LEADER IN THE BEYER DEPARTMENT

Justify’s Beyer Speed Figure for his Santa Anita Derby performance was 107. It’s the highest among the prospective starters in this year’s Kentucky Derby, surpassing Mendelssohn’s 106 for his 18 1/2-length win in the UAE Derby at 1 3/16 miles at Meydan in Dubai on March 31.

Here is the list of all triple-digit Beyers ever recorded by prospective Kentucky Derby starters:

It will be interesting to see what kind of figure Justify runs in the Kentucky Derby. Can he keep the streak going and make it four triple-digit Beyer Speed Figures in as many career starts? If he does, will it be good enough to win the Kentucky Derby in what appears to be an especially strong class of 3-year-old males this year?

Justify’s 107 in the Santa Anita Derby is tied for the highest in this race since Brother Derek recorded a 108 in 2006. Who was the only other horse since Brother Derek to win the Santa Anita Derby with a Beyer as high as 107? It was California Chrome, who in 2014 did go on to capture the Kentucky Derby and Preakness Stakes before his bid for Triple Crown glory was thwarted when he finished in a dead heat for fourth in the Belmont Stakes.

According to the American Racing Manual, these are the Beyer Speed Figures for the winner of the Santa Anita Derby going back to 1990:

WILL THE LONG APOLLO STREAK END?

Since Apollo in 1882, 135 straight Kentucky Derby winners have raced as a 2-year-old.

“But this long streak appears to be in serious jeopardy this year, thanks to a pair of seriously talented colts, Justify and Magnum Moon,” I wrote here in my Xpressbet.com column on March 21.

Not surprisingly, Justify was the favorite in Pool Four of the Kentucky Derby Future Wager (KDFW) that closed last Sunday. He was 3-1. This was the final KDFW pool for the 2018 Kentucky Derby.

Here were the final odds for Pool Four of the KDFW:

History shows that the Derby Strikes System that I developed years ago has merit. Only one horse in the last 45 years has won the Kentucky Derby with more than two strikes. That was Mine that Bird, who had four strikes.

My Derby Strikes system consists of nine key factors that attempt to ascertain the chances a horse has to win the Kentucky Derby from both tactical and historical perspectives. When a horse does not qualify in one of the nine categories, the horse gets a strike. The nine key factors are explained at the end of this column.

Extraordinary talent enables an athlete to do extraordinary things. I cite Bo Jackson as an example. I once saw Jackson do something extraordinary as a baseball player in the 1980s when he was with the Kansas City Royals. The Royals were playing the California (now Los Angeles) Angels. I was sitting behind home plate when Jackson hit a home run unlike any other I’ve ever seen in person or on television. It was a line drive that was hit so hard it managed to go over the outfield fence despite hardly ever getting any higher than the fence.

Horse racing is no different than any other sport. Extraordinary talent enables an equine athlete to do extraordinary things, perhaps even become the first horse since 1882 to win the Kentucky Derby without having raced as a 2-year-old.

In terms of the Derby Strikes Systems, it’s not until a horse’s next race will be the Kentucky Derby that a horse’s number of strikes can be determined. These are the strikes for the 20 leading Kentucky Derby point earners as listed by Churchill Downs when the leaderboard was updated on April 7, plus Gronkowski, who gets a spot in the field for having the most points in the European Road to the Kentucky Derby:

TO BE DETERMINED
Magnum Moon
My Boy Jack
Quip
Solomini