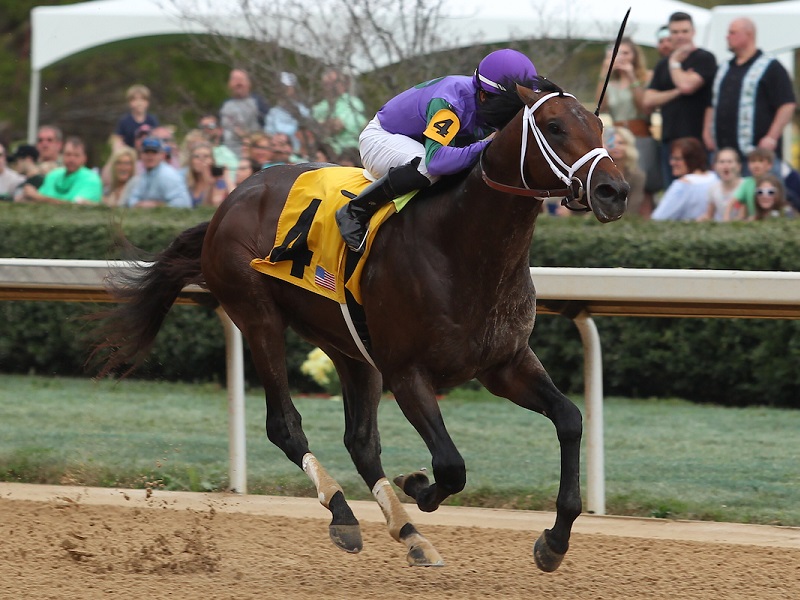 The card also features the G2 Oaklawn Handicap and a pair of California G1 winners – Accelerate and City of Light – is in town to run against a strong local contingent.  And star sprinter, Whitmore, continues his 2018 campaign in the G3 Count Fleet.  Catch all of the action live on XBTV.  First post is 1:30PM ET.

At Keeneland, the top fillies take center stage in the G1 Jenny Wiley and the ungraded Giant’s Causeway.  The Jenny Wiley is loaded with talent, including Dona Bruja, Off Limits, Cambodia, Sistercharlie, La Coronel, Kitten’s Roar and Fourstar Crook.  All are either G1 winners or G1 placed.  Plus, all-word turf sprinter, Lady Aurelia, is back in the Giant’s Causeway and the way Wesley Ward’s horses are running at Keeneland, she’s going to nearly impossible to beat.

I hate for my first pick at Oaklawn to be the chalk, but it’s hard for me to find reason to stand against TITLE READY (3/2) in this one.  He last raced against the likes of Magnum Moon and Solomini in the G2 Rebel and he was only beaten 5-lengths that day, a far superior performance to anyone else in this group.  The other two horses stopping back from the Rebel, HIGH NORTH (7/2) and HIGHER POWER (8/1) were 7th and 8th that day, respectively.   Asmussen’s ‘other’ horse, EGO TRIP (8/1) may pose the biggest threat.  He broke his maiden here last out going 1 1/8-miles, but will be trying to close from far back.

One of last year’s top sprinters, WHITMORE (7/5), is back and ready for more.  I was awfully impressed with the way he stayed in form throughout 2017 (his poor performance in the Breeders’ Cup not withstanding) and Oaklawn is ‘home’ for this horse.  He’s 5-for-8 locally and he won this race in 2017 by 3 ¾-lengths.  I’ll use him and SMART SPREE in my Pick 4.  SMART SPREE (3/1) is the speed of the speed and it’s hard to believe that this horse was running for a tag all year at Woodbine.  He’s 3-for-3 during the meet at Oaklawn and would be very dangerous if left alone on the lead.

The Pick 4 gets a lot deeper in the Oaklawn Handicap, where as many as six horses appears logical.  I’m calling for a quick pace, as G1 winning sprinter, CITY OF LIGHT (3/1), ships in from California and breaks from the 11-post.  He’ll need to break running.  Just to his inside, ACCELERATE (9/5), fresh off a win in the G1 Big Cap, will also look to save ground from an outside post.  They may both send.  We already know Todd Pletcher’s HEDGE FUND (4/1) also wants the lead, which could lead to an all out stampede into the turn.  If that’s the case, make sure HAWAAKOM (10/1) is on your ticket, along with UNTRAPPED (10/1) and MALIBU MAX (20/1), who is the local ‘now’ horse.  All will be closing fast.  And yea, I know a bunch of horses in the Pick 4 isn’t ideal, but I’m paring down all of the other legs, so we should be alright.

To say I like MAGNUM MOON (8/5) in here is an understatement.  I actually LOVE this horse today.  He’s got the perfect post, a great jockey and an ideal running style.  What more could you ask for?  He turned the G2 Rebel into a runaway, blasting SOLOMINI (2/1) and COMBATANT (6/1) by 3+ lengths and he’s still getting better.  My only real concern is the unknown factor in QUIP (9/2).  He scratched out of the G2 Blue Grass last Saturday to run here and he took the G2 Tampa Bay Derby by a length over Flameaway on March 10.  Flameaway came back to run an OK-to-good second behind Good Magic in the Blue Grass and could be the controlling speed, depending on how Flavien Prat rides SOLOMINI.  By the way, that particular horse is a hard toss for me on the win end.  Every race he runs is about the same and I just think he if had any ‘more forward’ in him, we’d have seen it already.

Plus, Xpressbet customers are in for a treat this weekend.  Both the Arkansas Derby (Oaklawn Park, Race 11) and the Lexington Stakes (Keeneland, Race 9) are part of our ‘Money-Back Guarantee’ promotion.  Bet a horse in either race and get your money back, up to $10, if they finish 2nd or 3rd.

And on top of that, Xpressbet will also cover the takeout on two bets this weekend.  At Oaklawn, play the Late Daily Double (Races 11 – 12) to get 0% Takeout and the offer is the same on Exactas in the Lexington at Keeneland, which attracted a field of 12, headlined by My Boy Jack, Greyvitos and Telekinesis.