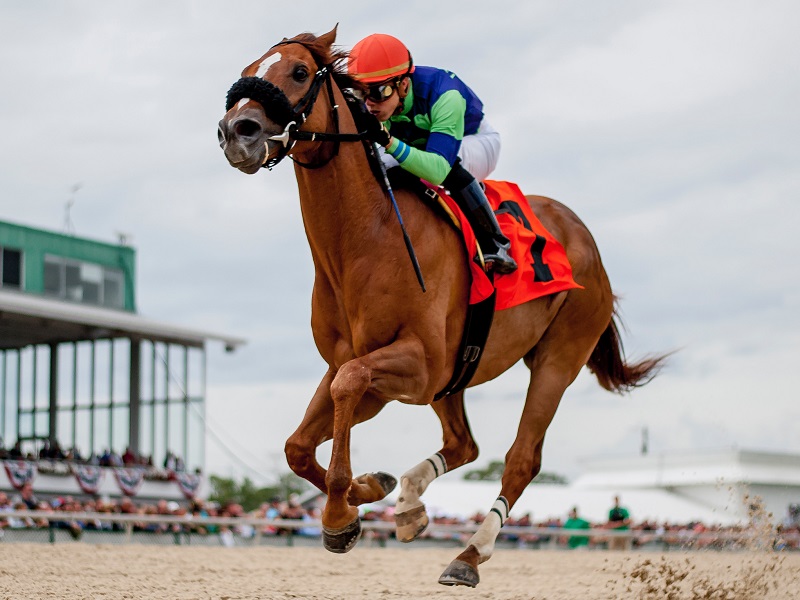 Saturday is a huge day of racing in the Mid-Atlantic, with both Laurel Park and Charles Town putting their best foot forward with cards loaded with stakes races.

At Laurel, the Xpressbet Fountain of Youth Stakes, a ‘Win and You’re In’ event for the Preakness, takes center stage.  As a bettor and racing fan, it’s tough to not get a little excited for the race.  This is the best ‘Tesio field in years, headlined by recent stakes winner, Noble Commander.  Plus, anytime you get Julien Leparoux, Paco Lopez and Junior Alvarado in to ride, you’re doing something very right.

Navigating these two marathon cards (24 races between the two tracks) won’t be easy, so here are some thoughts and horses to key your wagers on.

Betting Against the Favorite in the Charles Town Classic

In the brief history of the Charles Town Classic, post-time favorites are just 1-for-9.  That’s a pretty low mark, especially considering the list of beaten favorites includes Game On Dude, Shared Belief, Commentator and Stanford.

This year’s ML favorite is Diversity, a five-year-old NY-bred son of Bellamy Road who was last seen at Churchill Downs in November, where he finished 4th in the G1 Clark.  Prior to that, he won the G1 Jockey Club Gold Cup at Belmont and his regular rider, Irad Ortiz Jr., will be in the irons.  This is an incredibly tough race for a comeback, especially since he’s never run around a track this short before.  He’s not getting my money at 8/5 odds.

My pick is War Story, who goes out for Imaginary Stables and Glenn Ellis.  He finished a close third in this race last year, beaten just ½-length, and I loved his race in the Challenger Stakes at Tampa last month.  He’s a gritty horse that will grind you into submission and he seems to have the most upside.

I think the All-Stakes Pick 4 at Charles Town can be taken down with a relatively modest ticket.  Here’s how I’m playing:

Who’s the Best Bet in the Xpressbet Federico Tesio?

This may be the deepest race of the weekend, with 11 three-year-olds squaring off in this Preakness Stakes ‘Win and You’re In’ event.  Here’s a quick rundown of the field, and my off-the-cuff thoughts on each horse.

#1 Takedown (Gaudet/Quinones) – 20/1 – Wheels back quickly after winning a first level allowance on April 2.  The fact that Luis Garcia, who rode that day, opted for this barn’s other horse in here indicates how he feels about Takedown’s chances.  Not good.

#2 Still Having Fun (Keefe/Russell) – 5/2 – He ran shockingly bad last time out, finishing off the board as the 3/5 favorite in the Private Terms here on March 17.  His speed figures in his prior two starts were fast – like fringe KY Derby contender fast – but you have to wonder if he was just beating up on a bad winter crop of horses in Maryland.

#4 Noble Commander (Casse/Leparoux) – 6/1 – Anytime you get Julien Leparoux to skip a Saturday at Keeneland to ride in Maryland, you’re probably on to something.  He has been no secret in either of his races in Florida (9/10 odds breaking his maiden and even-money taking the Sophomore Stakes at Tampa) and you have to think this barn has high hopes for him.  I’m not in love with the pedigree, but Lepoaroux making the trip is a huge vote of confidence.  He’s my pick.

#5 Split Verdict (Violette/Carmouche) – 10/1 – He broke his maiden in start number two, but not sure there’s a lot to go off.  This is a big step in class and he’ll need to improve a bit to run with these type of horses.  Might be a better candidate later in the year.

#6 Diamond King (Servis/Pennington) – 4/1 – Loved his gritty run in the G3 Swale at Gulfstream when beaten 3 ¾-lengths by Strike Power.  Hard to find fault with a loss to that one, who is a buzzsaw sprinter.  No clue if this one wants to route, but note Servis’ crazy 41% strike rate at Laurel during the meet.

#7 Navy Commander (Reid/Lopez) – 12/1 – Needed three tries and a lower-level maiden claimer to get his first win, but then proceeded to win two straight by a combined 18-lengths at Parx.  Talk about mixed signals!  Paco Lopez is in to ride, which would put him on or near the lead.

#8 American Lincoln (Rice/Alvarado) – 8/1 – Devoured an Aqueduct maiden field by 18 ¾-lengths on March 16 and while the track has been playing slow, it’s hard for me to see the final time that day (1:56 3/5) and have a ton of confidence.  I like that Junior Alvarado is in town to ride, but he needs to show me ore.

#9 Dynamic Asset (Gaudet/Garcia) – 12/1 – Have to like that Garcia shows up here instead of the rail-drawn stablemate, but overall he’s hard to endorse.  He was 61/1 when third in the Private Terms on March 17 and this field is deeper than that one.

#10 V.I.P. Code (Schoenthal/Quinones) – 8/1 – Shocked bettors when he won the Private Terms at 36/1, but not sure he has another one of those in him.  He’s outrun his odds before, though. He finished second in the Award Stakes last October at Belmont at 71/1.

#11 Holland Park (McLaughlin/Vargas) – 10/1 – Sneaky Godolphin entrant is impeccably bred, being by Tapit out of the G1 performer Round Pound.  He broke his maiden on February 15 at Aqueduct, but again, like American Lincoln’s maiden breaker, the final time that day (1:57 2/5) just leaves so much to be desired, despite a slow track.  Outside post can’t help his chances, either.

Other Horses Worth Betting Saturday at Laurel

Our Money-Back Guarantee and 0% Takeout offers wrap up this weekend!  Bet a horse in the Xpressbet Federico Tesio and get your money back if they finish 2nd or 3rd.  Plus, you’re eligible to receive 0% Takeout on ‘Tesio Exactas.  Sign up for free to play.