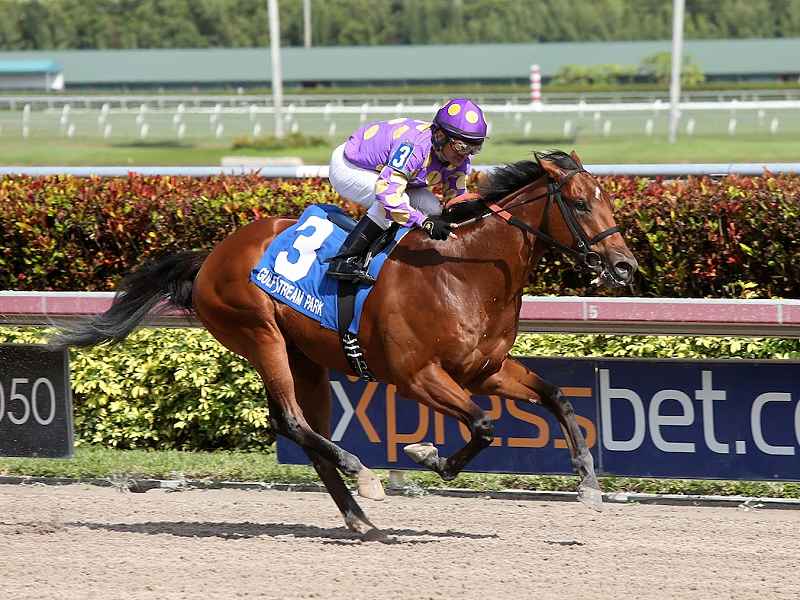 Gulfstream Park’s Summit of Speed returns Saturday and includes many shippers as well as those that have put down roots at Hallandale.

It’s important to scope out horses for the course, and it’s doesn’t take super sleuthing to find two that bring their best over the south Florida strip.

And what may be more impressive is that each went to Pimlico on Preakness Stakes, and despite not winning, gave a good showing and they have their locally based supporters ready to see their return.

Three Rules was 5 of 5 at GP last year as a 2-year-old, mostly against restricted company. He moved to open rivals this spring and despite getting a little roughed up by the stellar company gave a good account of himself and was 2nd in the G2 Swale, 3rd in the G2 Fountain of Youth and 5th in the G1 Florida Derby.

Three Rules latest was a 3rd in the Chick Lang at Pimlico. He was 3rd as the favorite and now trainer Jose Pinchin has brought him back home where he is now 5 of 8. He’s also reunited with jockey Cornelio Velasquez, who has done the most good on him and was the rider of record during his five-race sweep last summer and fall. Hard to imagine him not being real salty in this seven-furlong test. Hooking him up in exotics with Hunka Burning Love, Mo Cash and Benefactor should bring a payoff, and inclusion in multi-race plays is a must.

Likewise, Awesome Banner is back and ready to make his 3rd start for trainer Kenneth Decker. The 4-year-old Awesome of Course colt was a bang-up 3rd behind Whitmore in the Maryland Sprint Stakes. He ran on and lost by a half-length and later was stabled at Laurel thereafter, where he logged two bullet works. He returns to where he’s won 6 of 11 races, and a repeat of his solid 3rd to Whitmore makes him the one to beat. Imperial Hint, Quijote and Delta Bluesman likely will be his strongest competition and are a good fit with Awesome Banner in the exotics and like Three Rules is a big player in the multi-race exotics.

Sometimes you can go home again, and Three Rules and Awesome Banner are out to prove it in fine fashion.

You know it’s a good card if Calgary Cat shows up in the 4th race.

That’s what is happening Sunday on the terrific Queen’s Plate card at Woodbine.

Calgary Cat is among those set to go in the Grade 2 Hilander Stakes at six furlongs over the turf.

You can find horses that can beat Calgary Cat; you might have a problem finding any that try harder.

The Hilander has a $250,000 purse, which means if the 7-year-old Ontario-bred son of Cowtown Cat wins his bankroll will topple $1 million.

Sometimes you can tell more about horse when he loses. It’s not that he loses, it’s that he goes down to defeat in style. Two performances stand out in those 18 races he lost. In his last start, he came from far back and was on the short end of a three-horse photo behind Tower of Texas and Commute. He was six-wide and ninth turning for home, had an impressive through the stretch and lost by a neck.

Last fall, when he jumped into the 6.5-furlong Breeders’ Cup Turf Sprint, he was 13th, some 12 lengths behind after a half-mile, was 14th in midstretch, and sailed home for 4th, beaten only 2 1-4 lengths by Obviously.

Calgary Cat does his best when he has a solid pace in front of him, and he’ll get it Sunday. Jockey Luis Contreras can get him back to the winner’s circle, and if the 5-to-2 odds (from the morning line) aren’t enough, he’s usable in the exotics with Commute, Green Mask and Commend.