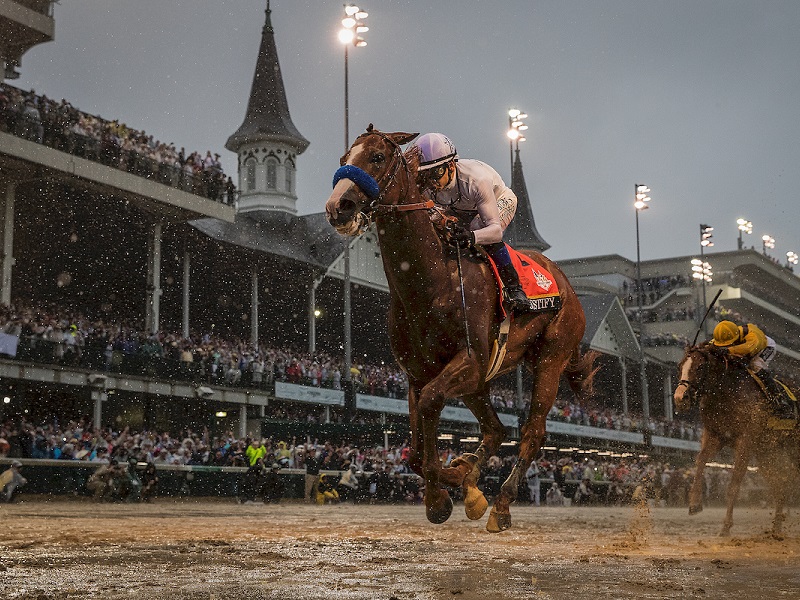 Secretariat won the 1973 Kentucky Derby by 2 1/2 lengths. Sham ran his heart out but had to settle for second.

Justify won the 2018 Kentucky Derby by 2 1/2 lengths. Good Magic ran his heart out but had to settle for second.

Two weeks after Secretariat’s Kentucky Derby victory, he won the Preakness Stakes. His margin of victory once again was 2 1/2 lengths. Sham once again ran his heart out. And Sham once again had to settle for second.

Three weeks after Secretariat’s Preakness victory, he won the Belmont Stakes by 31 lengths in what many regard as the greatest performance in American racing history. Sham did not finish second this time. Sham wound up last in the field of five.

Two weeks after this year’s 1 1/4-mile Kentucky Derby, I believe it is a mighty tall order for Good Magic or anyone else to defeat Justify in the 1 3/16-mile Preakness. Oh, sure, it’s a race. Oh, sure, anything can happen. But I think Justify is about as close to a sure thing as it gets.

Here are my Preakness selections:

Chad Brown, who trains Good Magic, has said that Justify and Good Magic will be doing something they have never done before in that they both go into the Preakness just two weeks after they last raced.

“We’re hopeful our horse responds to that well,” Brown said in a BloodHorse story written by Jeremy Balan. “If you’re asking how we’re going to close the gap a couple of lengths, that’s it.”

I really respect Good Magic. He’s a very good colt. Good Magic made history last year by becoming the first maiden to ever win the Breeders’ Cup Juvenile. He was voted the 2017 Eclipse Award as champion 2-year-old male.

The way I see it, Good Magic is the only horse in this year’s Preakness who is in Justify’s league. But as good as Good Magic is, I will be very surprised if he turns the tables on Justify this Saturday at Pimlico.

Justify has been installed as the 1-2 Preakness morning-line favorite by Pimlico oddsmaker Keith Feustle. Good Magic is the 3-1 second choice. Everyone else is 12-1 or higher.

To be perfectly honest, if Justify starts at 1-2, I believe that actually would be a decent price. I expect Justify to be 2-5 or shorter, probably 1-5.

There are several reasons why Justify is likely to prevail in the Preakness and then head to the Belmont with a chance to become the sport’s 13th Triple Crown winner.

For one thing, Justify has to outrun only seven opponents this time compared to having had to defeat 19 foes in Louisville.

The early Preakness pace does not figure to be anywhere close to as fast as it was in the Kentucky Derby when the preliminary fractions were a blistering :22.24 and :45.77. If the early pace is indeed not as rapid this Saturday, it should make Justify extremely hard to beat.

There also is the perfect record of Justify’s trainer, Bob Baffert, when running a Kentucky Derby winner back in the Preakness. Baffert is four for four when doing this. The Hall of Famer won both races with Silver Charm in 1997, Real Quiet in 1998, War Emblem in 2002 and American Pharoah in 2015. American Pharoah would go on to capture the Belmont Stakes to become the first Triple Crown winner since Affirmed in 1978.

Further proof of Baffert’s prowess when asked to run a horse in the Preakness just two weeks after the Kentucky Derby is he also has won the Preakness twice with horses who did not win the Run for the Roses -- Point Given and Lookin At Lucky.

Point Given ran fifth in the 2001 Kentucky Derby. It was the only time in his 13-race career that he did not finish first or second. Point Given won the Preakness by 2 1/4 lengths. He would go on to win the Belmont by 12 1/4 lengths, Haskell Invitational Handicap by a half-length and Travers Stakes by 3 1/2 lengths on his way to being voted 2001 Horse of the Year.

In 2010, Lookin At Lucky was very unlucky to draw post 1 in the Kentucky Derby. After getting knocked around in the opening furlong as if he were an equine punching bag, he found himself 18th early and finished sixth. A fortnight later, Lookin At Lucky had much better luck in Baltimore. He had a good trip in the Preakness and won by three-quarters of a length. Lookin At Lucky was voted the 2010 Eclipse Award as champion 3-year-old male.

Baffert has said that he believes one of the reasons for his success when running a horse in the Preakness just two weeks after the Kentucky Derby is what he had to do for many years when competing in futurities and derbies during his Quarter Horse days.

For futurities and derbies during Baffert’s time as a Quarter Horse conditioner, qualifying trials generally would be held one week earlier. Baffert learned to deal with what he called “the quick turnaround in the Quarter Horse world” by having a horse “run well enough” to qualify for the futurity or derby, but “not too well.” The goal was for the horse to come back a week after the trial and be able to take a serious run at winning the futurity or derby.

Speaking of wet tracks, reports are it is almost a certainty the track will be that for this year’s Preakness. But fortunately for Justify, he is not Riva Ridge.

Justify is two for two when racing on a wet track. He won a one-mile allowance/optional claiming race by a ridiculously easy 6 1/2 lengths on a muddy track March 11 at Santa Anita. His Kentucky Derby triumph came on a sloppy strip.

As for Riva Ridge, a wet track likely prevented him from a Triple Crown sweep in 1972. After his sparkling 3 1/4-length win in the Kentucky Derby on a fast track, Riva Ridge was a heavy 3-10 favorite in the Preakness. But Bee Bee Bee won on a sloppy track in an 18-1 upset. Riva Ridge struggled in the slop and finished fourth. Back on dry land in the Belmont, Riva Ridge won by seven lengths.

The following year, Secretariat did sweep the Triple Crown. If the track had been fast for the 1972 Preakness, I think Riva Ridge also probably would have been a Triple Crown winner. That would have meant back-to-back Triple Crowns for owner Meadow Stable, trainer Lucien Laurin and jockey Ron Turcotte.

One of the many reasons I am picking Justify to win the Preakness is he started in the Kentucky Derby. When I am deciding who to go with in the Preakness, I make it a practice to toss out all those who did not run two weeks earlier in the Derby. That’s because only four of the last 34 Preakness winners (Red Bullet in 2000, Bernardini in 2006, Rachel Alexandra in 2009 and Cloud Computing in 2017) did not start in the Derby.

In addition to Justify and Good Magic, the two Preakness entrants who ran in the Kentucky Derby this year are Bravazo and Lone Sailor. Bravazo finished sixth in the Derby, while Lone Sailor ended up eighth.

Baffert and Lukas both have won the Preakness six times. While Baffert’s lone representative this year will be Justify, Lukas has two entrants in Bravazo and the quirky Sporting Chance.

If either Baffert or Lukas wins another Preakness this Saturday, they will tie the record of seven wins in this race by a trainer set by Robert Wyndham Walden in the 1880s.

Still another stat in Justify’s favor is how many Kentucky Derby winners have been victorious in the Preakness going back to 1997. A horse has won both races 52.3% of the time in the last 21 years, with 11 victories in both the Kentucky Derby and Preakness this period.

Here is a look at the last 21 Preakness winners and their most recent race:

Justify’s 107 is by far the best Beyer Speed Figure earned by anyone in this year’s Preakness. The next-best Beyer is Good Magic’s 100 in the 1 1/16-mile Breeders’ Cup Juvenile last Nov. 4 at Del Mar.

Justify has posted a triple-digit Beyer Speed Figure in all four of his starts. The rest of the Preakness field has made 45 career starts combined, with only a single triple-digit Beyer recorded, that being Good Magic’s aforementioned 100.

To give you an idea of what kind of a Beyer Speed Figure it typically takes to win the Preakness, here are the figures for the Preakness winners going back to 1991:

A DIFFERENCE OF OPINION REGARDING 2012

I cringe each time I hear somebody say that Bodemeiser was the best horse in the 2012 Kentucky Derby. I have heard that said many times through the years.

They say Bodemeister did not win the Kentucky Derby even though he was the best horse because he set such a sizzling pace (:22.32, :45.39, 1:09.80) when pushed by Trinniberg, who became a champion sprinter.

I do not disagree that Bodemeister set a wickedly fast pace in the Kentucky Derby. But if Trinniberg was the reason Bodemeister did not win the Derby, then why was Bodemeister unable to beat I’ll Have Another two weeks later in the shorter Preakness when there was no Trinniberg in the race?

Something else that indicates Bodemeister wasn’t the best horse in the 2012 Kentucky Derby was his overall record compared to I’ll Have Another’s.

I’ll Have Another was the best horse in the 2012 Kentucky Derby. Period. He affirmed that when he beat Bodemeister again in the Trinniberg-less Preakness.

It was 38 years ago this week that I was working for the Daily Racing Form at Longacres near Seattle when Mount St. Helens blew its top in the deadliest and most economically destructive volcanic eruption in the history of the United States. The Mount St. Helens eruption especially comes to mind this week considering what is going on with Hawaii’s Kilauea volcano.

The 1980 Mount St. Helens eruption occurred on May 18. That day at Longacres, Trooper Seven completed six furlongs in 1:09 1/5 to register an impressive victory in the Renton Handicap with Gary Baze aboard for owner-trainer Eugene Zeren. Trooper Seven would go on to win the biggest race in the Pacific Northwest, the Longacres Mile, in 1980 and again in 1981.

After the eruption, to the east of Mount St. Helens, there was so much ash in Yakima, Wash., that during daytime it became almost as dark as at night. The races were going on that afternoon at Coeur d’Alene, a little track in Idaho about 30 miles east of Spokane, Wash. They did not finish the card that day in anticipation of the ash that did ultimately arrive there. Ash from Mount St. Helens would be deposited in a dozen states.

Two weeks after the Mount St. Helens eruption, I drove from Seattle to Spokane en route to my next Racing Form assignment at Louisiana Downs. Driving on I-90 across Washington often was rather difficult from a visibility standpoint because there was so much ash from the volcano being blown around by the wind and vehicles. Driving near any 18 wheelers was particularly challenging.

“That’s not dirt,” I said. “That’s ash from the volcano that blew earlier this year in the Pacific Northwest. Look at my license plates. They’re Washington plates.”

And keep it all he did.