Belmont’s Not Done Yet 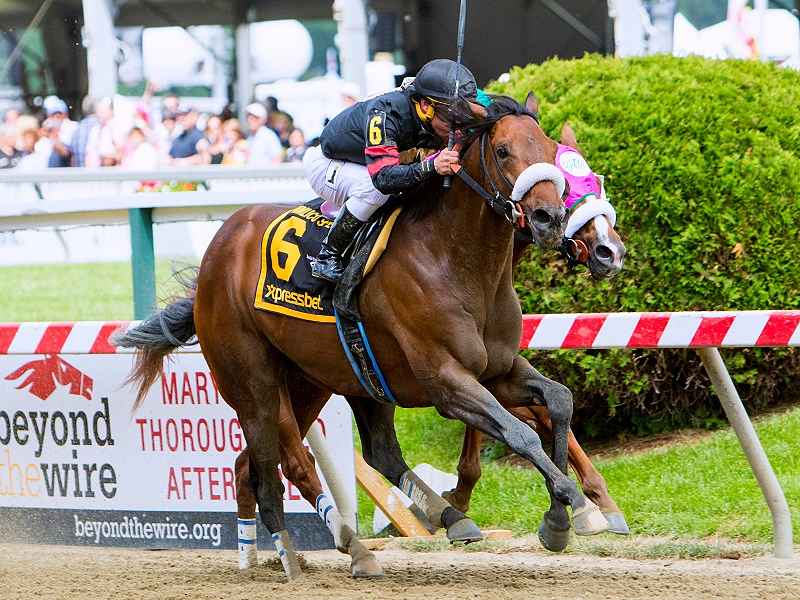 While, for the most part, the heavy lifting at Belmont Park does in fact end with the monster Belmont Stakes card in early June, Saturday marks a fitting finale filled with plenty of fireworks when they run their “Stars and Stripes” card, that features five lucrative stakes, highlighted by a pair of GI for 3yo turfers in the Belmont Derby for the colts and Belmont Oaks for the fillies. Let’s take a brief look at all five stakes, in what is unquestionably a great segue to what will surely be some pure power this summer at Saratoga.

While there may be just five entered, the Dwyer offers an exciting matchup between BATTALION RUNNER and PRACTICAL JOKE, who were Triple Crown heavyweights this year and will make their first start since the trail this spring. The edge goes to the former, who has more tactical speed and brilliance than the latter and looks like he could be a crack one-turn miler for Todd Pletcher. PRACTICAL JOKE was a surprisingly good 5th in the Kentucky Derby and is a local GI winner at this trip, and it’s tough to play against Chad Brown, but the gut says he’s not as good as BATTALION RUNNER, not to mention he’s going to be behind him the entire way as well. it’s tough to envision a scenario where either BATTALION RUNNER or PRACTICAL JOKE doesn’t win, but GIUSEPPE THE GREAT was a very good 2nd in the local GII Woody Stephens and does have upside, as that was just his fourth lifetime start for Nick Zito.

R7: The GII Belmont Park Sprint Championship for 3yos and up at 7 furlongs

It’s tough to argue with anyone who thinks MINE YOUR BISCUITS isn’t the best one-turn horse in the world on dirt, but I’m coming back to UNIFIED, who beat him in the GII Gulfstream Park Sprint Championship to kick off their year then was a huge disappointment when he couldn’t win a bad renewal of Aqueduct’s GI Carter over longshot GREEN GRATTO. The reason is two-fold, as I still think Unified has a ton of talent and is the better horse, but he also has a huge race flow edge, as he’ll be pressing the speed of GREEN GRATTO in a race where no one else wants to go early. Price players can look to STALLWALKIN’ DUDE, TOMMY MACHO and AWESOME SLEW, but all of them are at the mercy of the pace, and likely not as good as the top pair anyway.

“Depth” and “competition” come to mind in this 12-horse field, as there as several different ways to go, while having to sift through some European firepower too. I was thinking SISTERCHARLIE was vulnerable to begin with, and the fact she drew the outside stall makes me think she’s even more so, as that 2nd in a subpar renewal of the GI French Oaks isn’t as impressive as it might seem, and the fact she now starts for Chad Brown means she’s be a big underlay too. UNI, Brown’s other Euro import, will offer a lot more value and gets Lasix too (which SISTERCHARLIE doesn’t), and has Irad Ortiz, which is never a bad thing. I don’t do jockey’s musical chairs, but if it’s for you, then take note Ortiz lands on UNI, while john Velazquez, who rarely rides for Brown, is on SISTERCHARLIE. NEW MONEY HONEY is the best of the proven runners, and offers yet another chance for Brown to get a win, but she’ll need to run faster than her walking win in the local prep, the GIII Wonder Again. Coolmore and Aidan O’Brien appear to be sending a third stringer in KEY TO MY HEART, who has been outclassed on the group stakes level in Europe and may simply have had a stall on the plane and decided to walk on, since some of her classier stablemates were already coming for the Derby. In a race where taking a price seems prudent, what’s wrong with BEAU RECALL, who has lost three times to the undefeated star California filly Sircat Sally and has budding superstar Flavien Prat? Sign me up in the 12-1 to 15-1 range.

R9: The GII Suburban Handicap for 4yos and up at 1 ¼ miles

If you’re looking for a single in the sequence, then it has to be SHAMAN GHOST, who is arguably the second-best dirt router in the country and wins this easily if he runs back to any of his last three. If there’s a worry, he’s at the mercy of the pace, which will be set by the never been better MATT KING COAL, but the leveler could be the 10 furlongs, which he’s much more suited for. If KEEN ICE wins this race, I don’t, as he’s just a slow, plodding runner who just doesn’t inspire, especially if he’s in the 4-1 range. California invader FOLLOW ME CREV lost to a few Bob Baffert stars in Collected and Cupid in his two most recent runs, but the distant 3rd three-back to SHAMAN GHOST says he’s not a win candidate.

It’s not often that the Americans have the edge in a stakes like this, but I think that’s the case this year, as the Coolmore runners—HOMESMAN and especially WHITECLIFFSOFDOVER—and also the European CALLED TO THE BAR, seem a bit second tier. I have the most respect for the latter, who has turned into a new horse since going long for Pia Brandt two-back, but I’m siding with the home team in this one. There’s little doubt OSCAR PERFORMANCE is loose on the lead in here, and that worked winning the local prep, the GIII Pennine Ridge, but I have my worries about him going this far. Poor GOOD SAMARITAN seems to always have an excuse, and he had no real chance when he got no pace when 2nd in the Pennine Ridge, but that looks like the case again today, though he always makes a big run. ARKLOW is streaking and is himself since getting to the turf, and is another who will be closing. But the one I want is YOSHIDA, who has been stunning in his last two and should revert to a tactical style that will have him closest to Oscar Performance early. He’s got as much upside as anyone here and seemingly can be placed anywhere, which is a big edge in a race like this.