Are We Sure this is the Same Justify that...? 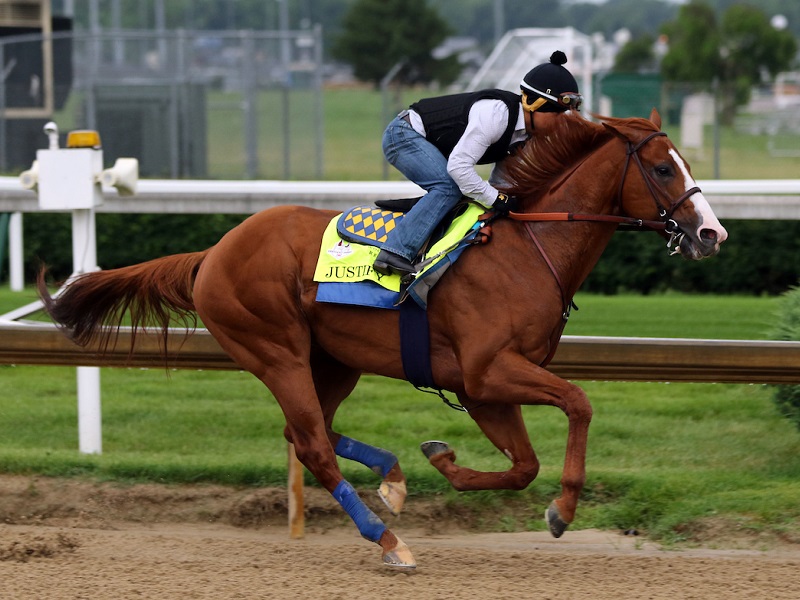 Tuesday morning, via Internet magic, I watched Justify breeze at Churchill Downs (VIDEO). It was his first serious exercise in nine days, since the Preakness, where he traded body blows throughout with 2-year-old champ and Kentucky Derby runner-up Good Magic, before ultimately holding clear from the hard-charging Bravazo.

Going in, there was no doubt in my mind that Justify would win the Preakness. Fortunately, I backed my conviction with wagers. None of my exotic tickets had anything but Baffert’s newest superstar keyed on top. But, after Justify battled with Good Magic for about a mile and one-eighth over the muddy surface, and then successfully denied two serious challenges—first one from Tenfold and then one from Bravazo—visions of mad stacks of Benjamins danced in my head. I thought, ‘I will make a fortune in the Belmont Stakes betting against Justify!’

Racing aficionados worldwide shared a similar opinion that the ‘Wonder Horse’ finally had had enough. His Preakness Beyer Speed Figure is 97, the lowest in his career. Also, his winning margins have decreased in each subsequent race. In the Preakness, four runners all finished within less than 2 lengths—a suggestion that none was dominant.

I have a few questions.

Are we sure that this is the exact same horse that won this year’s Kentucky Derby and Preakness Stakes?  Positive that this is the identical colt that since Feb. 18 has jammed six career races into a mere 100 days, including a trio of Grade 1 stakes victories? Do we have any proof that this is the same fellow that, just a few weeks ago, paraded before a media horde and then limped back to his stall?

Reason I ask is because on Tuesday morning, May 29, Justify appeared as fresh as a daisy. As bright, shiny and blinding in the sun as a newly-minted copper penny. Not a scratch on him. Cherry. There’s no way that the ‘Justify’ on the track Tuesday is the same one that took down the first two legs of the Triple Crown. No horse can accomplish that, plus everything else Justify’s done, without consequence.

Don’t smirk. Stranger things have happened. Baffert is based at Santa Anita in Southern California, not far from Hollywood. The worker this morning could have been a ‘body double.’ A ringer. Baffert trains so many head he probably had a Justify look-alike in training at Los Alamitos. Before races in the afternoon, an identifier verifies tattoos. In the morning, nada, zip, nothing. Who would know that this was an imposter? That while this fraud was busy breezing a half-mile the real Justify was resting comfortably in his stall munching carrots?

By all rights, Justify ought to be tuckered out, showing signs of wear and tear, mileage, attrition. Remember, just a few years ago, when winning the Triple Crown was viewed as an impossible challenge for poor, immature 3-year-olds? Hand-wringing revisionists demanded then that the schedule be altered to allow for more time between events. They held that winning the Derby and Preakness within two weeks, followed by the Belmont Stakes three weeks later was just too much and that the series should be deemed unconstitutional due to cruel and unusual punishment.

Jockey Martin Garcia, a Baffert stable stalwart, winged-in from Southern California to pilot the workout. He reportedly hadn’t been aboard Justify in a while. Makes sense. The usual exercise rider or jockey Mike Smith would have immediately noticed the subterfuge. They probably wouldn’t have cracked, though. Omerta is a gabfest compared to tight-lipped backside protocol.

To add to the con, Baffert worked an audio connection to Garcia as intently as a coach transmitting a crucial third down-and-eight play to a quarterback’s helmet headset. As usual, instructions, were brief, simple and clear. Nothing out of the ordinary there.

The workout went perfectly with Garcia sitting still and Justify (or whoever it was) absolutely breezing along in splits of 13.20, 23.60 and 35.20, with a final half-mile clocking in 46.80. Garcia permitted his mount to gallop out five furlongs in a snappy 59.60.  Ears pricked, willing to do more, the chestnut responded to his rider’s request to pull up.

It was then that I realized my conspiracy theory was all wet. You see, as much as I believe the real Justify should be showing signs of being a bit knocked out, is as much as I know there’s not another horse around with that stride, moving that effortlessly, that could work 46 and change, out in 59.60 with his ears pricked! No doppelganger there. It’s the one and only Justify!

There’s a legitimate reason why before May of this year no horse since 1882 had won the Kentucky Derby without racing as a 2-year-old. And that is foundation. You can’t build a house without a solid foundation. And, previously, except for Apollo, it was fact that you couldn’t win a Kentucky Derby without one either. Then Justify lifted the curse, ended the jinx, broke the spell. He became the exception. And then he pushed the envelope. He won the Preakness and became unique. You see, NO horse had ever won the Derby and Preakness without racing as a 2-year-old. That’s ‘ever,’ as in ‘never,’ which, in horse racing (and in real life), is a long, long time. Justify now heads to Belmont Park on another collision course with history as he attempts to become the 13th winner of the Triple Crown.

I know, many others have tried and failed to turn the triple play, coming up short in the final yards of that sandy stretch. But they weren’t Justify. In fact, no one can even pretend to be him. He’s one of a kind.