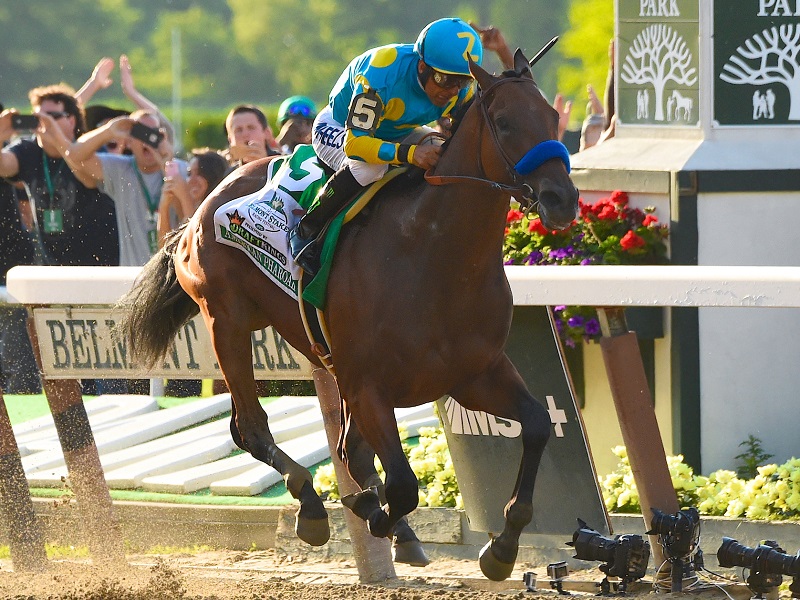 No one likes the person who gives away the ending to the movie. So forgive horse racing fans who are a bit miffed at American Pharoah this week. It’s not as though the noble steed looked over his popcorn and gave away the plot, but his 2015 Triple Crown sweep let us in on exactly what the cliffhanger looks like upon successful execution. We know the good guy gets the girl; the bad guy goes to jail; and the credits roll out at the end.

We saw the movie just 3 years ago.

So can Saturday’s sequel at Belmont Park live up to the original, which took 37 years and literally a generation or two of horseplayers, to make? Chances are unlikely, which is why the 3 weeks since the Preakness have seemed tamed by comparison. This hardly has been akin to 20,000 people showing up at Philadelphia Park to watch Smarty Jones breeze one morning in 2004.

Part of the lowered enthusiasm for the sequel has to do with the actors. Bob Baffert returns to co-star, and the American public has seen him successful in this realm and throughout his 14 career Triple Crown race victories, now tied for most all-time with D. Wayne Lukas. I have a friend outside the industry who texts me each May to ask, “Who does that Buford guy have this year?” and our bartender in Baltimore proudly stated she was a big fan of Bob Balfour. Even if John Q. Public messes up the general casting call ever-so-slightly, you get the idea – people know the white-haired guy with shades, and they know he pulled off the American Pharoah history maker.

Of course, a second Triple Crown bid in 4 years isn’t exactly the Golden State Warriors and Cleveland Cavaliers for a fourth straight NBA Finals. It’s not like Alabama winning national football titles in 2009, 2011, 2012, 2015 and 2017. Horse racing doesn’t get the benefit of dynasties or alumni brands that continue to build annually.

For the Triple Crown to be the biggest deal in sports, it has to be a big deal to win. Attendance in the 1970s lowered for Affirmed’s third successful sweep of the decade in 1978, following Secretariat in 1973 and Seattle Slew the year prior. We may want to blame today’s fickle society that’s wired to electronics and the instant need to feel good, but such also was the case some 40 years ago. Horse racing fans will remember the 1978 Triple Crown forever because of the amazing rivalry between Affirmed and Alydar. The general public already had their fill.

My advice to a horse racing industry and fan base that I am so intimately a part of is to embrace the moment from within. Appreciate Justify as an unbeaten, the exorcist of Apollo and perhaps the latest of the greatest 3-year-olds you’ve ever seen. Come out in droves on Saturday to Belmont, your local racing establishment or by way of your online account. Line up to see history, bet on a potential all-timer or utilize your gambler’s prerogative to try and beat him.

But don’t frustrate yourself trying to force feed the general public, and don’t finger-point afterward about how this or that should have been done to draw more interest. I have a saying in horse racing: You can’t beat the calendar. Timing dictates everything in an industry whose ebbs and flows map out nearly identical each and every year on the calendar no matter what you do. For 37 years, the lure of an elusive Triple Crown winner – and how it would impact the life of sports and pop culture fans – was part of that bell curve.

The Triple Crown remains a fantastic horse racing accomplishment for the ages, still achieved only 12 times. But twice in 4 years won’t move the general public. We’ll have to wait a long while for that to happen again to nobody’s fault.
Well, maybe we actually CAN blame American Pharoah for that. But I don’t know a single person there that day in 2015 who would dare trade it in for anything.