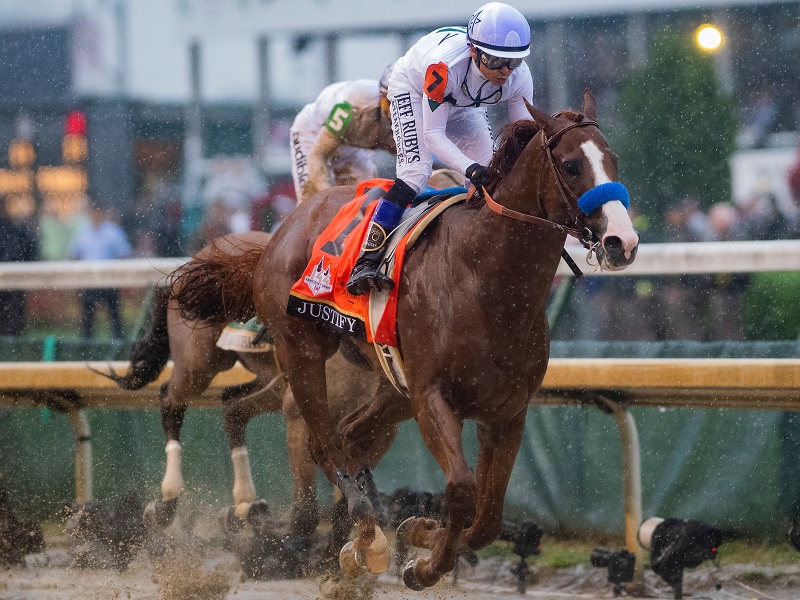 The Pick 4 is not only a way to kill some time before the Belmont Stakes, it’s a primo opportunity to do a cannonball into this attractive pool, which is guaranteed to be $1 million. But let’s face it, the eyes of the racing world are on this card, and Pick 4 money will be flying in from all betting ports of call.

Four races – all Grade I – and a chance to see another Triple Crown. What do you want?

Here’s a look at the possibilities…

This is an amazing way to start the Pick 4 as eight even-matched fillies and mares go a mile on the turf. I don’t often use the ALL button. This is one of those times. From top to bottom, these are talented distaffers, and any of them could get it done. On Leave is probably as reliable as any here, and if you don’t go the ALL route and would rather whittle down, she has to be included if you are playing just a handful. Manny Franco gets the call for the first time and can probably wrangle a perfect trip out of the deal. A Raving Beauty is the 5-2 morning line favorite, and while she won her only U.S. after running in Germany and Italy, the talent quotient of opponents in this one compared to the Beaugay Stakes is through the roof. She’s worth using, but will be overplayed in the straight pools.

Love this race and always have -- most notably for me in 1989 when Proper Reality beat the powerful coupling of Seeking the Gold and Dancing Spree. It’s a great race this year as well, and it’s a real grab bag of talented horses, many of which have been more used to shorter distances.

There are four on this card – Mind Your Biscuits, Bolt d’Oro, Ransom the Moon and Bee Jersey. Bee Jersey is the now horse with three straight early wins over three different tracks and four wins in his five U.S. races after going 0-of-4 at Meydan in Dubai. Trainer Steve Asmussen has a special kind of sprinter and he gets a little better with each start. He’ll have his toughest American test today and there’s a good chance he’ll answer the call. Mind Your Biscuits, Bolt d’Oro and Ransom the Moon are also on the ticket.

This is one of the more exciting divisions in racing as the older turf performers are spread out nicely and are a game bunch. Sadler’s Joy is has shown as much talent in defeat as he has in victory – but either way he is almost always closing ground. His loss to Hi Happy in the Man O War has a good shot to be corrected. He’s been among the best in American turf racing and will get a rider change to Javier Castellano, who was 3rd aboard him at Saratoga.

It’s difficult to leave Beach Patrol off the ticket, so I won’t. He lost to Yoshida in the Turf Classic at Churchill in his 1st of the year and likely will be ready for his usual big effort in his 2nd one back.

I’ve been on Justify train from the start, and this is no time to switch. He’s deserving of his 4-to-5 morning line odds and likely will be very difficult to catch. However, there’s a reason they don’t hand out Triple Crowns with regularity. The Belmont is a grueling 12 furlongs and it’s not a giveaway. Justify held on for a half-length win the Preakness, but he wasn’t as desperate as some would have you believe. Makes for a good story and gives others a chance for the Belmont, but the Preakness was not in jeopardy.

If Justify can’t get the distance, Tenfold could be the one that benefits the most. He’ll likely be closest to the leader (and that would be Justify, of course) and could take over if the top one falters. Justify is a strong choice, but Tenfold could be the upsetter if that indeed occurs. Those two are on this ticket.

Here’s the suggested ticket for $1 million-guaranteed Pick 4 at Belmont: