Speculation Builds for Justify's Next Race 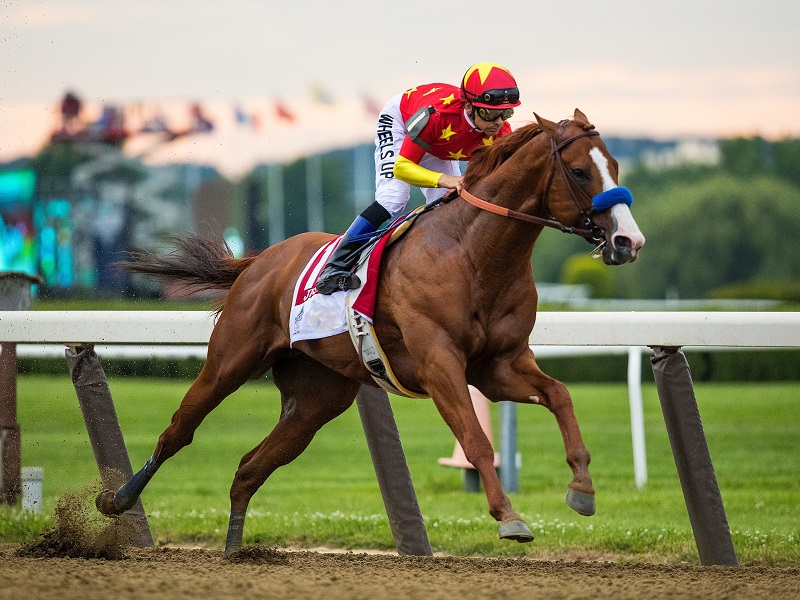 Justify’s connections have indicated the sport’s 13th Triple Crown winner will continue racing after his victory in the June 9 Belmont Stakes. With that in mind, it’s perfectly understandable why many people are pondering when and where the undefeated superstar might go postward next.

It certainly will not be surprising if Justify makes his next start on July 29 in the Baffert Invitational, a race more formally known as the Haskell Invitational.

It seems fitting to refer to the Haskell Invitational as the Baffert Invitational because Justify’s trainer, Bob Baffert, has won the 1 1/8-mile race at Monmouth Park a record eight times.

When Justify won the Belmont Stakes in front-running fashion by 1 3/4 lengths on June 9, he became just the second Triple Crown winner in the last 40 years. His sweep came three years after American Pharoah achieved the feat. Hall of Famer Baffert also trained American Pharoah. Prior to American Pharoah, no horse had won the Triple Crown since Affirmed in 1978.

According to Baffert, in terms of Justify’s next race, they probably “won’t make that call for a couple of weeks.” But because Baffert ran American Pharoah in the Haskell after his Triple Crown sweep, it’s reasonable to think there is a good chance the trainer will do likewise with Justify.

If it’s decided to forego the Grade I Haskell to afford Justify more time before he races next, then he might make his next start in Saratoga’s Grade I Travers at 1 1/4 miles on Aug. 25. Baffert won the Travers in 2016 with Arrogate and in 2017 with West Coast after American Pharoah had finished second to Keen Ice in the 2015 renewal. Baffert also sent out Point Given to win the 2001 Travers.

Justify returned to Baffert’s Santa Anita barn last Sunday amid much fanfare. The grand-looking chestnut colt is scheduled to be paraded during this Saturday’s card at the Great Race Place. Santa Anita will be giving away Triple Crown posters to the first 4,000 attendees. The posters are free with paid admission.

JUSTIFY IS BC CLASSIC FAVORITE AT THE WYNN

Wynn Sportsbook and Racebook director John Avello has installed Justify as the 5-2 future book favorite at that Las Vegas establishment for the 1 1/4-mile Breeders’ Cup Classic at Churchill Downs on Nov. 3.

Baffert trains 11 of the 68 horses on Avello’s list for the BC Classic. In fact, the three horses with the lowest odds all reside in the powerful Baffert barn. The three are Justify, West Coast at 7-1 and Collected at 12-1.

As an example of how radically things can change in less than three months, Justify was the 4-5 favorite when he won the Santa Anita Derby by three lengths over even-money second choice Bolt d’Oro on April 7. Now, in late June, while Justify is the 5-2 favorite for the BC Classic, Bolt d’Oro is 75-1 for that same race.

These are the Wynn’s 68 BC Classic candidates and their odds:

Pavel lurked in fourth early and appeared headed for another defeat when he could not keep pace with 4-5 favorite Backyard Heaven heading to the far turn. But Pavel advanced quickly on the far turn to take command entering the stretch.

As Pavel bounded down the lane under the purple and white Reddam silks, it brought back memories of Kentucky Derby victories by I’ll Have Another in 2012 and Nyquist in 2016 for the same owner and trainer on that same track.

Sent away at odds of 6-1, Pavel won the Stephen Foster by 3 3/4 lengths. Honorable Duty, 7-1, finished second in the field of nine. Matrooh, virtually ignored in the wagering at 68-1, ended up third, a neck behind Honorable Duty. Backyard Heaven faltered in the stretch and finished sixth.

For Pavel to win so convincing is especially significant this year because the BC Classic will be held this fall at Churchill Downs. With the Stephen Foster a “Win and You’re In” race for the Breeders’ Cup, Pavel earned an automatic berth in the Classic.

Gun Runner won last year’s Stephen Foster by seven lengths. That began a four-race winning streak. Gun Runner went on to win the Grade I Whitney and Grade I Woodward, both at Saratoga, and the Grade BC Classic at Del Mar on his way to being voted 2017 Horse of the Year.

Pavel appeared to have a bright future after his first two career starts. He won by 4 1/2 lengths when unveiled in a 6 1/2-furlong maiden special weight race at Santa Anita last year on July 1. Off just that one sprint victory, he ran fourth in the Grade II Jim Dandy at Saratoga. In the 1 1/8-mile Jim Dandy, Pavel finished only a head behind Kentucky Derby winner Always Dreaming. Pavel also finished a head in front of Preakness winner Cloud Computing.

But Pavel then did not win another race until last Saturday. The 4-year-old Kentucky-bred Creative Cause colt was assigned a 101 Beyer Speed Figure for his Stephen Foster triumph.

Pavel recorded a pair of Beyer Speed Figures higher than 101 last year. Pavel earned a 103 when he won the Grade III Smarty Jones at Parx by six lengths. His career-best Beyer is his 104 when third behind Diversify and Keen Ice in last year’s Grade I Jockey Club Gold Cup. In Pavel’s final 2018 start, he finished 10th in the Grade I BC Classic at Del Mar.

These are the Beyer Speed Figures for the winner of the Stephen Foster going back to 1991:

RACE FOR TRAINERS IN THEIR NINETIES AT EMERALD

Last Sunday’s sixth race at Emerald Downs was the “Not in Any Rocking Chair Starter Allowance,” a six-furlong contest for trainers age 90 and older.

The race drew a field of five, with one trainer entering two. The oldest trainer, 94-year-old Arturo Arboledo, won the race. Arboledo conditions Regazze Cat, who led past every pole and prevailed by 2 1/2 lengths. Arboledo also trains Cats Gulch, who finished third.

This novel race reminded me of something that happened when I was working for the Daily Racing Form in the Pacific Northwest at Playfair in 1977. There was an abundance of horses age 10 and older running well there that year. One morning I mentioned to Jim Price, the track announcer and publicity director, that perhaps Playfair should have a race for 10-year-olds and up.

Buck Hopkins was the racing secretary, who liked the idea. Hopkins carded the Rocking Chair Handicap for Aug. 28, 1977. It was an invitational race at 6 1/2 furlongs for 10-year-olds and up. It attracted a field of eight.

The Rocking Chair Handicap would continue to be held at Playfair for many more years.

To no one’s surprise, Triple Crown winner Justify is No. 1 in this week’s NTRA Top Thoroughbred Poll. What is surprising -- no, make that shocking -- is he did not receive all of the first-place votes.

Justify received 31 of the 32 first-place votes cast. How each person votes in the poll is listed on the NTRA’s website. The one person who did not rank Justify at No. 1 was Anthony Stabile, who put Mind Your Biscuits in that spot. Stabile put Justify at No. 2.

I am not one to criticize someone’s vote very often. Everyone is entitled to their opinion. But to rank Mind Your Biscuits instead of Justify at No. 1 is absurd.

Justify is six for six this year, with four Grade I wins, including a Triple Crown sweep. Mind Your Biscuits? He is winless in two starts in this country this year.

Mind Your Biscuits’ only 2018 victory came in the Group I Golden Shaheen in Dubai. In the United States this year, he finished second in a seven-furlong allowance/optional claiming race at Gulfstream Park on Feb. 9 and second in the Grade I Met Mile at Belmont Park on June 9.

The very same day, June 9, that Justify won the Grade I Belmont Stakes to complete a Triple Crown sweep, Mind Your Biscuits got beat, albeit by just a nose, to Bee Jersey in the Met Mile.

This was the final NTRA Top 3-Year-Old Poll of 2018 on June 11 following the Belmont Stakes: