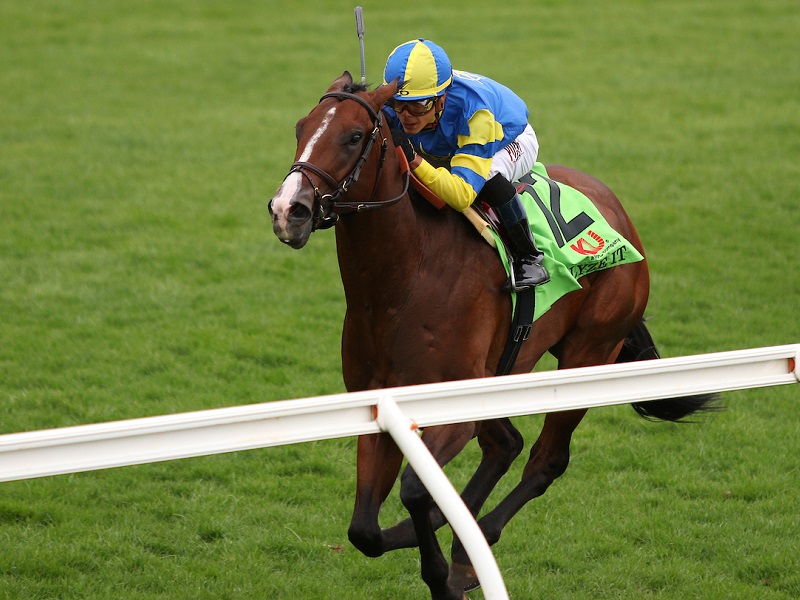 Despite taking place three days after the Fourth, Belmont’s ‘Stars & Stripes’ Saturday card is loaded with the types of fireworks and sparklers that handicappers and racing fans can’t afford to pass up.  And hey, who ever complained about a ‘holiday after a holiday’?  I’m on board for two in four days and I hope you are too.

Before we get to the races, I’d be incredibly remiss if I didn’t mention two pretty awesome things taking place in the Xpressbet world on Saturday:

But now that the housekeeping is out of the way, let’s take a look at the Stars & Stripes Stakes races:

It’s a Kentucky Derby rematch (of sorts) as Firenze Fire (11th), Noble Indy (17th) and Mendelssohn (20th) are all back after relatively forgettable performances in the ‘Run for the Roses.’  Of the three, Mendelssohn is obviously the big draw.  After all, he’s a half brother to Beholder and won the G2 UAE Derby by an astonishing 18 ½-lengths.  His regular pilot, world-class jockey Ryan Moore, makes the trip from the UK to ride him and all eyes (and most dollars) figure to be on that tandem to right the ship as they begin preparations for the Breeders’ Cup Classic in November.  The last time Firenze Fire raced at Belmont, he upset Good Magic (and a host of others) in the G1 Champagne Stakes last fall.  His trainer, Jason Servis, is off to an extraordinary start to the meet, winning at a 47% clip.  Rugbyman adds blinkers after a decent runner-up performance in the Easy Goer Stakes on Belmont Day.  This handicapper was unimpressed with his ability to pass the leader that day, but perhaps the blinkers will do the trick?

For a horse that’s 10-for-20 in his career, Whitmore still seems to be searching for a signature win.  He’s won six stakes races – and even took last fall’s Phoenix Stakes at Keeneland at this G2 level – but this one just seems to feel different.  To take home a G2 in New York probably stamps him as one of the horses to beat in the Breeders’ Cup Sprint.  And based by the field that has signed on, he’s going to get his shot.  Eye Luv Lulu and Shaft of Light have to go to the lead.  Neither can rate.  Lewisfield is sharp and should sit just off them.  That makes three horses that have made careers of carving out fast fractions.  And when they do on Saturday, the closers should benefit.  The best of those are the aforementioned Whitmore and Limousine Liberal, who is in the best form of his career off a third-place finish in the G1 Met Mile.  I’ll be keying my bets on those two.

$1 Million is on the line in the Grade 1 Belmont Oaks, and this field looks like a true gem.  Chad Brown has owned this race, waaaay back (please note, sarcasm) to the days it was known as the Garden City Stakes (2013).  Brown has won five of the last six editions of this race, amazingly with five different jockeys aboard.  Brown’s top chance looks to be with Significant Form, who exits a solid runner-up performance behind wire-to-wire winner, La Signare, in the G3 Wonder Again.  Brown’s ‘other’ horse, Mighty Scarlett, was third in that race, but could close in on the pedestrian fractions.  Capla Temptress is back from Europe and the last time she came to North America, she won the G1 Natalma Stakes at Woodbine over Wonder Gadot and Dixie Moon.  She opted out of a race at Royal Ascot to go here instead.  Toinette shocked the previously undefeated Rushing Fall in the G3 Edgewood on Kentucky Oaks Day and previously beat La Signare in a Keeneland allowance.  And finally, despite taking a step up in class, Thewayiam has won 4-of-7 races in the US and was beaten just a neck in the Penn Oaks last time out.  And we didn’t even touch on – until now – Gary Stevens traveling cross-country to ride Paved, who beat the boys in the El Camino Real Derby at Golden Gate.  One of the boys she beat, Blended Citizen, came back to win the G3 Peter Pan and G3 Jeff Ruby.

Bob Baffert had a pretty nice June in New York, taking several prestigious trophies back home to Southern California with him.  And it looks like he’s well poised to add another one to the mantel as he sends out Dr. Dorr and Hoppertunity here.  Dr. Dorr, who’s also entered in the Cornhusker at Prairie Meadows on Friday (check to see if he runs there), would be the favorite here, off a runner-up performance in the G1 Gold Cup at Santa Anita.  That was his first defeat of 2018.  Baffert’s ‘other’ horse is, once again, Hoppertunity, who always seems to be the ‘other’ Baffert horse.  But I guess a stable that has housed stars like Arrogate, Mor Spirit, Dortmund, et al will do that to you.  He’s a perfect 2-for-2 at Belmont and can’t be overlooked.  Can Tapwrit get back on the winning track?  I think he has a big chance.  I didn’t love his comeback race on June 3, but that was just a sharpener and maybe he just got tired.  I wouldn’t want to see him that keen again, though.  Especially against this field.  I’d love to see him relax and get a nice, stalking run like he had in last year’s G1 Belmont Stakes.  He doesn’t have the speed to go with Dr. Dorr and Diversify, so don’t bother.  War Story has always been a cool horse and he’s in good form.  I don’t see him as a likely winner, but he can hit the board.

I couldn’t be more eager for the rematch between Analyze It and Catholic Boy!  The last time they squared off – in Belmont’s G3 Pennine Ridge – everything seemed to happen.  Catholic Boy went right to the lead.  Surprising, given he’d always been a closer.  Analyze It passed him and seemed to set sail for home.  As expected.  The two exchanged bumps down the lane.  As happens in any Hollywood story.  And then Catholic Boy triumphantly came off the inside and re-rallied to pass Analyze It just before the wire.  And now they do it again, against seven other rivals.  Among them is Coolmore’s Hunting Horn, who won the G3 Hampton Court at Royal Ascot and Jimmy Toner’s Hawkish, who won the G2 Penn Mile last out.  Oh, and My Boy Jack, who gets back on the lawn after finishing 5th in the Kentucky Derby.  I’m a glutton for punishment, so I’m going to make Analyze It my top pick.  Maybe he got a little too confident when he made the lead in the Pennine Ridge?  Hopefully the distance wasn’t a bit too much.  If it wasn’t I still see him as a likely winner on Saturday.