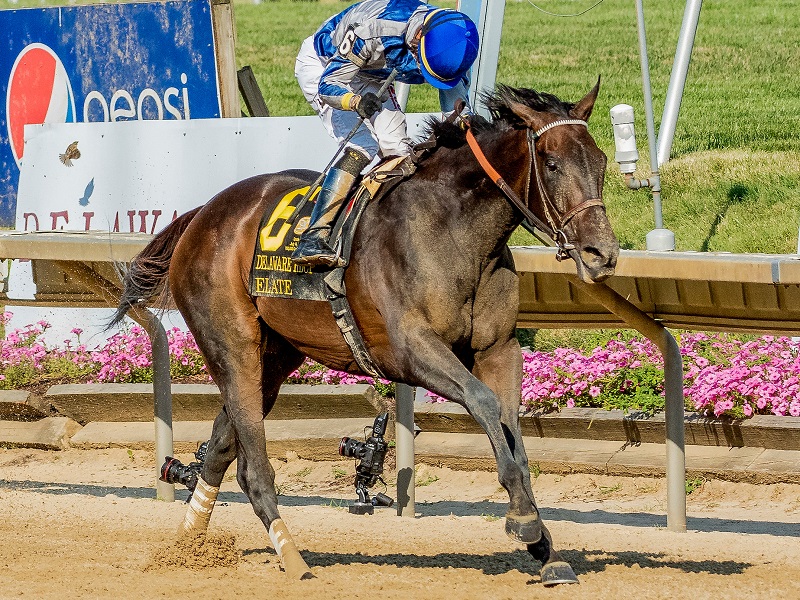 At face value, the training feat pulled off by Bill Mott to win Saturday’s Grade 2 Delaware Handicap with Elate should be revered among the game’s best. The 1-1/4 miles trek after a layoff of more than 250 days once would have been considered nearly impossible. But not only did Elate succeed, she thrived.

The 4-year-old filly blew away Grade 1 Apple Blossom winner Unbridled Mo, Grade 2 winner Mopotism and Grade 3 winner Teresa Z by more than 3 lengths while never in doubt. The final quarter in :26.00 flat indicates that no one was really offering much in that fifth and decisive frame, but if that’s the only time Elate got a bit tired, she more than earned that right.

Searching the Betmix database, I could find only one other horse in the last five years to win a 1-1/4 miles race on dirt while away more than 8 months. That was Cupid in the 2017 Gold Cup at Santa Anita for Bob Baffert. Granted, we don’t get many 1-1/4 miles dirt races, period. But just because the depth of data doesn’t exist for this accomplishment, it should not make it any less appreciated. Commonsense tells you that athletes aren’t supposed to win at extended efforts without preparation.

Of course, layoffs and horse racing have become so commonplace that commonsense has gone the way of a $3 Daily Racing Form. The pre-race punters talked about how Elate would no doubt be ready because she’s trained by Hall of Famer Bill Mott. The 1-1/4 miles would not be any issue whatsoever. The public agreed wholeheartedly at 3-5. Commonsense be damned.

When Da Hoss won his second Breeders’ Cup Mile with one prep race in two years between starts at 11-1 odds, legendary racecaller Tom Durkin exclaimed it was “the greatest comeback since Lazarus!” But that was 1998 and two decades have passed. So, too, has appreciation for the comeback. Today’s racecaller may not quite make that same historical connection in time expanse. And, if Michael Dickinson pulled that feat today, “Mad Genius” may not be his nickname. He would have gotten a few pats on the back of his sports coat and we’d be on to the next race.

Typical layoffs for good horses span about two months. You don’t even start to get nervous until the four or five-month mark. Now we’ve become so tone-deaf to time away that even eight months created no worry in a place that should have been fraught with angst. Instead, we got an easy come, easy go victory by Elate that makes you wonder just how good she can be in 2018.

It also makes me wonder two more things: What exactly are horses and horsemen doing in their time away now that they weren’t doing years ago; and are we supposed to think that the trainers of yesteryear were foolishly over-racing their horses when you simply can just show up at any distance at any level like time stands still?

Of course, the response to both of those facetious questions is meant to stir the pot. I’m a skeptic of modern training that laughs at the common convention of exercise. Football players who skip training camp and preseason games don’t come out at Pro Bowl form. You wouldn’t make your first road race the Boston Marathon without a few local 5Ks for tune-ups.

Back in the 1990s, Mott himself would not have even gone this route. His star turfer Paradise Creek used allowance races as comeback spots. Cigar never ran 1-1/4 miles near the front of his form cycle without a 1-1/8 miles race before it. But those were days gone by.

It’s almost laughable in the wake of Elate’s 10-furlong Grade 2 DelCap buzzsaw to think that Shug McGaughey was silly enough to waste Easy Goer in not one, but two 7-furlong comeback races to open his 1989 and 1990 campaigns.

Or, maybe something else has changed. You’re a cynic if you think that. But I, too, carry a card for that club.