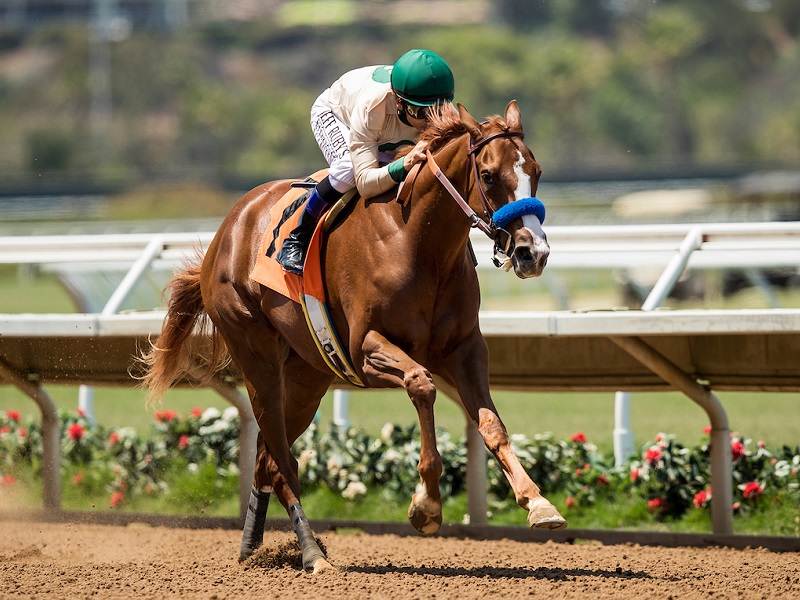 I’ve been closely following the 2-year-olds at Saratoga and Del Mar through the first two weeks of each meet and there have been no shortage of impressive performances. The premier summer tracks have been active with juvenile heats so far with 29 events held. Let’s take an early gauge on the best we’ve seen so far.

As it turns out, we’ve had 4 notable efforts surface from the fillies as well as the colts. The fillies have been more impressive at Del Mar, while the colts have had more depth to display at Saratoga. We will keep tabs on if that continues throughout the two meets. But if you’re looking at future bets for the Breeders’ Cup right this moment, think east for the Juvenile and west for the Juvenile Fillies.

Brill: Opening day July 18 Del Mar dirt sprint winner for Jerry Hollendorfer. The daughter of Medaglia d’Oro was no secret as a $1 million sales buy and 7-10 shot on the tote. She got a good education after some trouble at the start of the 5-furlong dash, which will help advance her right to the graded stakes ranks.

Mother Mother: Romping winner at 3-5 odds to wrap opening week at Del Mar on July 22, she scored on the front end in pure Bob Baffert style while debuting over 6 furlongs. The daughter of Pioneerof The Nile is out of Mother, a mare Baffert also trained, so he’s as familiar with this pedigree as possible. Mama was a sprinter, so we’ll see how far this $450,000 purchase will go beyond the 7 furlongs of the Del Mar Debutante.

Chasing Yesterday (pictured): American Pharoah’s half-sister debuted July 28 with a rousing victory at 3-10 odds for Bob Baffert. She drew away by 4-1/4 lengths as the daughter of Tapit pressed, pounced and did it easily over 5-1/2 furlongs. The home-bred for Summerwind Equine is making the blue hen mare Littleprincessemma continue to shine. In addition to the Triple Crown champ, she also produced Del Mar maiden breakers American Cleopatra and St. Patrick’s Day.

Catherinethegreat: Trainer Mark Casse’s Schuylerville Stakes winner on July 20 at Saratoga set a high bar for this division on the meet’s first day. She handled a tough rail draw in a big field of 10 and bolstered her stock from Gulfstream Park with a cruising, 4-1/4 length victory. By Uncaptured, the question will become if she’s a win-early sort, or if she will develop toward the routes to come in the division.

Rowayton: The $320,000 son of Into Mischief debuted a sharp winner at Del Mar July 21 when holding at bay promising Jerry Hollendorfer stablemate Dueling. The 4-5 favorite took heat throughout and proved best over 5 furlongs and would appear a perfect fit for the 7-furlong Del Mar Futurity at season’s end. Two turns in the fall will be the question.

Roadster: Bob Baffert’s big colt was no secret before his debut July 29 at Del Mar. And he didn’t disappoint over 6 furlongs, winning by 4-1/4 lengths while totally in hand. The 4-5 chalk beat a promising cast in a modest 1:11.07 on the clock but over a track not eliciting fast times. This $525,000 son of Quality Road appears to have a big future.

Nitrous: Winchell and Stonestreet home-bred flashed brilliance at Churchill, but put it all together in his second start at Saratoga July 21 with a 3-1/4 length score. He ran 5-1/2 furlongs in 1:03.70 and put himself directly on the graded stakes path next. Steve Asmussen has a strong crop of 2-year-olds this year and Nitrous appears best of those in the early returns.

Sombeyay: Todd Pletcher’s Sanford Stakes winner, like Catherinethegreat in the filly ranks, already has 3 starts under his belt. Will this Into Mischief colt be proven to be a win-early sort or truly a classic type to watch next year? He beat a diverse cast of regional players in the Sanford in a solid 1:10.35 for 6 furlongs, so we’ll let his performances do the talking for now.