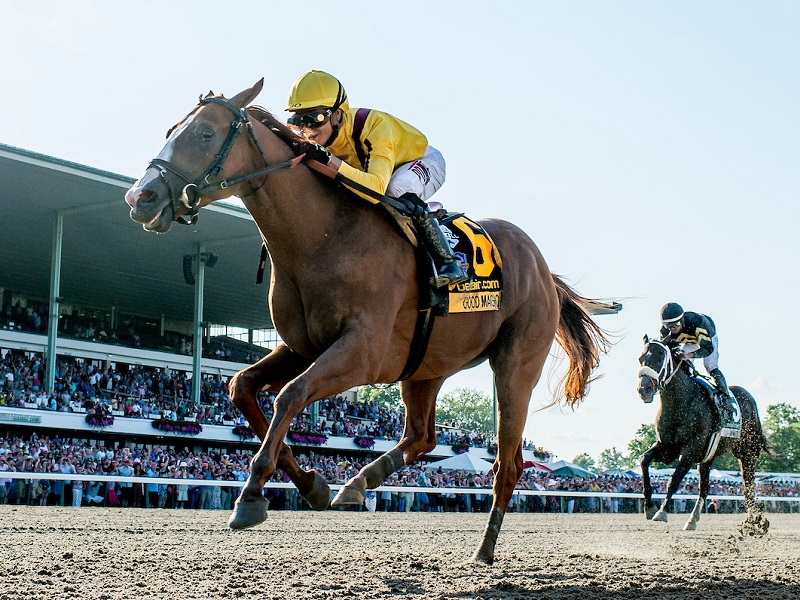 Serving notice that he will have to be dealt with during the second half of 2018, Good Magic proved a punctual 1-2 favorite in last Sunday’s $1 million Haskell Invitational at Monmouth Park.

According to Bob Baffert, following Justify’s 1 3/4-length victory in the Grade I Belmont Stakes on June 9, the Hall of Fame trainer had wanted to run undefeated Triple Crown winner Justify in the Haskell. The Haskell is a race Baffert has won a record eight times. But a start in the 2018 Haskell was not to be for Justify.

Instead of running in Sunday’s Haskell, Justify was paraded between races last Saturday at Del Mar. It had been announced earlier in the week that the Kentucky-bred Scat Daddy colt would race no more. An issue with Justify’s left front ankle had forced him out of training. As the days continued with Justify unable to resume training, it became evident to his connections that running him in the Grade I Breeders’ Cup Classic at Churchill Downs on Nov. 3 would not be in the cards.

Without Justify in the Haskell, many looked at it as a race Good Magic should win, which he did so convincingly.

Good Magic sat just off 45-1 longshot Roaming Union while that rival set the early pace (:23.15, :46.83, 1:11.48). Good Magic advanced readily to take command on the far turn with relative ease. He quickly drew well clear to boast a four-length lead with a furlong to go and went on to prevail by three lengths while leaving six foes in his wake. Bravazo finished second at 5-1, while Lone Sailor ended up third, also at 5-1.

Trained by Chad Brown and ridden by Jose Ortiz, Good Magic completed his 1 1/8-mile journey in 1:50.01. The Kentucky-bred Curlin colt received a 98 Beyer Speed Figure for his Haskell performance.

Here are the Beyer Speed Figures recorded by Haskell winners going back to 1991:

By winning the Haskell, Good Magic did something his sire was not able to do. Curlin finished third as a 4-5 favorite behind Any Given Saturday and Hard Spun in the 2007 Haskell. Curlin would go on to be voted Horse of the Year in both 2007 and 2008.

Good Magic was voted a 2017 Eclipse Award as champion 2-year-old male. He made history last year by becoming the first maiden to win the Grade I Breeders’ Cup Juvenile.

I’ll say it again that if it had not been for Justify, I think Good Magic might well have won the Kentucky Derby and Preakness to put him in a position to try for a Triple Crown sweep in the Belmont. Good Magic lost the Derby by 2 1/2 lengths when the runner-up to Justify. Good Magic lost the Preakness by an even smaller margin when fourth behind Justify, Bravazo and Tenfold.

Two factors quite possibly contributed to Good Magic finishing worse than second in the Preakness. He attacked Justify early, with the two staging a prolonged duel until Good Magic finally weakened slightly in deep stretch. Good Magic also might have weakened a bit late because he was being asked to race again just two weeks after the Kentucky Derby.

To Justify’s credit, horses he had beaten earlier this year, such as Good Magic, did well last week.

Tenfold won last Saturday’s Grade II Jim Dandy Stakes by three-quarters of a length (93 Beyer Speed Figure) at Saratoga after being unable to beat Justify in the Kentucky Derby and Preakness.

Hofburg won last Friday’s Curlin Stakes by five lengths on a sloppy track (100 Beyer Speed Figure) at Saratoga after being unable to beat Justify in the Kentucky Derby and Belmont.

Promises Fullfilled won last Saturday’s Grade III Amsterdam Stakes by 3 1/4 lengths (108 Beyer Speed Figure) at Saratoga after being no match for Justify in the Kentucky Derby.

Additionally, earlier this year, Core Beliefs on June 28 won the Grade III Ohio Derby by a nose (94 Beyer Speed Figure) at Thistledown after being no match for Justify in the Grade I Santa Anita Derby.

In the lead-up to the May 5 Kentucky Derby, many opined that this is an outstanding crop of 3-year-old males. However, I’ve been hearing some say lately that they are beginning to think this crop is not so good. Some are saying they don’t think Justify really beat much.

I am still of the opinion that this is a strong 3-year-old male crop. Don’t forget it also includes the likes of McKinzie, Gronkowski, Audible and Bolt d’Oro.

Baffert has said many times that early this year he felt that McKinzie was good enough to win the Kentucky Derby. The Kentucky-bred Street Sense colt now is back in training after an injury. Baffert has said he is hoping to run McKinzie in the Grade I, $1 million Pennsylvania Derby at Parx on Sept. 22, though “it will be tight” to make that race, Baffert added.

Gronkowski, who like Good Magic is trained by Chad Brown, ran a huge race in defeat when he finished second to Justify in the Belmont. Trailing by 14 lengths early after a tardy start, Gronkowski rallied strongly to lose by only 1 3/4 lengths while recording a 99 Beyer Speed Figure.

After the Belmont, Gronkowski missed some training due to what Brown characterized as a minor issue. Gronkowski, a Kentucky-bred Lonhro colt, worked five furlongs last Sunday at Saratoga in company with multiple Grade III winner Timeline, a 4-year-old Kentucky-bred Hard Spun colt. According to Equibase, Gronkowski was timed in 1:00.55, while Timeline was clocked in 1:00.59.

“Gronk’s now put himself very much on schedule for the Travers if he doesn’t have any [more] setbacks,” Brown said to Daily Racing Form’s David Grening. “I thought his work today was particularly good. He just looked very fit and strong. I missed some time. I was curious to see how he would respond. I put a serious work in him, and he doesn’t look like he’s lost any fitness at all with that little setback I had with him.”

Though they both currently are on the shelf, Grade I Florida Derby winner Audible, who finished third in the Kentucky Derby, and multiple Grade I winner Bolt d’Oro both add quality to this 3-year-old male crop that now finds itself being derided by some.

I concede that this 3-year-old crop probably is not as strong as people were proclaiming it to be prior to the Kentucky Derby. But I also think it is a lot better than those who now are denouncing it as crummy.

Following Good Magic’s Haskell victory, he has become the 4-1 favorite in BC Classic odds listed Monday at the Wynn in Las Vegas. These are the horses at 30-1 or lower:

MOTT YET AGAIN WINS A RACE ON HIS BIRTHDAY

Hall of Fame trainer Bill Mott has a remarkable record in terms of victories on his birthday. When he turned 65 last Sunday, Mott sent out two winners at Saratoga. He won the third race with Glossy ($5.10) and fifth with Length ($28.40).

Mott now has won at least one race at Saratoga on his birthday in 17 of the last 24 years.

Backed down to even-money favoritism, Sippin Fire won the biggest race for 3-year-olds in the Pacific Northwest, the $50,000 Muckleshoot Derby, last Sunday at Emerald Downs.

The 1 1/8-mile Muckleshoot Derby proved to be quite entertaining. It boiled down to a fierce two-horse stretch battle between Sippin Fire and Weekend Wizard.

Sippin Fire, adroitly ridden by Rocco Bowen, won by three-quarters of a length in 1:48.54. Weekend Wizard, the 9-5 second choice in the wagering, had to settle for second while finishing far in front of the rest. Elliott Bay ended up third, 9 3/4 lengths behind Weekend Wizard.

Speaking of Washington-breds, the Quarter Horse Heza Dasha Fire took the Grade I Spencer L. Childers California Breeders Championship Handicap at Los Alamitos last Saturday night. He won the 400-yard dash by three-quarters of a length as the 3-5 favorite.

Heza Dasha Fire has won 16 of 22 lifetime starts while earning $2,217,987. The 6-year-old First Down Dash gelding is the richest Washington-bred of all time.

Saratoga Passage is a member of the Washington Thoroughbred Racing Hall of Fame, along with such other accomplished Washington-breds as Chinook Pass, Turbulator and Trooper Seven.

As a 3-year-old in 1982, Chinook Pass won a five-furlong sprint at Longacres in :55.20, which remains the fastest time ever recorded for this distance on the dirt. Chinook Pass was voted an Eclipse Award in 1983 as champion sprinter.

During Turbulator’s racing career, in which he became the most popular horse to ever race in the Northwest, he broke the world record for 6 1/2 furlongs in 1970.

Trooper Seven, who also was a fan favorite in that region of the country, tied the world mark for 6 1/2 furlongs in 1980.