Harness Highlights: Atlanta Shows the Boys Her Heels in Hambletonian 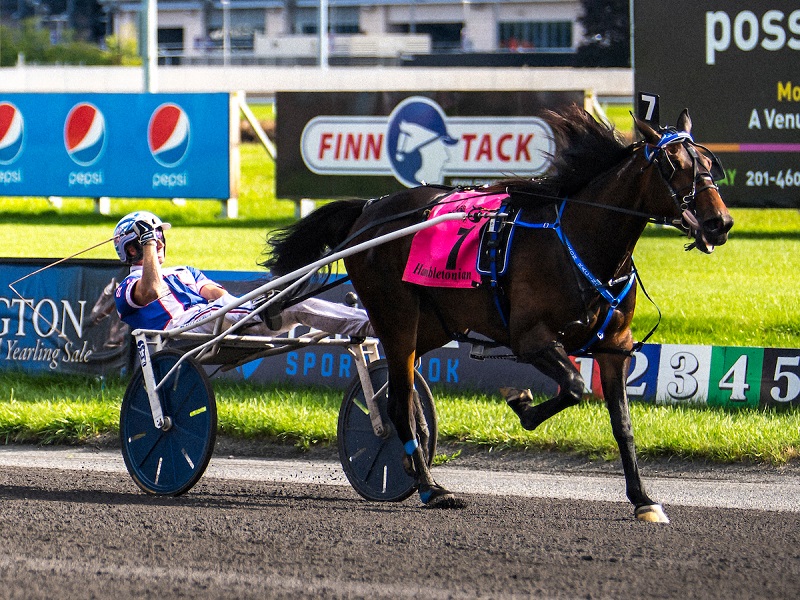 Atlanta burned alot of fuel in the Hambletonian qualifying heat Saturday, but the 3-year-old filly still had something left in the tank for the $1 million final of the trotting classic.

Atlanta blew a 4-1/2-length lead in the elimination after a taxing :53.2 half mile split, but she held second and earned 2-to-1 betting attention in the final against the boys.

Driver Scott Zeron made no mistakes in the final, controlling the pace through a 55 half and never looking back to win by a length in 1:50.4. Classic Fashion (Tim Tetrick), the 9-to-5 favorite who caught Atlanta in the prelim, ranged up off cover for the stretch run but failed to sustain his bid. Met's Hall (Andy Miller) rallied in mid-track to finish second at 29-1 and Tactical Landing (Jimmy Takter) got up inside of Classic Fashion for third.

"She just got away from me (in the elimination heat)," said Zeron. "I just said to myself, 'If she's a champion, she'll bounce back.'"

Atlanta is not only a champion, she is the fourth filly in 93 runnings of the Hambletonian and first since 1996 to win. She is trained by Rick Zeron, Scott's father, and owned by Crawford Farms, Holland Racing Stable, Howard Taylor and Bradley Grant.

Her task was made easier when Six Pack and Wolfgang -- division winners in the prior week's Stanley Dancer Memorial -- failed to finish in the top five in their respective prelims and qualify for the finals. Six Pack had a nightmarish trip and locked wheels with a rival in deep stretch, negating any chance at a Hambletonian repeat for trainer-driver Ake Svanstedt, who won with Perfect Spirit in 2017.

Zeron drove three stakes winners on the 16-race card, but he shared the spotlight with Yannick Gingras, who piloted three stakes-record setters. A stakes recap follows:

$500,000 HAMBLETONIAN OAKS: Manchego and Phaetosive lived up to their odds-on, elimination victories, but Manchego went to the head of the 3-year-old fillies class with a stakes-record win in 1:50, giving Gingras and Hall of Fame trainer Jimmy Takter their fifth consecutive Oaks champion. Plunge Blue Chip (Ake Svanstedt) pulled from the pocket on the turn and drew alongside Manchego heading into the stretch. Phaetosive (Trond Smedshammer) sat poised to bid from third but simply couldn't reach the one-length winner. "I was hoping for exactly this ... I got an easy front," said Gingras. "I knew (Plunge Blue Chip) would come (out of the pocket). I wanted to force his hand. Even if I had to go a little faster, I could have."

$422,350 PETER HAUGHTON MEMORIAL: Don't Letem ($8, Gingras) seized the moment when 3-to-5 favorite Greenshoe broke stride shortly after the start of the 2-year-old trot. He made a quarter move to the lead and never looked back in a stakes-record 1:51.4, more than 3 lengths clear of runner-up Green Manalishi S (David Miller).

$357,450 JAMES DOHERTY MEMORIAL: The Ice Dutchess ($12.80, Johnny Takter) tracked stable-mate Beautiful Sin (Gingras) in the pocket, slipped through on the inside to lead in mid-stretch and held on to win by a neck in 1:53.4, giving Jimmy Takter his third consecutive win in the race for 2-year-old filly trotters.

$288,650 JOHN CASHMAN MEMORIAL: Marion Marauder ($10.40, Zeron), the richest Trotting Triple Crown winner ever, surged late to win in a 2:06 thriller at 1-1/8 miles. Marion Marauder yielded to the pocket when reigning Horse of the Year Hannelore Hanover (Gingras) blasted to the lead from post 12 (second tier) on the backstretch. He sat patient when Will Take Charge (Tetrick) bid from second-over and drew even with Hannelore Hanover for the stretch drive, then angled 3-wide in mid-stretch and out-kicked Will Take Charge by a head.

$260,100 SAM McKEE MEMORIAL: Western Joe ($7.60, Zeron) foiled Mcwicked's bid to become a $3 million earner with a powerful mid-track rally to win going away in 2:02. Mcwicked (Brian Sears) worked out a good trip from the second tier, following live cover to the stretch and taking the lead 3-wide. But Western Joe, who lacked room turning for home, swung off the rail in mid-stretch and found a clear path to win going away by 1-1/4 lengths.

$96,600 SHADY DAISY: Youraremycandygirl ($5.40, Gingras) led all the way in a stakes-record 1:48.2. The 3-year-old filly pacer won by a nose and avenged three recent stakes losses against odds-on favorite Kissin In The Sand (Zeron), who pulled the pocket on the turn to set up the stretch battle.