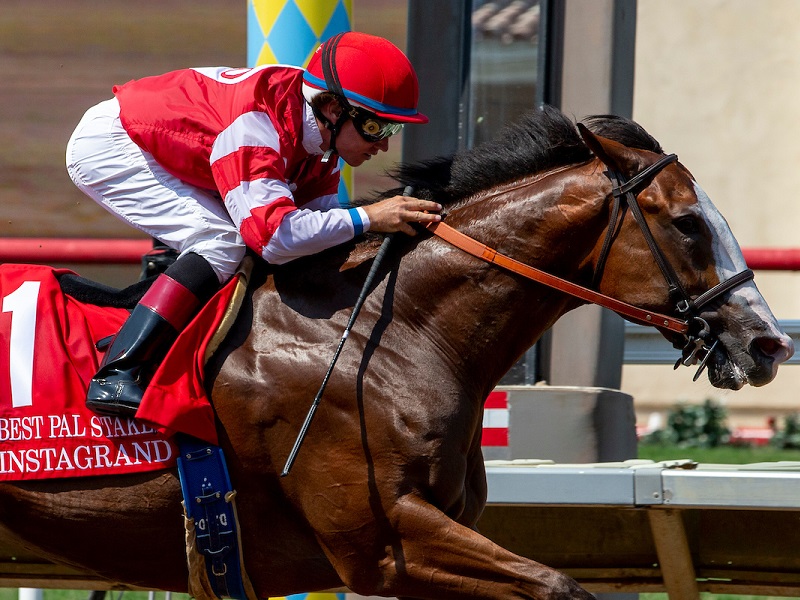 Hall of Fame trainer Jerry Hollendorfer sent out Kentucky Derby starters in 2017 and 2018 who both outran their odds.

In 2017, Hollendorfer was represented by 40-1 Battle of Midway, who finished third behind Always Dreaming and Lookin At Lee.

In 2018, Hollendorfer-trained Instilled Regard, virtually ignored in the wagering at 85-1, finished fourth behind Justify, Good Magic and Audible.

Considering how Instagrand has made a mockery of his foes in his two starts thus far, it is not far-fetched to envision him running for the roses next year. If the exciting 2-year-old does indeed start in the 2019 Kentucky Derby for Hollendorfer, you can bet that the colt’s odds will not be anywhere close to 85-1 or 40-1.

Instagrand won a five-furlong maiden special weight race with ridiculous ease by 10 lengths as a 2-5 favorite at Los Alamitos on June 29 in his career debut. He received an 88 Beyer Speed Figure.

Last Saturday, Del Mar presented the Grade II Best Pal Stakes. The six-furlong race pays tribute to the popular California-bred gelding of the 1990s who earned $5,668,245 and the admiration of a great many racing fans. Keep in mind Best Pal managed to earn that sum of money despite not winning a Triple Crown race, a Breeders’ Cup race, a Dubai World Cup or a Pegasus World Cup. Best Pal did finish second to Strike the Gold in the 1991 Kentucky Derby. Later in 1991, Best Pal won Del Mar’s inaugural Pacific Classic. He was inducted into the Hall of Fame in 2010.

Instagrand broke from the inside post in the Best Pal. When a couple of rivals – Mason Dixon and Synthesis -- delayed the race by not wanting to go into the starting gate, Instagrand had to stand in the gate longer than Hollendorfer would have preferred, especially since Instagrand didn’t exactly blast out of the gate in his debut at Los Al.

But Instagrand did come away alertly in the Best Pal. He vied for the early lead with Owning through fractions of :23.00 for the quarter and :46.54 for the half. Instagrand then drew away to again win by a big margin, this time by 10 1/4 lengths. Sparky Ville finished second at 14-1 in the field of five, while Synthesis ended up third at 19-1. After 7-1 Owning vied for the early advantage, he faltered and finished fourth, 13 1/2 lengths behind Instagrand.

“Don’t even ask me if I could see the winner,” Stevens quipped.

Stevens’ remark was similar to what Ray Sibille said after he rode Bold Out Line when she finished a distant second to Landaluce in the six-furlong Hollywood Lassie Stakes at Hollywood Park in 1982. Landaluce won by an astounding 21 lengths. Sibille joked that he thought he had won the race because he couldn’t see anyone in front of him.

After stepping five furlongs in :58.17, Instagrand cruised home and completed six furlongs in 1:10.27 as an overwhelming 1-10 favorite. He recorded a 92 Beyer, which is the top figure by a 2-year-old male so far in 2018. The next-best Beyer in this category is Mucho’s 90 in his 9 3/4-length maiden special weight win at Saratoga on Aug. 4.

This year’s highest Beyer to date by a 2-year-old filly is Bellafina’s 94 in her 4 1/4-length win in Del Mar’s Grade II Sorrento Stakes at six furlongs on Aug. 5.

Drayden Van Dyke has been aboard Instagrand in both of his dazzling victories. The Kentucky-bred Into Mischief colt, a $1.2 million auction purchase, is owned by Larry Best, who races as OXO Equine.

Next for Instagrand, according to Hollendorfer, is the Grade I Del Mar Futurity at seven furlongs on Sept. 3, closing day of the track’s summer meeting. Also eyeing that race is Roadster, the highly regarded colt who resides in Hall of Fame trainer Bob Baffert’s barn. A Kentucky-bred Quality Road colt, Roadster registered an impressive 4 1/4-length debut win in a six-furlong maiden special weight race at Del Mar on July 29 (81 Beyer).

After American Pharoah won the Del Mar Futurity and was voted an Eclipse Award as champion 2-year-old male, he would go on to sweep the Triple Crown in 2015.

Hollendorfer has won the Del Mar Futurity once (Tamarando in 2013).

Not only are Instagrand and Roadster scheduled to clash in this year’s Del Mar Futurity, both also no doubt are candidates for the Grade I Breeders’ Cup Juvenile at 1 1/16 miles at Churchill Downs in early November. And don’t be surprised if Instagrand and Roadster are back in action at that same Louisville track on the first Saturday in May next year.

Eight are entered in this Saturday’s $1 million Pacific Classic at Del Mar. The 8-5 morning-line favorite in the Grade I event is Accelerate, winner of this year’s Grade I Santa Anita Handicap and Grade I Gold Cup at Santa Anita.

But after Pavel’s defeat in the Gold Cup, he put it all together and won the Grade I Stephen Foster Handicap by 3 3/4 lengths at Churchill Downs on June 16. I’m going with Pavel to win the Pacific Classic because (a) I think he might have turned the corner and (b) his price this Saturday will be better than Accelerate’s. Doug O’Neill trains Pavel.

The Lieutenant (6-1) is a half-brother to Triple Crown winner Justify. A son of Street Sense, The Lieutenant is coming off a second in the Grade II Suburban at Belmont Park when dismissed at 34-1 on July 7. Diversify won the Suburban, then also took the Grade I Whitney at Saratoga on Aug. 4.

Conditioned by Michael McCarthy, The Lieutenant won the Grade III All American on a synthetic surface May 28 at Golden Gate. Earlier this year, he ran seventh behind Accelerate and Pavel in the aforementioned San Pasqual.

Roman Rosso is the wild card. He makes his United States debut after winning five of eight starts in Argentina, including three Group I races. He is a son of Roman Ruler. Baffert trained Roman Ruler, who won the Grade I Haskell Invitational at Monmouth Park in 2005.

HUGE DAY FOR BROWN AT ARLINGTON

Chad Brown, voted Eclipse Awards in 2016 and 2017 as outstanding trainer, put on quite a show at Arlington Park last Saturday.

Sistercharlie won the 1 3/16-mile grass affair by a half-length in 1:56.77 with Hall of Fame rider John Velazquez aboard. The 4-year-old Irish-bred Myboycharlie filly was assigned a 102 Beyer Speed Figure for her Beverly D. win.

This was Brown’s fourth straight Beverly D. victory. He has won it a record five times. Brown won the Beverly D. with Stacelita in 2011, Watsdachances in 2015, Sea Calisi in 2016 and Dacita in 2017 prior to this year.

This was Brown’s third win in the Million, tying the record held by Hall of Famers Ron McAnally and Charlie Whittingham.

Whittingham’s Million victories came with Perrault in 1982, Estrapade in 1986 and Golden Pheasant in 1990.

Brown won the Million with Real Solution in 2013 and Beach Patrol in 2017 prior to this year.

The biggest disappointment in this year’s Million was 9-5 favorite Oscar Performance, who was pulled up near the finish, then vanned off. His rider, Jose Ortiz, said that he felt the 4-year-old colt take a couple of bad steps. Ortiz said he pulled him up out of an abundance of caution.

“No lameness, no swelling or anything like that,” Lynch was quoted as saying in Sunday’s Arlington Park barn notes. “He wasn’t a bit off anywhere.”

Lynch went on to say that Oscar Performance was sent to the Rood and Riddle clinic in Kentucky “to have Dr. Larry Bramlage take a look at him.”

BELVOIR GETS ANOTHER LONGACRES MILE WIN

Back in the 1970s, Howard Belvoir trained Red Eye Express, a fan favorite at Longacres near Seattle.

With Longacres long gone, the Longacres Mile has been run at Emerald Downs since 1996. Trainer Blaine Wright recently articulated how much winning this race means in that part of the country.

Wright was hoping to get his first Longacres Mile this year with millionaire Alert Bay, the 9-5 favorite, or 8-1 Oh Marvelous Me. But they finished second and third, respectively, while Belvoir won the race with 5-2 second favorite Barkley.

Barkley, ridden by Javier Matias, prevailed by 1 1/2 lengths. It was Belvoir’s third Longacres Mile triumph. The trainer previously had won the race in 2008 with 10-1 Wasserman, then again in 2009 with 7-1 Assessment.

Belvoir was so thrilled to win a third Longacres Mile that he said after the race that he “might need a parachute to get down.”

Not only is Belvoir now a three-time winner of the race, he has sired a Longacres Mile-winning trainer. Vann Belvoir won the 2017 edition with Gold Rush Dancer, becoming the first person to both trainer and ride a Longacres Mile winner. Vann was the winning rider in 1994 on Want a Winner.

My pick to win the Longacres Mile was Conquest Windycity. I thought he might get a dream trip racing just off the expected pacesetter, Kaabraaj. I felt that Conquest Windycity might find these rivals to his liking after beating Mind Your Biscuits at Gulfstream Park in February and later facing the likes of Limousine Liberal, Warrior’s Club and Awesome Slew in Kentucky.

But a stalking trip for Conquest Windycity in the Longacres Mile went down the drain when he did not break well and stumbled shortly after the start. He found himself trailing through the early stages instead of sitting just off the pace. Conquest Windycity never threatened and finished last in the field of six at 5-1.

Conquest Windycity landed at Seattle-Tacoma International Airport from Kentucky not long before a stunt by Richard Russell made national headlines. Russell stole an empty airplane valued in the neighborhood of $32 million Friday evening at Sea-Tac. After Russell reportedly cut off a Delta jet that was taxiing, he took off in an empty Horizon Air turboprop passenger plane that seats 76 and proceeded to go on a joyride in the sky above Puget Sound that lasted for about 75 minutes. After Russell conducted barrel rolls and conversed with air traffic controllers, the plane crashed on an island in Puget Sound. Russell, 29, was killed in the crash.

Not long after Conquest Windycity landed at Sea-Tac for the Longacres Mile, the airport was closed. The Los Angeles Times reported that Michael Ehl, Sea-Tac’s director of operations, said 75 flights were delayed, nine flights were diverted to other airports and five flights were canceled due to the incident.

As for Barkley, he did not have to travel in order to compete in the Longacres Mile. He makes his summer home at Emerald Downs. In fact, Barkley has never raced anywhere else. All 17 of his career starts have come at Emerald, where he has won nine times. Barkley now joins Washington Racing Hall of Famer Noosa Beach as the only horses in Emerald’s history to win stakes races at ages 2, 3, 4 and 5.

Sistercharlie moved into the Top 10 this week after taking the Beverly D. She now is a three-time Grade I winner in 2018.