Look Beyond the Names Next to Classic Favorites 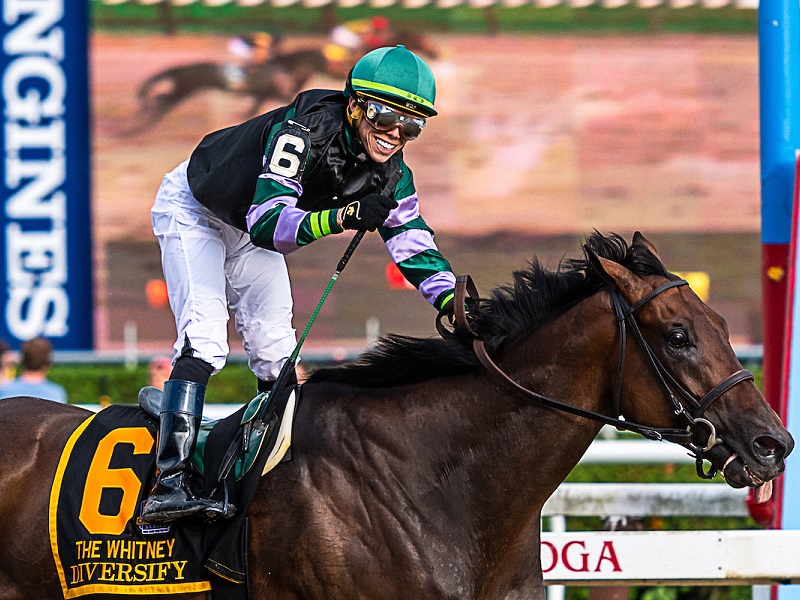 Put Diversify in Chad Brown’s barn and Accelerate with Bob Baffert, and no one wants a part of the 2018 Breeders’ Cup Classic division. Swap the personas to Rick Violette and John Sadler, and Pandora’s box has opened up. Even the ever-close-to-the-vest Bill Mott now has the mare Elate and turfer Yoshida barking at Classic possibilities, crossing over categorical lines at an apparently wide-open division.

The only thing wide open about the division, however, is the trainers’ names in the program.

Diversify has won 10 of 15 for just under $2 million and netted the Jockey Club Gold Cup, Suburban and Whitney over the past year. Accelerate, earner of $2.3 million, has been near-perfect this year with wins in the Santa Anita Handicap, Gold Cup at Santa Anita and Pacific Classic. Both have found the 1-1/4 miles of the Classic distance to be among their Grade 1 successes.

If you don’t want to insult Rick Violette or John Sadler, you could argue that the perceived wide-openness of the Classic division is a result of Diversify and Accelerate being on the road. The Breeders’ Cup will be at Churchill Downs in Kentucky this year, not New York or California where the favorites are found. And it’s true Diversify was fourth in last year’s Clark Handicap in Louisville, and Accelerate’s only defeat this year came on the road at Oaklawn (beaten a neck by fellow So Cal’er City of Light in the Oaklawn Handicap).

But travel for the Breeders’ Cup far more often is the norm than any sort of exception. There’s no long history of home-field advantage in the Classic. Gun Runner ventured and won at Del Mar, Fort Larned at Santa Anita, Invasor at Churchill Downs, Tiznow at both Churchill and Belmont Park. Those are just in the 2000s and obvious road games.

History says we’re way more used to the Classic being won by a horse out of his region than by a turfer or distaffer. Those types range from A to Z, Arcangues to Zenyatta, but there’s nothing in-between except for Raven’s Pass. So the explanation that this year’s Classic is wide open comes full circle back to the humans involved.

Industry types respect Diversify’s trainer Rick Violette as one of their most trusted business advocates, but handicappers don’t go out of their way to move his horses up just on the barn’s reputation. The fact is, he’s never won a major – a Triple Crown or Breeders’ Cup race – coming in third in the 1995 Belmont (Citadeed) and third in the 2014 BC Juvenile (Upstart). Violette has been at this since 1977 as a licensed trainer, so it’s not like a Spring Chicken on the rise. He’s trained 3 Grade 1 winners since the year Reggie Jackson became nicknamed “Mr. October.”

As for John Sadler, he’s certainly had more national stage time than Violette, but also has failed to deliver a major. His official training career dates back to 1978, a year after Violette, and it’s been since Affirmed’s Triple Crown and Roger Staubach leading Dallas to the Super Bowl title without a major win for Sadler. Sadler’s 0-for-41 in the BC championship races represents a place in the record book no one wants to be.

In a year where Diversify clearly is the best horse in the east and Accelerate has owned the west, it will be interesting to see who shows up in middle America at Churchill Downs. The way it sounds at the moment, it will be a larger and more optimistic cast than it probably should be. You can thank Rick Violette and John Sadler for that.