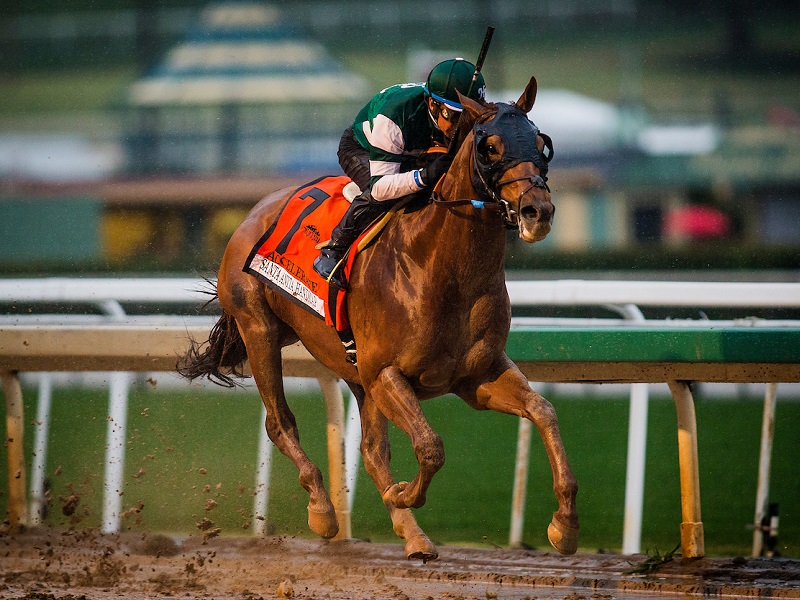 There is a new favorite at Las Vegas’ Wynn Race & Sports Book for the Grade I, $6 million Breeders’ Cup Classic at Churchill Downs on Nov. 3.

Going into last Saturday’s Grade I, $1.25 million Travers Stakes at Saratoga, Good Magic had been the Wynn’s 9-2 BC Classic favorite. However, he was a no-show last Saturday. Sent off as the 7-5 Travers favorite, Good Magic finished ninth and lost by 15 1/2 lengths.

Following Good Magic’s disappointing Travers performance, his BC Classic price at the Wynn has risen to 10-1.

Accelerate now has taken over the BC Classic favorite’s role at the Wynn. He is 5-1. Accelerate crushed his foes when he won Del Mar’s Grade I Pacific Classic by a record 12 1/2 lengths at 1 1/4 miles on Aug. 18. He also has won this year’s Grade II San Pasqual Stakes, Grade I Santa Anita Handicap and Grade I Gold Cup at Santa Anita.

When I was chatting with Race & Sports Book director John Avello at the Wynn back on Aug. 1, I mentioned to him that he might consider adding Catholic Boy to his list of BC Classic future-book horses.

Avello initially scoffed at the notion.

I could not help but conclude that Avello felt Catholic Boy did not have a prayer of winning the BC Classic.

“But you might want to go ahead and put him on your list because I think he probably is going to run in the Travers.”

That got Avello’s attention. After I said that, he did add Catholic Boy to the Wynn’s BC Classic list. The price quoted on Aug. 4 was 85-1.

As it turned out, Catholic Boy not only did run in the Travers, he registered a four-length victory at 7-1 in the wagering.

And just what price can you get now on Catholic Boy at the Wynn for the BC Classic in the wake of his Travers triumph? His odds have plummeted to 14-1.

West Coast currently is the 6-1 BC Classic second choice at the Wynn. He has not started since he finished second to Thunder Snow in the Group I, $10 million Dubai World Cup last March 31. West Coast, who also ran second to Gun Runner in the Grade I, $16 million Pegasus World Cup at Gulfstream Park in January, was timed four furlongs Tuesday in :48.80 at Del Mar in his first recorded workout since his trip to Dubai.

“Considering the way he went, it would not be surprising to see him come around quickly for a comeback race,” Daily Racing Form’s Jay Privman wrote of West Coast following his Tuesday drill.

Diversify is the only other BC Classic lower than 10-1 at the Wynn for the BC Classic. He is 7-1. Diversify won the Grade II Suburban Stakes at Belmont Park by 6 1/2 lengths on July 7, then splashed his way to a 3 1/2-length victory in Saratoga’s Grade I Whitney Stakes on a sloppy track Aug. 4.

These are the horses listed at 50-1 or lower as of Aug. 28 for the BC Classic at the Wynn:

In Belmont’s Grade III Pennine Ridge at 1 1/8 miles on the grass June 2, Catholic Boy came back on to prevail by a neck after being headed by Analyze It in the stretch.

In the Grade I Belmont Derby at 1 1/4 miles on the turf July 7, Catholic Boy again came back on to win, this time by a head, after again being headed by Analyze It in the stretch.

Catholic Boy now has six wins and a second in nine lifetime starts. His final time in the Travers was 2:01.94. The Kentucky-bred son of More Than Ready received a career-best 104 Beyer Speed Figure. His previous top was a 99 Beyer in the Belmont Derby.

By virtue of Catholic Boy’s victory in the Travers, he gained revenge on Mendelssohn.

In the Grade I BC Juvenile Turf at Del Mar last Nov. 3, Mendelssohn won by one length. Catholic Boy finished fourth, 1 1/2 lengths behind Mendelssohn.

Good Magic, who was soundly beaten by both Catholic Boy and Mendelssohn in the Travers, won the Grade I BC Juvenile on the dirt at Del Mar last Nov. 4.

Considering Catholic Boy last Saturday defeated 2017 Breeders’ Cup winners Good Magic and Mendelssohn, I wondered which was stronger, the BC Juvenile or BC Juvenile Turf.

Following Catholic Boy’s win in the Travers, he vaults into the Top 10 at No. 5 in this week’s NTRA Top Thoroughbred Poll.

Here is this week’s poll:

I was driving south Monday morning on Highway 99 in the middle of California when returning to my home near Santa Anita after spending a week working as a Steward for the California Horse Racing Board at Golden Gate Fields. Listening to Steve Byk’s radio program At The Races was helping to make the drive a bit less tedious.

Hall of Fame trainer Bob Baffert was being interviewed a little before 9 a.m. Pacific Time when Byk relayed news that John Asher had died.

Asher, who was a highly respected and amiable ambassador for both the Kentucky Derby and Churchill Downs ever since he had joined the famed Louisville track in 1997, passed away Monday morning after suffering a heart attack while on a rare vacation with his family in Florida. He was 62.

I, like countless others, am saddened by his death.

This Xpressbet.com column is something I know that Asher sometimes read. He would email me from time to time to comment on something I had written in this column.

This was the headline and first two paragraphs of my Xpressbet.com column on June 10, 2015:

THE DROUGHT IS FINALLY OVER

Bob Baffert said that if American Pharoah didn’t win the Belmont Stakes last Saturday, he was “going to take a bat to the Triple Crown trophy and destroy it.”

Don’t worry, folks. The valuable Triple Crown trophy, which had gone unclaimed for 37 excruciatingly long years, is still in one piece. Even if Baffert had not been kidding about treating it like a piñata, the Triple Crown trophy was safe after American Pharoah won last Saturday’s Belmont Stakes to become the toast of American racing by becoming the 12th horse to sweep the Triple Crown. The Pioneerof the Nile colt passed “The Test of the Champion” with owner Zayat Stable’s turquoise and gold silks flying, an emphatic 5 1/2-length triumph accomplished in yet another demonstration of poetry in motion.

After Asher read that Xpressbet.com column, he sent this brief email to me:

“Thought of you Saturday, my friend. Cheers (and a delayed cheer for your man Pioneerof the Nile)!”

Byk dedicated his entire show on Tuesday, August 27 to Asher. If you missed it, I recommend that you go to stevebyk.com and listen to it on his archives.

That should give you an idea of what a wonderful person John Asher was.