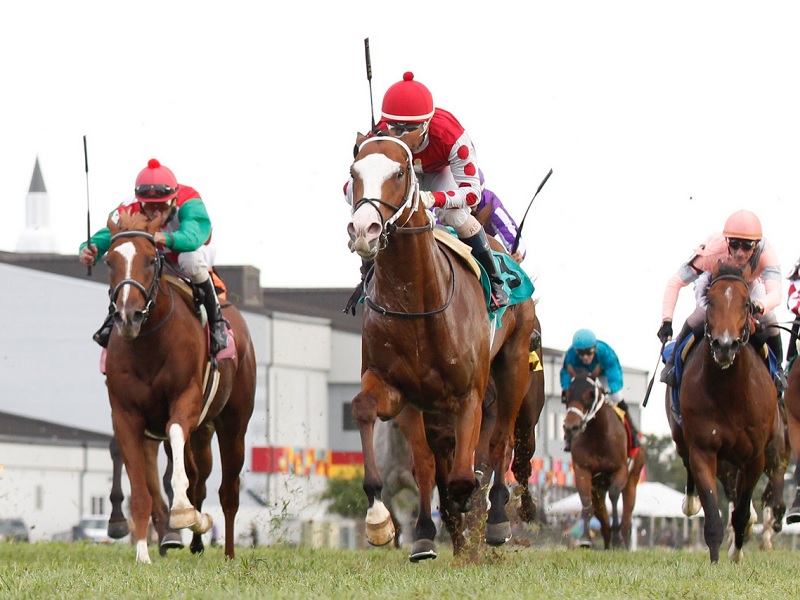 Another big Saturday in racing and this time around, the attention shifts to Kentucky Downs.

Once one of the best-kept secrets in betting, Kentucky Downs has now gone 'big time,' catching the attention of top owners, trainers, jockeys and horseplayers from around the world. Saturday's card attracted gigantic fields across each of its ten races. Plus, big names like Julien Leparoux, Florent Geroux, Drayden Van Dyke, Mike Maker, Shug McGaughey, Mark Casse, Todd Pletcher, Bill Mott and Wesley Ward are among the entrants.

Something to keep an eye on at Kentucky Downs this fall. With the Breeders' Cup in Louisville in November, the races at Kentucky Downs take on a little extra importance for handicappers. Local horses who may have otherwise bypassed the 'Cup' - due to it including a flight to California - might just stick around and take a shot. The good horses would have gone either way, but the fringe contenders will likely target the BC if they can run out of their barn. And those are the type of horses that can trigger a massive Breeders' Cup payout.

Last week I went 3-for-4 in the Woodward Day Late Pick 4 at Saratoga. Turns out, they don't pay for that! Go figure. In hindsight, I went too deep to catch Raging Bull ($6.50) in the Saranac, equally too deep to get to Yoshida ($14.40) in the Woodward and appropriately deep to get to Lady Montdore ($10.40) in the Glens Falls. Problem is, there aren't any scenarios where I'd have landed on Sippican Harbor ($34.00) in the Spinaway. Props to those who did - the Late Pick 4 paid $1,482.

Storyline: The 14% Takeout All-Stakes Late Pick 4 kicks off with the Ladies Turf Stakes and I'm curious to see if Dubara can run as well this week as she did last Saturday when she nearly won the One Dreamer Stakes. I loved her that day and still like her, but I can't help but wonder if she had her chance that time. For what it's worth, nobody here appears to be as good as On Leave, who won that race.

How I'm Betting: I'll use my top three - I'm Betty G, Storm the Hill and In the Lee aggressively - and try to get one of them home. If the winner isn't in that group, I don't know where she's going to come from.

Storyline: Lull is a perfect 2-for-2 at Kentucky Downs, having won here each of the last two seasons. Can she make it three in a row for trainer Christophe Clement? She's a true 'horse for the course' and a lot of money - mine included - will be riding on her in multi-race bets.

How I'm Betting: Key Lull over in Exactas and Trifectas over Brielle's Appeal, Con Te Partiro, Ruby Notion and Originator. You may not get rich in this race, but you can cash some tickets.

Storyline: Eight-year-old Undrafted is one of the coolest horses in North America, having won 8-of-36 career starts with a bankroll of more than $1.4 million. He's won at Royal Ascot, Churchill, Keeneland and everywhere in between. He's 0-for-4 at Kentucky Downs but he's been off the board just once here. Note that he and Conquest Panthera scratched from Thursday's Old Friends Stakes and should run here. Master Merion stayed in the Old Friends and will scratch here.

How I'm Betting: Let's look to beat Undrafted with Conquest Panthera and White Flag. I'm also skeptical of Blind Ambition on a firm course. His best race this year came on wet turf.

Storyline: Mike Maker appears intent on winning this race for the fourth year in a row, having entered five horses (four are in the main body of the field, one is on the AE list). He won back to back editions with Da Big Hoss in 2015 and 2016 and then scored last year with Oscar Nominated. With its $750,000 purse, this is one of the richest races in North America for turf marathoners. You should expect to see the top one or two finishers go on to the Breeders' Cup Turf where they're sure to be a longshot.

How I'm Betting: I slightly favor Oscar Nominated, so I'm going to use him on top. A host of horses can run 2nd or 3rd, so you may be better off just making a Win bet or wheeling him over the ALL button.