The Five Races I Can’t Wait to Bet this Saturday 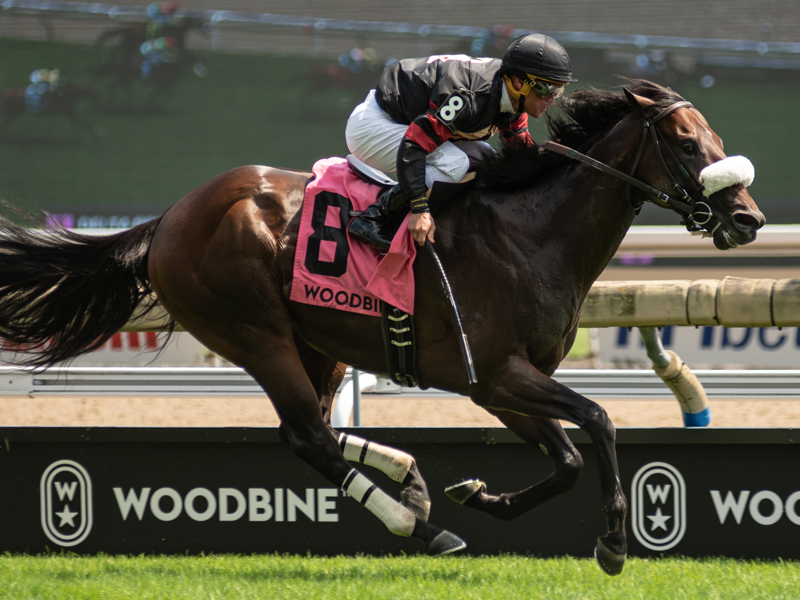 Saratoga and Del Mar are in the books, and so is Kentucky Downs, Monmouth and a few other of our summertime favorites.  But hey, it happens.  They’ll be back.  And in the meantime, it’s up to the rest of the tracks to pick up the slack.

Woodbine does a great job of that this Saturday as they feature a plethora of graded stakes races, including the G1 Ricoh Woodbine Mile.  They have $550K in guaranteed wagers this Saturday, including $200K each for the Late Pick 5 (Races 7 – 11) and Late Pick 4 (Races 8 – 11).  Plus, they’ve got a massive mandatory payout of their 20-cent Jackpot Hi-5, which goes with Race 12.  The carryover there is well over $600K!

Plus, for harness fans, Xpressbet is proud to sponsor Running Aces’ Night of Champions this Saturday night.  In addition to $350K in purses, they’ve also got a mandatory payout in their 20-cent Jackpot Pick 5.  The carryover into Saturday is $39K.

Here are my five best betting races and picks:

Analysis: This year’s Ricoh Woodbine Mile is as good as any of them, with loads of top-end talent and potential combined with intriguing European imports.  Betting this race won’t be a breeze, however.

The tepid 5/2 ML favorite is DELTA PRINCE, but he isn’t without his warts.  He’s just 4-for-9 in his career and has only won a single stakes race.  Second choice OSCAR PERFORMANCE (7/2) was pulled up in the Arlington Million and he’s won just once in his last four starts.  And third choice, LORD GLITTERS (4/1), comes in from the UK where he has never won beyond the Group 3 level.  Any of them could win this, but it’s safe to say the others are just as intriguing.

With questions surrounding the ‘big’ horses, you can’t help but wonder if a longshot like MR HAVERCAMP (6/1), who is 4-for-4 locally, or GOOD SAMARITAN (10/1), who gets back to the turf, aren’t worth betting.  Another European import, STORMY ANTARCTIC is 8/1 on the ML and has been in excellent form this year.

Strategy:  On paper, Delta Prince is the best horse and he showed affinity for the local lawn with his win in the Grade 2 King Edward here on June 30, getting this distance in a fast 1:32 1/5.  If he can replicate that effort, he should win.  Problem is, the pace dynamic looks tepid and that should ultimately favor Oscar Performance the most.  He should get a great trip stalking La Sardine and his track-record win in the Grade 3 Poker Stakes at Belmont in June going this distance was the best race of his career.

Analysis: With Daring Duchess (4/1), Niigon’s Eclipse (8/1) and Starship Jubilee (10/1) signed on, it’s hard to envision a frontrunner getting brave and stealing this race from gate-to-wire.  They should be moving up front and that will set this race up perfectly for the Chad Brown-trained duo of Inflexibility and New Money Honey.  They’re the top two choices in the betting, but as a bettor, sometimes I don’t mind races like that.

Inflexibility loves the Woodbine turf course (3-2-1-0) in her career and New Money Honey was a Breeders’ Cup winner at two and a Grade 1 winner at three.  She hasn’t been quite as good this year, but her B-game likely puts her in the Exacta.  Daring Duchess took advantage of pedestrian fractions to win a stakes race here last out, but she won’t get to go :54 and 1:19 this time around.  It isn’t coincidence that Bletchley’s best race came over this course in the G2 Nassau on May 27 and she’s one to watch.

Strategy: You’ll never dance in the streets after races like this, but they’re perfect for padding your bankroll.  I’m going to take what they give me and hammer the Inflexibility / New Money Honey Exacta.

Analysis: With ten entrants and just three entering off a victory, the G1 Northern Dancer is loaded with longshot potential.  Just look at the two outside horses – English Illusion (15/1) and Patterson Cross (10/1).  They each earned Beyer Speed Figures in their last starts (98) that were higher than anyone else in this field has earned this year except 30/1 outsider MARKITOFF, who earned a 99 figure back in March.  That’s right, on paper, those are the three fastest North American horses in the field.

The favorite is the highly-regarded HAWKBILL (2/1), though.  He’s 10-for-23 and has earned more than $4 million in his career.  And hey, if he runs his race, he wins.  But we said that last year.  And last year, at 3/5 odds, Hawkbill got nailed by by 9/1 outsider Johnny Bear (who is also back this year) at the wire.  So anything is definitely possible.  Especially if Hawkbill falters.  He started his season well - he even won the G1 Dubai Sheema Classic – but he’s lost three in a row and hasn’t regained his top form.

Mekhtaal (7/2) breaks from the rail and would’ve won the G2 Nijinsky Stakes on July 22 had they not gone :51 4/5 and 1:17.  By the time he got rolling, it was just too late.  Jose Ortiz picks up the mount and he should get involved early and stay involved late.

Strategy: Hawkbill may not be atop his game and as the 2/1 favorite, he’s hard to love.  His last three races have not been particularly encouraging.  I’ll try to beat him with Mekhtaal, and I’ll also use some of the other longshots I referenced above.

Analysis: Keep an eye on the Churchill Downs Fall Meet.  Horses that run here will come back in the Breeders’ Cup, and horses that run well here will probably do the same at the World Championships.  We know that Churchill can be a track where experience helps, so horses that race in the Pocahontas (and in the Iroquois earlier in the card) may have an edge.

In the Pocahontas, I have reservations about the ML favorite, Serengeti Empress (5/2).  She was my pick to win the G3 Schuylerville at Saratoga on July 20 but she couldn’t keep up with the fast pace and checked in fourth.  Now she tries two-turns for the first time off wins at Indiana Grand and Ellis Park.  Her rail draw makes things simple – send to the front – but there’s other speed in here and she won’t be able to just run them off their feet.

Doug O’Neill has seemingly found a great spot for California invader Splashy Kisses (4/1).  She broke her maiden at Del Mar by almost 6-lengths and projects as a filly who should stretch out and get this distance.

Strategy: I’m going to try to get Splashy Kisses home for the win.  I’ll use her with It Justhitthe Wire, Love My Honey and some others who will benefit from a fast early pace.

Analysis: The ungraded $75,000 Miss Gracie Stakes might just be the best betting race of the afternoon.  11 fillies were entered and four have won at Gulfstream this summer.  That includes the likeliest winner, Treasure for Gold, who is 4-for-7 at Gulfstream, including three straight since June 3.  Midnight Soiree (4/1) ran just as well here on July 7 and I’ll focus my wagers on those two horses.

Strategy: I’ll bet Treasure for Gold to win.  She has really improved this summer and this trip hits her right between the eyes.  She’s drawn a little further outside for my liking, so I’ll back her up with Midnight Soiree and American Frolic, who just always seems to run well on this course.

Analysis: A little bonus coverage for Monday’s top race!  The Presque Isle Downs Master Stakes is a key prep race on the path to the Breeders’ Cup Filly & Mare Sprint and this year’s field is once again loaded.  Defending champion Ami’s Mesa (7/2) is back, but the slight ML favorite is Chicago-based Hotshot Anna (3/1), who has been dominant in her two synthetic races this summer.  She won the G3 Chicago Handicap at Arlington before taking the Satin N Lace Stakes here on August 20.  Graham Motion’s Lady Alexandra is a specialist at this distance and nearly beat the boys in Woodbine’s G1 Highlander Stakes on June 30.  Her draw is rough (#12) but she’ll factor.

Strategy: I’m going to do something I rarely do and just bet my three top choices in a big Exacta Box.  Normally I’d love Ami’s Mesa here – she won this last year with such ease – but she’s been off since April 7 and this race has to be a stepping-stone to the Breeders’ Cup so she shouldn’t be 100% cranked.