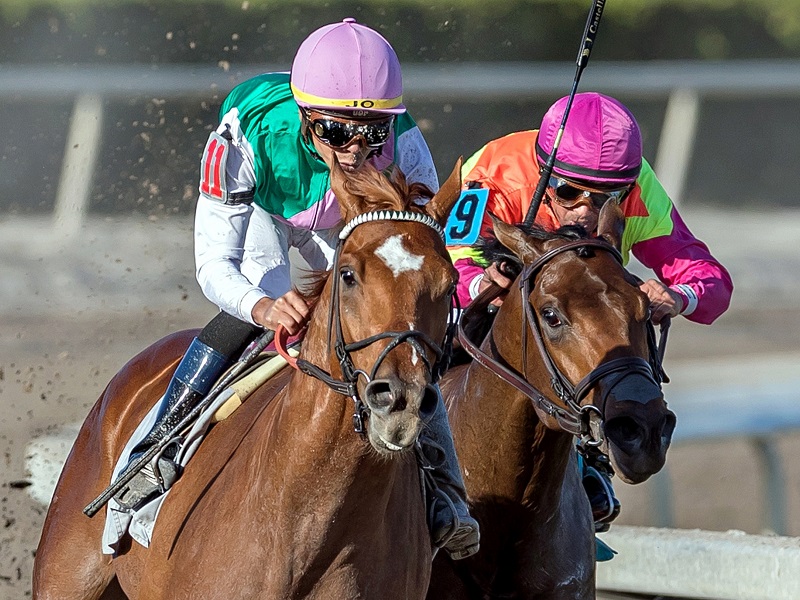 As a horseplayer, it’s easy to press the ‘Pause’ button this weekend.  The Breeders’ Cup is just over a week away and the fields have taken shape.  It’d be easy to spend this weekend away from racing or simply gearing up for the World Championships.

For me, I look at it differently.  This is the last weekend you can bolster your Breeders’ Cup bankroll by hitting big at the windows (or on your computer or mobile device).  I don’t know about you, but for me, there’s no greater feeling than logging into my Xpressbet account on Friday or Saturday morning and seeing a sizable account balance. No ‘Deposit’ button required.

I’ve scoured Saturday’s entries and found five races from coast-to-coast that I feel really strongly about betting.  In the harness world, this Saturday night is as big as it gets as they roll out (pun intended) the Breeders Crown at Pocono Downs.  That’s like the Breeders’ Cup of trotting and pacing.  And at Belmont, Keeneland and Santa Anita, graded stakes races have attracted a number of very intriguing horses.

What an interesting edition of the Grade 3 Bold Ruler Handicap that truly makes me ask wonder if we really need the Breeders’ Cup horses (this week, at least).  Well maybe that’s a little overstated, but hear me out.  This field is actually quite unique.

On one hand, you’ve got the tried-and-true group of sprinters.  The grizzled vets like No Dozing, True Timber and Petrov.  They’re been here, done that in this kind of race.  You look through their running lines and you see races like the Forego, Kelso, Allen Jerkens, Dwyer, Wood Memorial, Carter and Vanderbilt.

But then you’ve got two complete wild cards.  Coal Front, a very talented sprinter for Todd Pletcher, has been on the shelf since he won the G3 Gallant Bob last September at Parx.  He’s 4-for-5 in his life and this looks like a nice comeback spot.  Hard to find fault in a horse whose only loss came in the G1 Allen Jerkens when he finished behind Practial Joke, Takaful and American Anthem.

And then you’ve got the real X-Factor – Delta Prince.  Yep, his name is very familiar.  He’s a G2 winner on the lawn and he just missed by a neck behind Voodoo Song in the G1 Fourstardave at Saratoga in August.  He hasn’t raced on the dirt since November 2016 (and he’s 0-for-2 on the surface) but this horse would’ve been a fringe BC Mile player and instead he’s here.  That alone is worth watching.  If he takes to the dirt like he did the lawn, look out!

First of all, it’s the biggest night of the year in harness racing.  The Breeders Crown.  Championship races from top to bottom.  And (if you're a Thoroughbred player) all of the horses you’ve kinda, sorta heard of in the last year – McWicked, Ariana G, Atlanta, Lazarus, Lather Up and Dorsoduro Hanover – are in action.  If you're a Harness bettor, you know these entrants like the back of your hand.

But more than that, Pocono is offering 15% takeout on EVERY BET this Saturday – and – at Xpressbet, we’re offering a Money-Back Guarantee on the entire card.  Bet a horse in any, or every, race and get your cash back if they finish 2nd or 3rd.

As for the best race on the card, take your pick.  That’s like asking a Thoroughbred gal or guy which is the best Breeders’ Cup race.  Almost impossible.  I will admit that I’m awfully intrigued by the race for 3YO Trotting Fillies, which attracted Atlanta.  She won the Hambletonian earlier this summer and also scored in the Kentucky Futurity at the Red Mile.  She won her Elimination for this by ¾-length and appears poised for one more big run.

For more insights on the Breeders Crown, our Harness Handicapper Al Cimaglia has you covered.  Check him out on Twitter, @AlCimaglia.

Keeneland’s traditional closing day stakes race, the G2 Fayette, attracted a solid field of seven horses and most eyes will be on Bill Mott’s Hofburg.  He’s had a tumultuous 2018 campaign.   He didn’t break his maiden until March 3, but he’s earned $493K in 2018, with the high water marks being a runner-up performance in the G1 Xpressbet Florida Derby and a third in the G1 Belmont.  Unfortunately he missed the Travers and didn’t take to the dirt at Parx in the G1 Pennsylvania Derby.

So he’s here.  A big effort could set him up for a run in the G1 Clark and, ultimately, a try in the G1 Pegasus World Cup in January.  But in order to get there, he needs to beat horses like Rated R Superstar, Hence and Prime Attraction, who ships in from California.

Leofric is a very interesting entrant and my top pick.  He’s lightly raced (just 12 starts) but was good enough to finish 3rd, beaten just 2-lengths, behind Yoshida in the G1 Woodward.  A big showing by Leofric could mean good things for Yoshida in the Breeders’ Cup Classic.  Without much pace signed on, they’ll all need to reel him in and that won’t be an easy task.

For the first time, you’re able to bet the Great Meadow jumps card on International Gold Cup Day from Warrenton, Virginia.  And Xpressbet is a ‘Preferred Wagering Partner’ of the Gold Cup, which is an honor we hold in high esteem.

My focus is on the International Gold Cup, which attracted defending champion Doc Cebu.  He won this race by 11-lengths in 2017 and is a front-running tour de force on this circuit.  He was 9/5 when he won last year, but he’ll be shorter this time around.  Consider using him in an Exacta with Le Chevalier, who has finished first or second in all three of his starts this year.  Last out he won the National Sport Cup at Middleburg last out.

By the way, check out Great Meadow for a ‘throwback’ wager menu on Saturday as it is Win, Place, Show, Exacta and Trifecta betting only.  No multi-race bets offered!  To bet, look for ‘Virginia Gold Cup’ on the Tracklist.

Santa Anita’s Fall Meet has been bolstered significantly by a new, exciting wager (the Rainbow 6) and some great betting races.  Heading into Thursday’s races, the Rainbow 6 carryover is $724,807 and there’s no end in sight. Plus, if you get knocked out of the Rainbow 6, you can still take your shot in the Late Pick 5 and the Late Pick 4, which start in the two subsequent races.

Saturday’s feature race is the G3 Autumn Miss for sophomore fillies and 14 fillies have signed on, ensuring a phenomenal betting race.  The headliners in there are Ms Bad Behavior and Toinette.  Of the two, Toinette is the filly that really interests me.  She’s the only horse to have defeated Rushing Fall, a feat she accomplished in the G3 Edgewood on Kentucky Oaks Day at Churchill.

She was off the board in the G1 Belmont Oaks and has been off since, but she’s twice won off layoffs and should run a big one Saturday.  I’d love to see her progress into a formidable 4YO next year.

Also entered is Rayya. She started her career in Dubai, won the G3 UAE Oaks and ran second (beaten the length of the stretch) in the G2 UAE Derby, won by Mendelssohn.  She’s yet to figure out racing in the States but the surface change could help.

So those are the five races I think you’d be crazy not to bet on Saturday.  What are you looking forward to most? Drop us a message at @Xpressbet on Twitter to let us know!