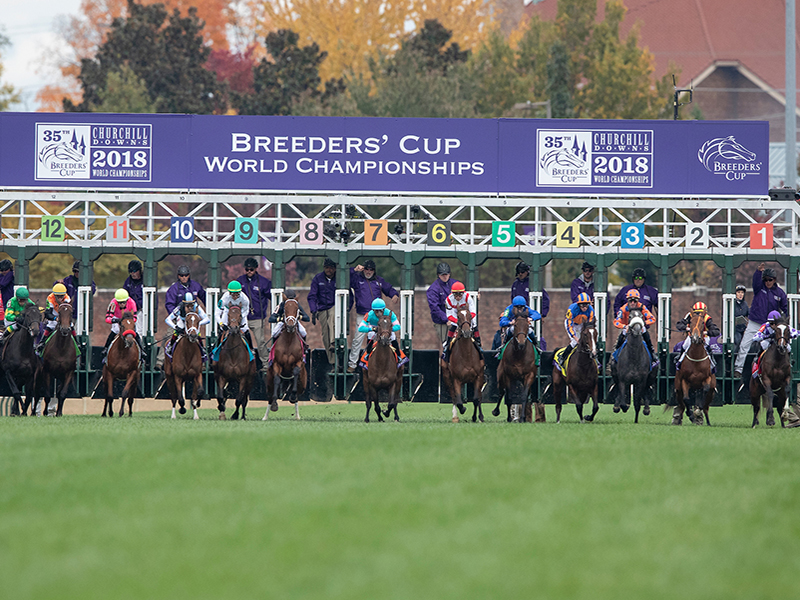 Over half of the all-time Breeders’ Cup exactas paid $100 or more for each $2 play, so it’s understandable why those horseplayers seeking the hammer drop came up empty at the 35th Breeders’ Cup. We witnessed a round of favorites perform to ability – from Newspaperofrecord and Game Winner on Friday to a late pick three sweep on Saturday by Monomoy Girl, Enable and Accelerate. In addition, we saw horses in and around favoritism also turn this Cup into something far less competitive than what many had envisioned – and hoped.

Friday produced no winners over 5-1 odds, and a late pick four netting only $91. It was the sign of things to come. Unless you caught Chelsea Cloisters second in the Juvenile Turf Sprint or Knicks Go in the Juvenile behind Game Winner, there wasn’t a whole lot you could do in respect to big opening day returns.

Saturday got off to a chaotic star with the Filly & Mare Sprint turning out to be the weekend’s only true head-scratcher. We saw the Keeneland preppers dominate this division as historically has been so, but not with the expected performers. Shamrock Rose (25-1) headlined a $700-plus $2 exacta and $6000-plus $1 trifecta. That’s the Breeders’ Cup “you only need one” mentality that we’ve grown accustomed to over the decades. But it was short-lived.

In the very next race, the Turf Sprint went to form with the top three wagering choices eliciting just a $65 exacta for a deuce and $115 dollar trifecta. Those are far cries from the $229 and $1181 averages in the division historically. Stormy Liberal and company set the tone for the rest of the championships.

Even if you tossed 4-5 shot Catalina Cruiser in the Dirt Mile, you got only a $7 winner out of City of Light, along with a $44 exacta for $2 and a dollar tri at $244. Again, those are well off the divisional averages that almost identically mirrored those in the Turf Sprint coming into this year.

Everyone pretty much saw the Filly & Mare Turf on paper as Chad Brown vs. the Europeans. Not only was that correct, but it was the best Chad Brown vs. the best European in the end with 3-1 Sistercharlie over 5-2 favorite Wild Illusion. Take your $2 exacta for $37 and like it, along with the $150 trifecta for a buck. If you sought divisional averages of $156 and $760, you came in at about 20 percent of expectations.

Let’s say you were shrewd enough to toss the favorite in the Sprint, 8-5 proposition Imperial Hint, you still wound up only with $7 winner Roy H in his title defense. The exacta to Whitmore paid $40 for a deuce and the trifecta mustered only $62 for a dollar. Fuhgeddabout $274 and $1319 divisional averages from the previous 34 renewals. This capped a BC-only early pick four that paid $253. If you focused on the most likely winners, you probably could have netted this on a 3x2x3x2 kind of ticket, so you turned $18 into $253. Only the benefit of hindsight would put you on such a chalky path in the Breeders’ Cup.

The Mile provided no respite from reality even with 5-2 favorite Oscar Performance running dead last. The second, co-fourth and third choices managed to sweep the trifecta all in single digits. Expert Eye paying $13.80 turned out to be one a decent bet, but not one you can’t find on any Thursday card anywhere. The $2 exacta for $134.40 might have been the two best returns for your money of any bet on Saturday in terms of return in accordance with chances of success. The $1 trifecta at $450 followed suit. But again these payoffs fell terribly short of historical norms at $300 for the exacta and $3,800-plus on some monster trifectas. There were no monsters to be found; but the 2018 Mile still wound up among the day’s more bountiful possibilities.

The Distaff showdown between Monomoy Girl and Abel Tasman never developed as the latter turned in a second straight stinker performance. Monomoy Girl as the 9-5 chalk scored, but then you had the next three wagering choices below the dueling favorites click in all the superfecta spots. Again, even if you loathed Abel Tasman, the result didn’t give you a lot to work with. An exacta worth $37 and a trifecta returning $90 are totals you can get in any short field anywhere this week without the risk of tossing a Bob Baffert-trained Kentucky Oaks winner. As chalky as the Distaff may seem historically, the averages of $120 and $715 on the exacta and trifectas dwarfed this one.

By the time the Turf came around, price players as the Breeders’ Cup already had been feeling punched out. I had picked Waldgeist in the days leading up to the event because of potential value. But seeing how things played all weekend, my confidence in Enabled not delivering her race were absolutely gone. And give the short intra-race exotics all day, I turned to trying Enabled in doubles to my Classic pick Yoshida in hopes of trying to create a few more percentage points of value. It was that kind of day. Of course, Enabled carried the mail at 4-5, Waldeist was a flat fifth as the 5-1 second choice. But the $2 exacta to 10-1 shot Magical got back only $26 – not a poor return, but not one that’s going to dig anyone out of hole who had been playing prices this weekend. The trifecta got you $252 for a buck if you had 37-1 Sadler’s Joy, who was fourth-best choice in the betting among just the Americans. The Turf hasn’t been a bounty in the past, but its $159 and $556 averages on the exacta/tri still made this one feel meager.

And finally, the get-out special, it-only-takes-one feeling in what was supposed to be a wide-open Classic turned out to be fool’s gold. John Sadler finally got his Breeders’ Cup victory and Accelerate proved why he has been the country’s top handicap horse since the retirement of Gun Runner. The winning favorite was bet to 5-2 odds, about what people thought or maybe a half-point lower; so the public didn’t get overwhelmed by any trainer talk and stats. They bet the race pretty straight up and were correct. Gunnevera probably deserved to be 30-1 in the win pool, but given his running style, he absolutely made sense as an exotics player. That the $2 exacta paid $260 behind the favorite was an outstanding payout in risk vs. reward. The trifecta at $1612 with Dubai World Cup winner Thunder Snow in third easily was the best payout on Saturday that you look back and say, “I could have had that, and it paid very well.” Both of these payouts actually were above average in historical payouts for a Classic as well – despite a winning favorite. If you were playing chalk late you got a $37 pick three for a buck with Monomoy Girl, Enable and Accelerate. There are easier places in racing to find $37 pick threes, obviously, though the $315 pick four dialing back to Expert Eye in the Mile wasn’t bad at all if you limited combinations and strongly sought the favorites.