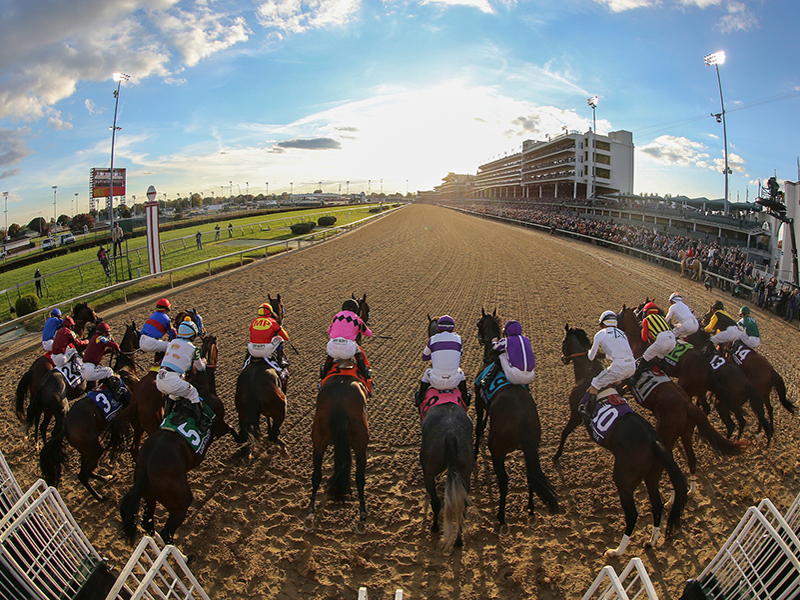 Handle numbers proved disappointing at the 2018 Breeders’ Cup. The $157 million bet over Nov. 2-3 ranked only fifth-best among the championship’s two-day events since expanding in 2007. Consider that Churchill Downs handled $173 million in 2010 in its first go as a two-day Cup host site. That’s a $16 million slide from the Breeders’ Cup that culminated with Zenyatta’s swan song, and $4 million short of a 2011 Churchill Downs’ hosted event that may match up more similarly in terms of interest.

Wagering in the US is up in 2018 at nearly every point of call, about 4% overall through the first three quarters of the year compared to 2017. Things like a Triple Crown are supposed to buoy interest and mainstream exposure, though we’ve almost forgotten we’re only 5 months removed from Justify. And though Justify’s big day at Belmont narrowly out-handled even that of American Pharoah from 2015, the momentum did not continue to the Breeders’ Cup.

The Breeders’ Cup brass will rack its brains to figure out what hit and what missed. An event that once got its primary source of funding from nomination fees at birth has seen its foal crop decrease from the 40,000 per year mark in its infancy to about 19,000 in current times. It doesn’t take a mathematician to figure out the Breeders’ Cup has become the Bettors’ Cup in terms of necessary revenue stream.

While Enabled provided international name cache in the Turf, the 2018 Breeders’ Cup did lack a major domestic phenomenon to capture interest. But let’s be honest: That’s the case in probably 30 of the 35 Breeders’ Cup editions ever held. We’ve only had 4-5 transcendent Breeders’ Cup horses in this era who could turn common sports fans into interested parties, and that’s not even to say interested bettors. Think Zenyatta, Cigar, American Pharoah – and the latter’s 2015 Breeders’ Cup was one of the worst-handled two-day events in history.

So we can’t blame the Breeders’ Cup slide on Justify’s absence. And we certainly can’t blame the venue. Churchill Downs’ 2010 event is the standard-bearer for BC handle on a two-day event. More than 112,000 attended this year’s event on-track, giving Churchill Downs three of the four such crowds to top 100,000 in Breeders’ Cup history. Weather and conditions, while soggy on the grass, wound up much better than expected and had a negligible influence on any decision-making at the windows.

Another factor you can’t blame is churn. When 11 of the 14 races are won by either the favorite or second betting choice at post time, far more people were cashing tickets at this Breeders’ Cup than most any other. The last seven races on Saturday all went to public choices No. 1 or 2. Even those fence-swingers in wagers like the pick four and pick five found more consistent returns than expected. The only longshot of the entire weekend, Filly & Mare Sprint upsetter Shamrock Rose (25-1), came in a race that was not included in any of the Breeders’ Cup pick four or pick five bets (tied only to an undercard sequence). She didn’t bust any tickets and slow churn.

The two-day format to place all the two-year-old races on “Future Stars Friday” did not seem to be the culprit for the handle slide overall. Personally, I was completely disinterested in betting Friday and my handle breakdown was 0% Friday and 100% Saturday after learning of the scratch of Code of Honor in the Juvenile. With Newspaperofrecord in the Juvenile Fillies Turf and Game Winner then standing alone and stout in the Juvenile, I took Harvey Pack’s trip to El Paso. But that was the exception, not the rule. Friday handle held its own historically.

The earlier timeslot on Saturday has been blamed some as a factor. Everything wrapped before 6 pm ET, 3 pm PT on Saturday. That’s the same timeframe we dealt with at Keeneland in 2015 when even American Pharoah’s presence in the finale could only muster $149 million for the weekend – despite an NBC TV audience about three times what we’ve seen in recent Cups since. Consider the later post times at Churchill in 2010 and 2011 (about an hour later into the evening), as well as the pacific timezone norms that we’ve grown accustomed to as the BC has become more California-centric. A west-coast Classic at Del Mar ran at 8:46 pm ET, a minute later than what we had at Santa Anita the year prior.

Given the trajectory of wagering in the US this year and what we’ve come to expect from Breeders’ Cup handle performances at Churchill Downs, the most telling factor in this year’s handle slide to me may be as simple as the time of day. California and the pacific time zone are so very important to wagering dollars. Forcing their bets between 9 am and 3 pm PT could be a mistake worth avoiding.

Television contracts with NBC and available windows based on Notre Dame football are a reality that the Breeders’ Cup must deal with in its current media plan. But on Nov. 3 this year, the Irish were on the road at Northwestern and therefore broadcast on ESPN. Assuredly costs go up as you drift into the evening hours vs. a Saturday afternoon. It’s also notable that TV ratings skyrocketed in 2015 with American Pharoah in the gate, nearly triple of what Gun Runner drew in 2017 with a later timeslot. The bottom line is that the pursuit of TV ratings and handle don’t necessarily coincide.

If the bottom line is the betting bottom line, it would seem the Breeders’ Cup would be best-served to consider its pacific timezone customers as a higher priority to most anything else.