A Trivia Question to Ponder 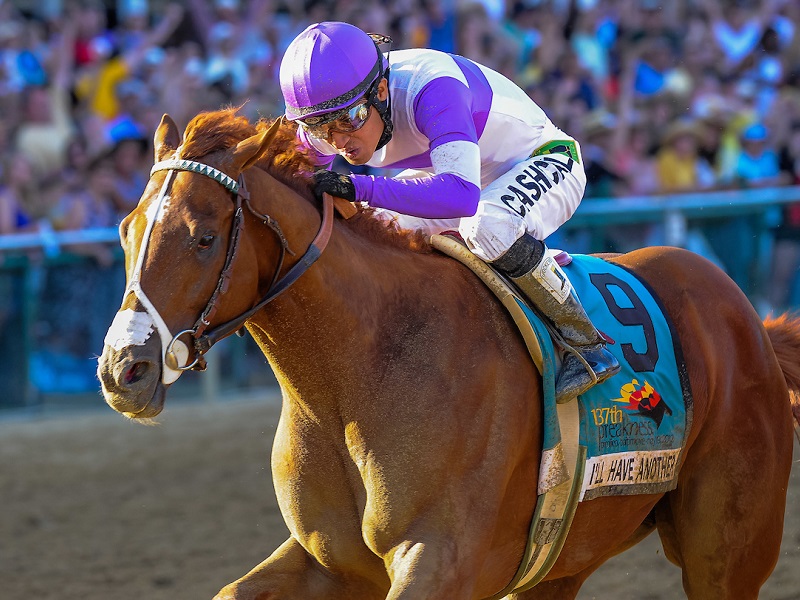 Can you answer the following trivia question? From the first Daily Racing Form poll in 1936 and continuing on through the Eclipse Awards era that began in 1971, just one 3-year-old male champion has not been sent away as the favorite in at least one of his races at 3. Who was it?

It’s a tough question, right? If you don’t know the answer, to help you out, here is the list of 3-year-old male champions in the DRF poll and Eclipse Awards going back to 1936:

Okay, which one of the horses on the above list was not the favorite in any of his races that year?

I’LL HAVE ANOTHER RETURNS TO U.S. FROM JAPAN

After I’ll Have Another was retired from racing in 2012, he began a new career the following year as a sire in Japan. But he is returning to this country to stand at Ballena Vista Farm in California for the 2019 breeding season.

I’ll Have Another raced for Paul and Zillah Reddam. Trained by Doug O’Neill, the chestnut colt won one of three starts as a 2-year-old. I’ll Have Another then was victorious in all four of his races at 3.

I became a big I’ll Have Another fan after he made his 3-year-old debut in Santa Anita’s Grade II Robert B. Lewis Stakes (nee Santa Catalina Stakes) at 1 1/16 miles in early February. A Rodney Dangerfield in the wagering that day, he went off at over 40-1. Liaison, from the Bob Baffert barn, was sent away as the 3-2 favorite.

I’ll Have Another’s final time in the Lewis has the distinction of being the fastest on dirt in the history of the race through this year. The only better final Lewis clocking was Crown of Thorns’ 1:40.76 on a synthetic surface in 2008.

Despite I’ll Have Another’s huge odds when he won the Lewis, I did not think there was anything fluky about it. Keep in mind that when I’ll Have Another posted that splendid 1:40.80 clocking in the Feb. 4 Lewis, he was making his first start since Sept. 5.

My respect for I’ll Have Another grew when I observed a brilliant workout by him between races at Santa Anita on March 3. This is what I wrote here in my Xpressbet.com column after that workout:

“Between races last Saturday at Santa Anita, I’ll Have Another raised eyebrows by working six furlongs without company in 1:10 flat for trainer Doug O’Neill. The colt was escorted to his workout by 11-year-old two-time Santa Anita Handicap winner Lava Man, who is a pony these days for O’Neill.

“The same electronic timer utilized for Santa Anita’s races was used for I’ll Have Another’s workout Saturday. The interior fractions were :24, :47 1/5 and :58 1/5.

“I timed I’ll Have Another’s workout from the press box on my phone. This was the first workout I have ever timed using a cell phone. Racing broadcaster Randy Moss, a visitor to the Santa Anita press box, likewise timed the work on his cell phone.

When I’ll Have Another made his second start at 3 in the Grade I Santa Anita Derby at 1 1/8 miles on April 7, he was 4-1 in the betting. Creative Cause was the odds-on favorite at 4-5. I’ll Have Another and Gutierrez won by a nose.

These were my selections here in my Xpressbet.com column for the 2012 Kentucky Derby:

Bodemeister was sent off as the 4-1 favorite in the field of 20. Unraced at 2, Bodemeister went into the Kentucky Derby off a scintillating 9 1/2-length victory in the Grade I Arkansas Derby at Oaklawn Park for Baffert.

Bodemeister set a torrid early pace (:22.32, :45.39, 1:09.80). I’ll Have Another alternated between racing sixth and seventh through the early stages while wide. When Bodemeister boasted a three-length lead with a furlong to go, it appeared that he might not be caught. But I’ll Have Another came on resolutely and overtook Bodemeister in the final sixteenth. I’ll Have Another won going away by 1 1/2 lengths while registering a very good final time of 2:01.83.

Andrew Beyer, the father of the Beyer Speed Figures, has said that he believes Bodemeister, not I’ll Have Another, was the best horse in the 2012 Kentucky Derby. Many others have said likewise. I cringe each time I hear it. They say Bodemeister ran a marvelous race to finish second after setting such a ridiculously fast pace. They say Bodemeister would have won if he had not been pushed early by the speedy Trinniberg, who would be voted a 2012 Eclipse Award as champion male sprinter.

I’LL HAVE ANOTHER WON REMATCH IN PREAKNESS

I do not disagree that Bodemeister set a wickedly fast pace in the Kentucky Derby. But if Trinniberg was the reason Bodemeister did not win the 1 1/4-mile Derby, then why was Bodemeister unable to beat I’ll Have Another in their rematch in the shorter Preakness at 1 3/16 miles when there was no Trinniberg in the field?

Those who proclaim Bodemeister was the best horse in the 2012 Kentucky Derby also seemingly do not take into consideration that I’ll Have Another raced wide after breaking from post 19. I’ll Have Another’s trip, according to Trakus, was approximately five lengths farther than Bodemeister’s.

Bodemeister did indeed have an easy time of it on the front end in the early going of the Preakness with no Trinniberg to deal with. This time Bodemeister was allowed to set a moderate pace, carving out early fractions of :23.79, :47.68 and 1:11.72.

As in the Kentucky Derby, Bodemeister sported a three-length lead with a furlong to go in Preakness. Again at this point, it looked like Bodemeister might not be caught. But I’ll Have Another made a determined late run to get up in the final yards to prevail by a neck. Bodemeister again had to settle for second. I’ll Have Another’s final time was 1:55.94.

After I’ll Have Another won the Kentucky Derby and Preakness, he appeared to have an excellent chance to become a Triple Crown winner. He was installed as the 4-5 morning-line favorite in a field of 12 entered in the June 9 Belmont Stakes.

However, the morning before the 1 1/2-mile Belmont, Paul Reddam announced that I’ll Have Another was going to be scratched from the race and retired due to a tendon injury. Union Rags won that Belmont.

If I’ll Have Another had been able to run in the Belmont, I think he probably would have won it to complete a Triple Crown sweep. The Beyer Speed Figures seem to support this.

I’ll Have Another was credited with Beyers of 101 in the Kentucky Derby and 109 in the Preakness. Union Rags recorded a career-best 96 when he won the Belmont.

Reddam sold I’ll Have Another to Japan’s Big Red Farm, owned by Shigeyuki Okada, for $10 million. According to Reddam, he received only two offers from American breeding farms: one for $3 million, the other for $2.5 million. So it was a no-brainer for Reddam to sell I’ll Have Another to Okada.

On June 26, 2012, before I’ll Have Another was shipped to Japan to begin his stud career, I visited him at O’Neill’s Hollywood Park barn. I was sad that he was leaving the U.S.

Okada hoped that I’ll Have Another as a sire would become another Sunday Silence.

After Sunday Silence was retired from racing in 1990, he became a phenomenally successful sire in Japan, something I’ll Have Another did not come close to doing.

The truth is, while Bodemeister lost both times he faced I’ll Have Another, Bodemeister, who stands stud duty at WinStar Farm in Kentucky, has turned out to be a much better sire than the former Reddam colorbearer.

Just last Saturday, a son of Bodemeister by the name of Risky Proposition won the Let It Ride Stakes at Del Mar.

Of much more significance, Bodemeister is the sire of Always Dreaming, who won the Grade I Kentucky Derby in 2017. Bodemeister also has sired Grade II winner American Anthem and Grade III winners Yuvetsi and Once on Whiskey.

By comparison, I’ll Have Another has not sired a single graded stakes winner.

Bodemeister is a son of 2003 Belmont Stakes winner Empire Maker and the Storm Cat mare Untouched Talent. Empire Maker’s sire, Unbridled, was voted a 1990 Eclipse Award as champion 3-year-old male after winning the Kentucky Derby and Breeders’ Cup Classic that season. Empire Maker and Unbridled both have done quite well as sires, especially Unbridled. Storm Cat is one of the finest sires of all time.

I’ll Have Another is a son of 2005 Travers Stakes winner Flower Alley and the Arch mare Arch’s Gal Edith. Flower Alley pretty much was a dud at stud other than siring I’ll Have Another. At least there is something of a positive on the bottom side of I’ll Have Another’s pedigree in that Arch managed to sire Blame, who was voted a 2010 Eclipse Award as champion older male. Blame highlighted his 2010 campaign by winning the Breeders’ Cup Classic by a dramatic head to hand the great Zenyatta the only defeat in her 20-race career.

I will forever remain a member of the I’ll Have Another fan club. As such, while I am disappointed that he did not do better as a sire in Japan, I was delighted it was announced that his home will be in California. I certainly am rooting for him to do well at Ballena Vista Farm.