Great Six Pack of Races (and Picks) for Saturday, November 17 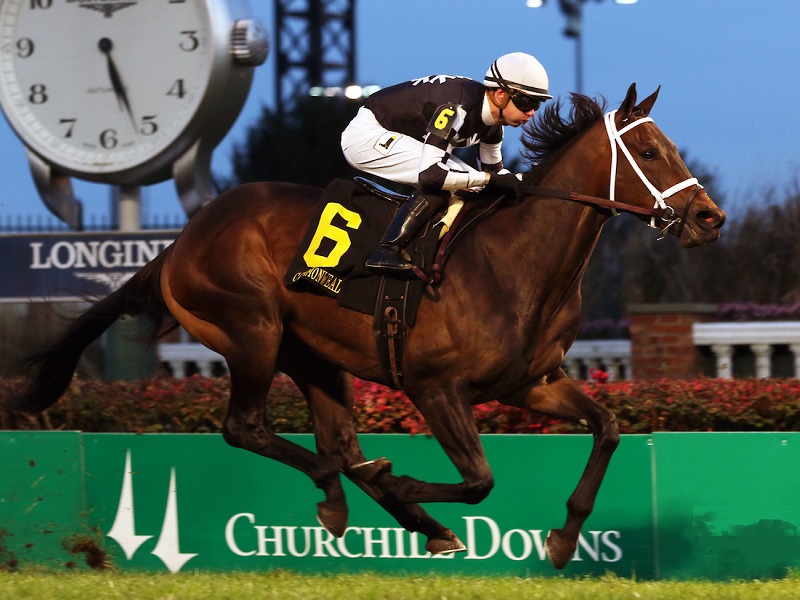 It’s a great weekend for horse racing, but let’s be honest – to avid bettors, they all are.  No, the Breeders’ Cup horses aren’t back yet, but that will come next weekend when 20+ stakes races grace our calendars.  And no, the track list isn’t the sexiest, but there’s still money to be made at Aqueduct, Churchill, Del Mar, Golden Gate, the Fair Grounds and more.

A word of caution for this weekend – keep a close eye on cancellations, track conditions and changes.  On Thursday, winter weather struck the East Coast and Aqueduct, Laurel, Penn National and Charles Town cancelled and races come off the turf pretty much everywhere not named Del Mar, Gulfstream West, Fair Grounds or Golden Gate.

*Sneak Preview Alert* – Next Thursday through Sunday, Xpressbet will be running a $10,000 Thanksgiving Contest.  It’s free to play (you have to opt in) and to win your share of ten grand all you have to do is place winning wagers on 12-of-24 stakes races that weekend.

We’ll also have promos in store for Black Friday and Cyber Monday, so keep checking out Xpressbet for the latest updates.

Here are the six races I’m looking to most this Saturday, along with some picks for each.

I don’t frequently circle short-field allowance races that fall outside the late multi-race exotics, but it’s great to have #4 SUNSET RIDGE (1/1) back.  The NY-bred daughter of Algorithms is trained by Chad Brown and is a perfect 4-for-4 in her career.  After breaking her maiden by ‘only’ a length, she won her next three starts by a combined 30 1/2 lengths last summer. She’s been on the pine since August ’17 but this is a filly that could make a big name for herself in 2019.

There isn’t much turf racing in New York and that was evident at the entry box as just about everyone and their stablemate entered this one.  It’s a bummer that #12 FOCUS GROUP (3/1) got stuck on the AE list when much less heralded horses made the main body of the field.  That said, this race still attracted some very classy horses, including six G3 winners.  Veterans like #6 CALL PROVISION (7/2), #7 INSPECTOR LYNLEY (9/2), #8 BIGGER PICTURE (5/1) and #3 ZULU ALPHA (5/2) make this one a great betting race.  The turf course at the Big A has always been a quirky one, so I’m going to give the nod to horses with positive local experience.  CALL PROVISION is 3-for-4 in his career here and is my top pick.  BIGGER PICTURE is also a two-time winner at Aqueduct.  If the race comes off the lawn, #14 CONTROL GROUP (2/1) and #15 EXULTING (7/5) would draw in and be very effective.

#3 MR. MISUNDERSTOOD (8/5) was a win machine in 2017 when he went 7-for-8 and earned $369K.  Victories haven’t been quite as easy to come by this year, as he’s just 2-for-7.  They took their shots with him in races like the G1 Makers’ 46 Mile and the G1 Shadwell Turf Mile and he came up a little short in both.  A mile is probably a little short for him anyway.  He’s 3-for-3 at Churchill and he’s probably the one to beat.  That said, his stablemate, #5 BIG CHANGES (5/1), overcame a tough outside post in a salty allowance race at Keeneland on October 12 and he’s won all five of his races this year, including stakes events at Louisiana Downs, Evangeline Downs and Mountaineer.  This is a big step in class but he’s earned it. For a longshot, I’ve circled #6 TEAM COLORS (12/1).  I loved his last race at Keeneland (also on the 12th of October) and he’s put things together on the lawn after his dirt career fizzled.

Golden Gate’s Rainbow Pick 6 carryover is on the cusp of $50K and that’s worth noting on a day like Saturday when weather will be an issue.  No such issues at Golden Gate, where the main all-weather track is always fast.  #9 AWESOME ANYWHERE (6/5) is a probably single for Jerry Hollendorfer. He’s 2-for-3 at Golden Gate and just ran the race of his life at Santa Anita, winning a small allowance by 7 1/4-lengths.  Overall he’s won three in a row and just looks the part.  The only worry is he’s drawn outside and there is speed inside of him.  If he gets caught wide and loses ground throughout, Hollendorfer’s ‘other’ horse - #3 ANNIE’S CANDY (4/1) – is worth a look.  He’s 4-for-5 at Golden Gate and has a closing kick.

I’m always on the lookout for singles and I think #6 BIBLICAL STRENGTH (8/5) is a standout in Delta’s second, which wraps up the Early Double and is the second leg of a Pick 4.  He’s 2-for-2 since being claimed by Karl Broberg and Broberg’s go-to local jock, Tim Thornton, keeps the mount.  He drew right and I think he’ll track #3 OSO READY (5/2), put him away and keep the closers at bay.  Later on the card (Race 6) is the $75K Delta Mile, which attracted a field of eight. I’m partial to #7 MOCITO ROJO (9/2), who loves the local track (5-for-7 career at Delta).

Nice race for two-year-olds and while these ones weren’t quite good enough for the Breeders’ Cup a few could make noise down the line.  Bob Baffert’s #3 MUCHO GUSTO (5/2) is a wishful 5/2 on the ML but that price will be around even-money when the bets start coming in.  He won his debut at Los Al by 5-lengths and was $625K son of Mucho Macho Man so he definitely looks the part.  His stablemate, #1 METROPOL (4/1) also broke his maiden at a short price recently but he only scored by 3/4-length that day and he won’t be backed as much.  The rail draw hurts too.  #2 EXTRA HOPE (7/2) looked like a monster when he added blinkers and broke his maiden by 8 3/4-lengths last out at Santa Anita.  That was his fourth try and his first good race.  He’s run two straight routes and the cutback in distance may suit him. For a longshot, I like #7 SUENO (15/1). He broke his maiden for an $80K tag at Del Mar on August 31 but he looked like a good horse that day and he has positive experience at Del Mar.