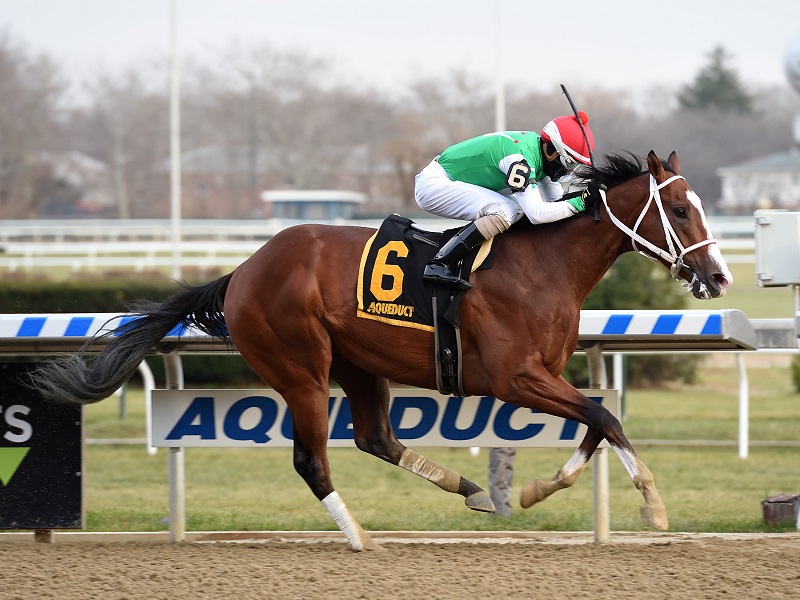 Is Maximus Mischief another Smarty Jones?

Smarty Jones won his first two career starts as a 2-year-old in 2003, both at Philadelphia Park, the track now known as Parx Racing. He won those races by 7 3/4 and 15 lengths. Smarty Jones then made it three for three with a victory at Aqueduct. He took the Count Fleet Stakes at the Big A early in 2004 on Jan. 3.

Maximus Mischief won his first two career starts as a 2-year-old in 2018, both at Parx Racing. He won those races 8 3/4 and six lengths. Maximus Mischief then made it three for three with a victory at Aqueduct. He took the Grade II Remsen Stakes at the Big A last Saturday.

After Maximus Mischief’s maiden victory at 5 1/2 furlongs on Sept. 29 at Parx, Dick Jerardi told Daily Racing Form’s Jay Privman that this was the best horse from Parx since Smarty Jones. Jerardi knows his stuff. An award-winning turf writer, Jerardi is a member of the team that calculates Beyer Speed Figures.

After the 2003 Count Fleet, Smarty Jones kept his unbeaten record intact by reeling off three consecutive wins at Oaklawn Park. He took the Southwest Stakes, Rebel Stakes and Grade II Arkansas Derby. Smarty Jones then stayed unbeaten by capturing the Grade I Kentucky Derby at Churchill Downs and Grade I Preakness Stakes at Pimlico. He finally lost for the first -- and only -- time when thwarted in his bid for a Triple Crown sweep. He finished second, one length behind Birdstone, in the Grade I Belmont Stakes at Belmont Park.

The “Smarty party,” as it became to be known, came to an end after the June 5 Belmont Stakes, which turned out to be the colt’s final race. On Aug. 2, Smarty Jones’ retirement was announced. It was reported that the Kentucky-bred son of Elusive Quality would not race again and go to stud due to chronic bruising of his ankle bones.

Will Maximus Mischief be like Smarty Jones and go on to win the Kentucky Derby and/or Preakness? As they say, time will tell.

The bad news for Maximus Mischief vis-a-vis the Kentucky Derby is that it’s been a long time since a Remsen winner also has won the Run for the Roses. The last horse to win both races was Thunder Gulch, who took the Remsen in 1994 and Kentucky Derby in 1995.

Catholic Boy this year made it 23 consecutive Remsen winners who did not subsequently succeed in the Kentucky Derby. However, Catholic Boy did have a fine 2018 campaign, highlighted by victories in the Grade I Belmont Derby on the grass and Grade I Travers Stakes on the dirt at Saratoga.

Regardless of what the future holds for Maximus Mischief, he did prove a lot in the Remsen. The bay colt demonstrated that he:

--Can win on a surface other than Parx’s main track.

--Has the class to win at the Grade II level. This was his stakes debut.

--Possesses the stamina to win a 1 1/8-mile contest around two turns. His two races at Parx were going seven furlongs or shorter around one turn.

Ridden by Frankie Pennington and trained by Butch Reid, Maximus Mischief balked at going into the gate for the Remsen, but he then started “beautifully,” as noted by track announcer Frank Mirahmadi.

“For a big horse, he’s light on his feet and springs out of the gate well,” Reid said Monday morning to Steve Byk on his radio program At The Races.

Reid added that the Kentucky-bred colt “is a good athlete.”

After Maximus Mischief’s alert start, he raced on or just off the lead the entire way. The fractions through the first six furlongs were :25.12, :50.67 and 1:14.60. Coming into the stretch, Maximus Mischief found himself battling for command with Tax.

Maximus Mischief put away Tax to have a 2 1/2-length lead at the furlong marker, then kept to his task in the final furlong to prevail by 2 3/4 lengths as the 7-5 second favorite. Network Effect, the betting choice at a bit over even money, came home willingly to finish second in the field of seven. Tax ended up third, a half-length behind Network Effect.

Completing his journey in 1:51.34, Maximus Mischief was credited with a 97 Beyer Speed Figure. It should be noted that whether or not he does come anywhere close to accomplishing what Smarty Jones did at 3, Maximus Mischief’s 97 Beyer in the Remsen is the best figure by a Remsen winner in the last six years.

These are the Beyers for winners of the Remsen going back to 1991:

Following Maximus Mischief’s Remsen victory, he returned to Parx Saturday evening. According to Reid, the colt emerged from the race “perfectly.” In NYRA communications’ Aqueduct notes, Reid said Sunday that Maximus Mischief was a little tired after the race, “but he’s on his toes this morning.”

“The most impressive part was how he acted in the paddock and all the prerace stuff,” Reid said, “because he can be a handful in the paddock. In his new surroundings, he handled it very well. He stood perfectly in the paddock, which at Aqueduct can be a little foreboding. He handled it great and was cool as a cucumber. He stood there perfectly when we put the tack on him. I was pretty confident with the way things were going after that.”

Whereas Smarty Jones went the Arkansas route to the Kentucky Derby, Maximus Mischief is scheduled to race probably twice at Gulfstream Park prior to the big race at Churchill Downs on the first Saturday in May.

“We’re going to give him a little break, but then we’ll be heading down to Florida in the next few weeks,” Reid said. “We’ll get him used to the weather down there and get him ready to start his 3-year-old campaign.”

Reid told the DRF’s David Grening that the plan is for Maximus Mischief to likely run in either the Grade II Holy Bull Stakes Feb. 2 or Grade II Fountain of Youth Stakes on March 2 prior to the Grade I Florida Derby on March 30.

Despite the Kentucky Derby drought by Remsen winners, those who bet on Maximus Mischief at 26-1 in Pool One of the 2019 Kentucky Derby Future Wager (KDFW) on Nov. 25 no doubt were pleased to see the colt run so well last Saturday.

Here were the final odds for Pool One of the 2019 KDFW:

Meanwhile, another consequence of Maximus Mischief’s Remsen triumph is it likely brought a smile to those who bet on his sire at 7-1 in the 2019 Kentucky Derby Sire Future Wager. Maximus Mischief is by Into Mischief.

Into Mischief also is the sire of Instagrand, who won both of his starts impressively during the summer in Southern California. He cruised to a 10-length victory in a five-furlong maiden special weight race at Los Alamitos on June 29 in his debut. He then won Del Mar’s Grade II Best Pal Stakes by 10 1/4 lengths at six furlongs on Aug. 11.

After the Best Pal, it was decided that Instagrand would not race again in 2018. He was sent to Kentucky to take it easy for the rest of the year. The Kentucky-bred Into Mischief colt, who sold for $1.2 million at public auction last March, now is back in training with Hall of Famer Jerry Hollendorfer at Santa Anita.

Here were the final odds on Nov. 25 for the 2019 Kentucky Derby Sire Future Wager:

Tapit is the sire of Coliseum and Magic On Tap, a pair of youngsters trained by Bob Baffert.

Coliseum raised eyebrows when he won a seven-furlong maiden special weight race by 6 3/4 lengths on Nov. 17 at Del Mar in his only start so far. He had a splendid workout Tuesday morning at Santa Anita, a bullet four furlongs in :47.00, fastest of 82 at the distance.

Magic On Tap won a 6 1/2-furlong maiden special weight race by 2 1/2 lengths on Sept. 1 at Del Mar. That has been his lone start to date.

Vekoma, two for two, is another prominent Candy Ride colt. He won Aqueduct’s Grade III Nashua Stakes by 1 3/4 lengths at one mile on Nov. 4 for trainer George Weaver. The runner-up in the Nashua was Network Effect, who then also finished second in last Saturday’s Remsen.

Hall of Famer Baffert appears to have an excellent chance to win yet another Los Alamitos CashCall Futurity this Saturday. He sends out Improbable, who is two for two, and Mucho Gusto, likewise two for two, in the Grade I race that will be contested at 1 1/16 miles.

Improbable, a Kentucky-bred City Zip colt, is coming off a sparkling 7 1/4-length win in the one-mile Street Sense Stakes at Churchill Downs on Nov. 7. He recorded a sharp workout Monday at Santa Anita, five furlongs in a bullet :59.80, fastest of 67 at the distance.

Here is the list of Baffert’s 10 Los Al Futurity winners:

I will be surprised if someone other than Improbable wins Saturday.