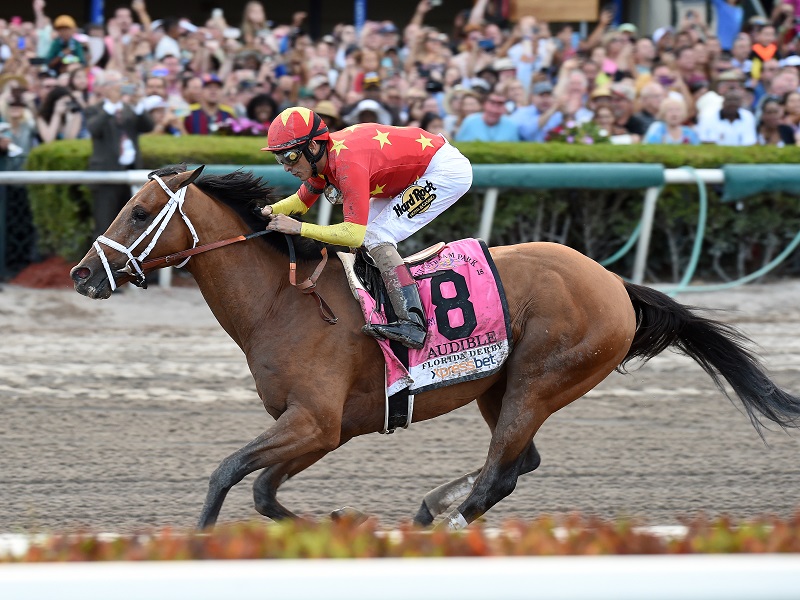 It’s time for another big Saturday in South Florida as Audible (pictured above) and some others put in their final preparations for the big Pegasus World Cup card on Saturday, January 26.

Audible, who goes in the Gr III, $100K Harlan’s Holiday Stakes on Saturday, is earmarked for the $9 Million Pegasus World Cup.  He won last year’s Xpressbet Florida Derby and finished third in the Kentucky Derby.  Assuming he runs as well as he’s expected to here, he’ll be one of the top choices for the Pegasus.

Similarly, the $7 Million Pegasus World Cup Turf could be bolstered by a number of the entrants in Saturday’s Gr II, $200K Ft. Lauderdale Stakes.  Veterans like Divisidero, Projected, Glorious Empire, Almanaar, Qurbaan and Inspector Lynley are entered here and any would make a nice addition to the Pegasus Turf field.

Plus, races like the Rampart, My Charmer and Sugar Swirl, while not direct pipelines to the big multi-million dollar Pegasus races, will deliver horses to race on the undercard, so keep a close eye on those races too.

Gulfstream’s got an All-Stakes Late Pick 4 Saturday.  It kicks off with Race 8 at 3:34PM ET and if you hit it with your Xpressbet account, you’ll win a Split of 1 Million XB Rewards Points.

Here’s how I’m betting it:

The kickoff leg is of the All-Stakes Late Pick 4 is the Rampart Stakes for fillies and mares and this is the type of race that can trip you up if you aren’t careful.  With only seven entrants, common sense says to go ‘light’ here so you can go ‘heavy’ later.  Problem is, none of these horses is reliable.  TEQUILITA (6/1) is winless since 2017.  She does like Gulfstream, though, which is an asset.  The Jorge Navarro-trained duo of TWEETING (8/5) and BREAKING BAD (4/1) are both intriguing, as is Chad Brown’s ELECTRIC FOREST (3/1).  My colleague, Jeremy Plonk, covered this race in-depth in his Xpressbet Race of the Week blog.

This looks like a great race for NY-bred LA MONEDA (5/1) to shine.  She’s consistent as can be (6-for-9 on turf in her career) and has never lost at this distance.  She’ll get a great pace setup and John Velazquez takes the mount and you can never argue with a Hall of Fame rider getting into the saddle.  If she falters for some reason, BELLAVAIS (4/1) will also be on my ticket.  She breaks from the rail and just won an allowance race at Belmont.  I’ve waited forever for CAPLA TEMPTRESS (7/2) to get back to her winning ways and this may be the time she does as she won’t be on my ticket.

Hard to figure out STORMY EMBRACE (3/1).  When she wants to run, she blows fields like this away.  But when she doesn’t feel up to it, she barely lifts her feet.  She does love Gulfstream – she’s 4-for-8 locally but even her last race here was a shocking loss at low odds.  I think you have to lose her, but you also have to protect against something going amiss.  DREAM PAULINE (4/1) was regarded enough to be entered into the BC Filly & Mare Sprint and while she finished an OK third at Churchill in the Dream Supreme (she didn’t make the cut for the BC), that field wasn’t chopped liver.  AWESTRUCK (2/1) will take money but to me she’s an underneath horse that doesn’t like to win races.

The signature race of the day and you’ve got 16 horses to sort through.  QURBAAN (5/1) is a ‘must use’ to me.  He won the G2 Bernard Baruch at Saratoga and was third in the G1 Shadwell Turf Mile at Keeneland.  He’ll need racing room, though.  GLORIOUS EMPIRE (12/1) will play ‘catch me if you can’ but his best races were all up in New York and the sod is a little different in South Florida.  Chad Brown’s PROJECTED (4/1) always runs well and ALMANAAR (10/1) has put in good efforts at Gulfstream.  MR HAVERCAMP (15/1) will get a good trip and ZULU ALPHA (12/1) is finding his best stride.  ZENNOR (15/1) would be dangerous if he draws into the field.